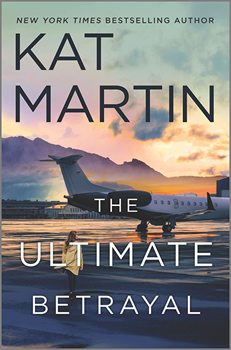 Bestselling author Kat Martin turns up the heat in THE ULTIMATE BETRAYAL, Book 3 in her Maximum Security romantic thriller series.

Bran Garrett, a bodyguard at the Garrett family’s security company, is shocked when Jessie Kegan—the sister of his best friend and Delta Force partner, Danny Kegan, who died protecting Bran on a mission in Afghanistan—shows up at Maximum Security. When gunfire shatters windows in the security office after her arrival, it’s obvious Jessie needs a bodyguard.

Jessie’s father, Colonel James Kegan, was in charge of weapons destruction at the US Army’s Alamo Chemical Depot in Colorado. When 15 thousand pounds of chemical weapons went missing under his command, he was arrested, and then died in the Fort Carson stockade from a heart attack. Jessie doesn’t believe her father betrayed his country, and the investigative journalist in her has pieced together clues that might lead to his exoneration. She’s convinced someone framed and murdered her father before he could defend himself.

As assailants track Jessie’s movements at every turn—trying to end her probe by whatever means necessary, including murder—Bran fights off the men trying to kill her. While struggling to stay one step ahead of the mastermind behind the weapons heist, Bran and Jessie can’t ignore the sexual tension between them. But Bran doesn’t do intimate emotional relationships, and Jessie has secrets of her own that might make an affair impossible.

Can Bran and Jessie find the chemical weapons and clear her father’s name? And will the electricity between them result in a newfound devotion to each other that neither anticipated?

Martin combines the suspense of a thriller with romantic sexual tension and desire. She talks with The Big Thrill about romantic thrillers and how she inserts passion into her stories.

Was there a particular inspiration for THE ULTIMATE BETRAYAL?

I’d decided to write a book set in Colorado, maybe even a new series. I was doing some research and ran across an article about the Army Chemical Depot near Fort Carson. I started thinking… wouldn’t it make a great plot if someone stole chemical weapons from a place like that? I wonder if it could be done? How would the good guys catch them? So I was off on a plot that turned into THE ULTIMATE BETRAYAL.

Having written more than 65 novels, how do you create such varied story and character ideas?

After so many novels, it’s getting more and more difficult to come up with something fresh. As in THE ULTIMATE BETRAYAL, the ideas usually come from something I’ve read in a newspaper or magazine, or seen on TV or in a movie—something that sparks my curiosity. I do a lot of research for my stories. The information helps me plot the novel. I couldn’t make it happen any other way.

Why do you think romantic suspense is so wildly popular?

I think it’s the perfect combination to keep a reader reading. Everyone loves romance. Even the most hard-boiled among us are touched by a man and woman finding each other in this difficult world. What are the odds, right? Add action and suspense in equal measure and with any luck, you’ll have a book people won’t be able to put down.  If I can keep them turning the pages, I feel as if I’ve done a good job.

Do you have advice for other writers, especially those trying to create romantic tension and suspense?

Read. Read. Read. If you find an author who captures your attention, read their novels. Read once for story, then read again for technique. Much of what we do is learned. Along with that, it’s important to follow your instincts. If you’re getting bored, so is the reader. Step things up, kill someone, do something!

I would have loved to be involved in the space program. The recent Space X launch was amazing. I hope I’ll be watching when we land on Mars!

Bestselling author Kat Martin, a graduate of the University of California at Santa Barbara, currently resides in Missoula, Montana with Western-author husband, L. J. Martin. More than seventeen million copies of Kat’s books are in print, and she has been published in twenty foreign countries. Fifteen of her recent novels have taken top-ten spots on the New York Times Bestseller List, and her novel Beyond Reason was recently optioned for a feature film. Kat’s next hardcover, THE ULTIMATE BETRAYAL, a romantic thriller, will be released on July 28th.