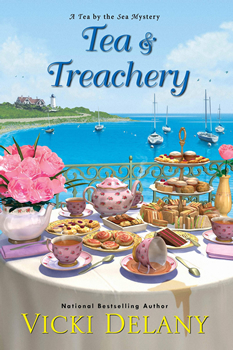 In this charming new cozy mystery series from nationally bestselling author Vicki Delany, a New York City expat-turned-Cape Cod tea shop owner must solve the murder of a local real estate developer to help her feisty grandmother out of a jam . . .

As the proud proprietor and head pastry chef of Tea by the Sea, a traditional English tearoom on the picturesque bluffs of Cape Cod, Roberts has her hands full, often literally. But nothing keeps her busier than steering her sassy grandmother, Rose, away from trouble. Rose operates the grand old Victorian B & B adjacent to Lily’s tea shop . . . for now. An aggressive real estate developer, Jack Ford, is pushing hard to rezone nearby land, with an eye toward building a sprawling golf resort, which would drive Rose and Lily out of business.

Tempers are already steaming, but things really get sticky when Ford is found dead at the foot of Rose’s property and the police think she had something to do with his dramatic demise. Lily can’t let her grandmother get burned by a false murder charge.

The Big Thrill spent some time with award-winning author Vicki Delany discussing the first installment of her new Tea By the Sea mystery series, TEA AND TREACHERY:

Cozy books are meant to be an escape from the world. A nice community with good friends, good food, interrupted by a murder. The murder must be solved, and then the characters can their nice lives back. Perfect for the times we are living in!

Nothing but fun! And some nice recipes. This is a cozy book, so intended to be light and funny. It’s set in a traditional afternoon tea room restaurant on Cape Cod, so hopefully will give people a sense of being on vacation. 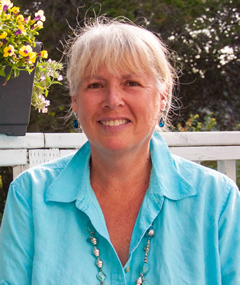 I’ve written more than 35 books and this book is something I know about: baking for afternoon tea. I did learn about different types of tea, though.

I’ve had afternoon tea in places as diverse as the National Portrait Gallery in London and the Prince of Wales Hotel in Niagara-on-the-Lake, and I used what I experienced there in terms of food presentation and serving in writing this book.

For getting into writing cozy books, I’ve read Jenn McKinley and Kate Carlisle and many others to get an understanding of what readers love in the genre.

Why did you switch from writing standalone psychological suspense and police procedural to cozy?

I enjoy the light-heartedness of a good cozy. A cozy novel isn’t trying to solve the problems of the world, just give people a good time. And I decided I like doing that.

Vicki Delany is one of Canada’s most prolific and varied crime writers and a national bestseller in the US. She has written more than thirty-five books: clever cozies to Gothic thrillers to gritty police procedurals, to historical fiction and novellas for adult literacy. She is currently writing four cozy mystery series: the Tea by the Sea mysteries for Kensington, the Sherlock Holmes Bookshop series for Crooked Lane Books, the Year Round Christmas mysteries for Penguin Random House, and the Lighthouse Library series (as Eva Gates) for Crooked Lane.

Vicki is a past president of the Crime Writers of Canada and co-founder and organizer of the Women Killing It Crime Writing Festival. She is the 2019 recipient of the Derrick Murdoch Award for contributions to Canadian crime writing. Vicki lives in Prince Edward County, Ontario.