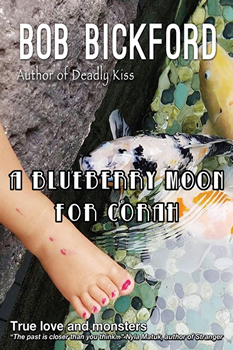 Bob Bickford’s A BLUEBERRY MOON FOR CORAH is an intricate weave of romantic suspense and fantasy that guides the reader through the streets of Hollywood and other rabbit-holes on a wild adventure. He entertains and enlightens with description that is enticing, opulent, and at the same time, seems realistic.

It’s 1963, Hollywood is no longer the maven she once was, but the grandeur of a previous era can still be seen in the shadows, where a wealthy unorthodox family shares the neighborhood with those of moderate means. One backdrop for the novel is in a prominent Hollywood star’s eclectic home where her only child, Corah, is infused with a unique perspective of the world that encourages imagination. A strong-willed, free-spirited child, she soon draws Bink, a neighborhood boy from a more conventional upbringing, into her sphere. Together they explore a fantastical world where anything is possible.

A BLUEBERRY MOON FOR CORAH is so many things—but it is never boring. The initial scene is the suicide of a beautiful up-and-coming actress who is found in the transition neighborhood where Corah and Bink live. It doesn’t take long for the line between reality and fantasy to blur. Is it due to the children’s minds playing tricks on them, or is truth stranger than fiction? Only the reader can decide.

Bickford states on one forum, “…reading for pleasure is intensely personal…solitary and private…” This book will most certainly resonate with every reader on a different and personal level.

Below is an exclusive interview with Bickford for The Big Thrill that could be thought-provoking for all of us.

When you “wandered to Los Angeles,” how long did you stay and what was the most important thing you gleaned from your time there?

I stayed a dozen years—from my late teens until early 30s. I didn’t know anyone when I got there, but it’s my birthplace. It felt like going home, not to somewhere strange. I think in some inexplicable way we all know the place we’re born, and we’re always at home being wherever that is. In some way I can’t account for, Southern California—the streets and ocean and especially the mountains—sits beneath the foundation of whatever I am. Most of my novels are set in Santa Barbara, and this most recent takes place in Hollywood. No matter where I happen to live, L.A. is the place where I dream.

What were your favorite childhood fairy tales and why?

Puff the Magic Dragon comes to mind as one that haunted me early. I think the Peter, Paul, and Mary song qualifies as a fairy tale. The dragon lives by the sea and has a friend called Jackie Paper. “A dragon lives forever, but not so little boys…” The dragon lives on after Jackie grows up, gets old, and dies. He retreats to his cave and mourns an immortality that means he outlives his friends.

It isn’t always thought of as a fairy tale, but Alice’s Adventures in Wonderland also makes my list. I think it’s one of the most important stories ever written, and practically my operating manual for daily life. 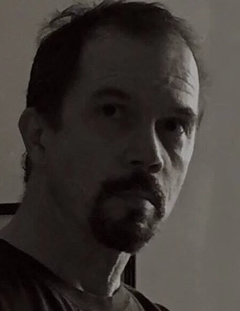 Where do you get the ideas for your novels?

The ideas come from anywhere and everywhere. We all live extraordinary lives. The best stories, the ones closest to the heart, are usually the simplest. I’ve never met anyone who doesn’t have something to tell me about true love and monsters.

I wrote a letter to someone central in my life back in 2012. I suppose we must have been talking about earliest memories, and I scribbled about the year I turned four. I lived in Hollywood, on Loma Linda Avenue, and my recollection of that year covered several pages. I scrapbooked those memories, because I knew there was a story in them. Eventually that letter became A BLUEBERRY MOON FOR CORAH.

Do all of your books have fairy tales incorporated into them? If yes, does the fairy tale inspire the story or do you get ideas from somewhere else first?

A BLUEBERRY MOON FOR CORAH pays open homage to Alice in Wonderland, but mostly I’d rather believe I’m writing new fairy tales than incorporating old ones into my novels.

We think of fairy tales as children’s stories and let our guard down—but they can be essential, deep, and dark. On the way to happily-ever-after, there’s always pain and loss. The elements are far bigger than we think they are. As children, our loves are more intense, the colors are brighter, and the monsters are scarier. When we grow up, “real life” clouds things. I’d like to hope that old age brings back some wisdom and clarity—a return to the vividness of childhood. That’s the central theme of A BLUEBERRY MOON FOR CORAH.

Do you research extensively or have your life experiences provided the plethora of entertaining and enlightening facts woven into your novel?

Both, really. I write a lot about other decades in American life—to date, I’ve mostly visited the late 1940s and the early 1960s. I don’t write dry history. I want stories, and good stories need color—sounds and smells and music. The influential people in my life have mostly passed their eightieth birthdays, and I bug them as much as they’ll tolerate. We are limited to one life, and other people are doorways into the things we’ve missed out on.

Making things vivid does involve endless research and interest. I spend ridiculous amounts of time looking at old photographs and reading restaurant menus from 1940s L.A. You can ask me almost anything about the history of Santa Monica Pier, or train timetables to San Francisco in 1963. Sadly, nobody ever does. Those incidental things never make it into a book, but they get woven into time and place.

What is your most memorable moment as an author?

When I was eleven, I wrote a short story for a school assignment. My mom sat at the kitchen table, checking my homework. She had to do that because I hated school and ducked everything I could get away with. I stood there, waiting for her to finish, and realized she was crying. My story made my mom cry. The power in that moment was overwhelming—I had tripped over something magic.

I still chase that magic, that most important moment. I couldn’t care less about “being an author.” I want to make you laugh and cry, scare you, know you’re falling in love. Mixing colored powders to make bright smoke—magic.

What is your worst fear?

I’m afraid of almost everything. I’m most comfortable being alone, yet terrified of being left behind by myself. Knowing that makes me brave and gives me a map so I don’t get lost.

You’ve written 10 books. What is the key to your success?

Back to my mom, sitting at a long-ago kitchen table. I know that I don’t matter—the stories do. If I’m very, very lucky, when I’ve been gone so long nobody remembers what my voice sounds like, somebody might read A BLUEBERRY MOON FOR CORAH and hear me just a little, telling the story. The imaginations of people I’ll never meet are the only reason I have for doing this. I’m in love with that. The key to my success is knowing that my success is something I’m not meant to see.

When he was little, Bob Bickford haunted the library. He hunted for good stories, got lost in pages, and daydreamed about becoming a writer.

When he got older, real life got in the way and paychecks became more urgent than classes or degrees. The dream was filed under ‘impossible things’ and nearly forgotten. After years spent in various corners of the United States and Canada, he dusted off his imagination and became a writer-by-night. He hunts for good stories once again, and he still haunts the library.