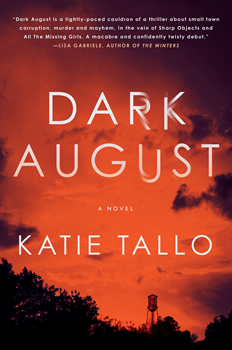 In her debut novel DARK AUGUST, author and screenwriter Katie Tallo delves into the life of August “Gus” Monet, a young woman who’d lost everything when she was eight, and now at 20, is trying to find answers.

Early one morning, Gus’s phone rings—it’s her Great-Grammie Rose’s nurse, telling her she must come home. Rose is dead.

Home is a place Gus hasn’t had since she was eight, and even then, she and her police officer single mother, Shannon, weren’t close. Shannon was preoccupied with an investigation—Gus had always been insanely jealous of the little girl wearing a ballerina outfit in the picture taped to her mother’s office wall. Shannon had even given Gus a puppy to appease her, but she wasn’t interested in a peace offering.

“Most nights that summer ended with Gus screaming that she hated the stupid dog and she wished her mother was dead.” Not long after, her wish came true.

When Shannon died in a car crash, the police took eight-year-old Gus to live with her Great-Grammie Rose, who shipped her off to boarding school when she was 10 with the feeble excuse of giving Gus “a proper young lady’s education.” But Gus didn’t want to be a proper young lady— “she wanted her mother and pizza nights.” She grew up alone at a school of strangers.

Now going back to Rose’s house, she’s greeted by Levi—the dog from her childhood who preferred Rose over her. Although not a dog-lover, Gus is thankful that at least she has him for company.

Gus yearns for a connection to her mother—searching through the house for remnants of her childhood—and finds her old blue trunk. As she looks through her school photos, she finds items from her mother’s collage-wall hidden behind the pictures—her mother reaching out to her after death. The news articles from her investigation are there, including the photo of the little ballerina. Gus feels closer to her mother as she tapes the documents to the wall in Rose’s living room and draws the same red lines her mother had drawn to connect the facts.

“A timeline of events that took place over the span of less than two years, connected by evidence.” This is all she has left of her mother.

When Gus sees a news article about the remains of a body recently uncovered, she realizes it relates to one of the people on the wall of evidence and is compelled to continue her mother’s investigation. It is “a cold case that’s about more than just one person. A case she seemed compelled to keep warm.”

Gus soon realizes that the case may have something to do with her mother’s death. Everything seems to center around the powerful Halladay family, who lived in the town of Elgin, Ontario, which “went up in a fireball” from fracking five years before. As Gus continues to investigate what really happened to her mother and the Halladay family, she finds that not everyone is who they seem, and someone is trying to kill her.

But Gus is determined to uncover the truth.

In this exclusive interview, Tallo chats with The Big Thrill about the empowerment of the poignant Gus Monet, how her dog Levi became a central character, and her debut novel’s message.

What inspired the deeply lonely character of Gus Monet?

I think she comes out of a common experience lived by many of us in that we don’t feel like we fit in or make sense in the world. This is partly why Gus is so clueless with social media; why she retreats into the past; why she hibernates for days at a time—separateness is more natural to her, or maybe safer. The present isn’t a place she’s all that comfortable inhabiting. That feeling of disconnectedness is something I’ve been drawn to before in my writing, and somewhat related is that rite of passage between childhood and adulthood. It’s always fascinated me. It can be an oddly lonely place to find yourself—untethered and sent out into the world as a young adult. But it can also be a powerful turning point in some people’s lives.

When we first meet her, Gus is stuck in that middle place, pulled between her tragic childhood and a looming adulthood where she’s inherited a house and has uprooted herself. As the novel progresses, Gus begins to trust herself, to grow, even if at first that’s just by learning how to love an old dog. She’s a loner, but she longs for connection and a place to call home. I am a bit of a loner myself and friendships haven’t always come easily to me, but my daughter has become my best friend. She’s this lovely, kind, soft-hearted soul who came into my life and changed it profoundly, and I think there are parts of her and me that inspired this character. She’s the reason I write.

What about Gus inspires empowerment for women?

Gus is very young. I think young women can often be dismissed or not taken seriously. I wanted her to be a character who makes mistakes, but who ultimately proves herself capable, strong, and smart—a woman who doesn’t need rescuing. Gus has a fearlessness that I wish I had. It borders on recklessness, but she’s had to rely solely on herself for much of her life, so it’s understandable. She’s been abused by a boyfriend. She sometimes plays up her youthfulness to get what she wants. She survives on junk food. She rarely cries and she loves to drive. She’s complex and imperfect and real. Even when she messes up, her fall-back is always straight-up honesty. Number one in my book is her resilience. She keeps moving forward, keeps asking questions, despite the dangers. I love that she’s so driven and self-reliant. That’s empowering to me.

Tell us more about the role Levi plays in Gus’s life.

Oh, Levi. The lovable old dog in DARK AUGUST is based on my dear departed canine buddy, Levi, who curled up at my feet, happily snoring, while I wrote this novel. My bond with my dog was so strong that he just naturally found his way into the story. He becomes Gus’s trusted companion. He brings a sense of family, hope, and joy into her otherwise lonely life. And besides, every detective needs a sidekick. Levi is Gus’s sidekick. He’s her sounding board, her helper, her driving buddy and a furry connection to her mother. At first, she’s ambivalent, even hostile, toward the old mutt she’s saddled with, but as their relationship grows, Levi turns out to be the protective and comforting presence Gus needs.

What environmental concerns are you expressing in DARK AUGUST?

I can’t say that I set out to write a story about environmental concerns, but the havoc that human beings can wreak on the natural world is at the core of the central villain’s storyline. In the imagined history in DARK AUGUST, the town of Elgin burns to the ground after years of fracking has stressed a huge fault line in the bedrock upon which the town sits. The town’s destruction is triggered by the greedy actions of the wealthy Kep Halladay, who swindled local farmers out of their mineral rights and profited from his misdeeds. The landscape of Eastern Ontario figures prominently in the novel, at times desolate and dangerous.

As Gus drives the highways and back roads of the countryside surrounding Elgin, she meets people who refuse to leave their land because their ties run so deep. She uncovers tragedy, betrayal, and murder, all tied to one man’s disdain for his neighbors and utter disregard for the very land upon which he grew up. Through the character of Kep Halladay, the novel lays bare the often violent and destructive consequences of unchecked greed upon the environment.

Even though DARK AUGUST is sometimes creepy and macabre, at the heart of the novel is love. I hope readers feel that, while they’re on the edge of their seats. Gus’s love for her mother drives the story. Love connects, comforts (aka Levi), and fuels her. Because of love, Gus can finally unravel a long-buried mystery. She learns who her mother really was, and she’s able to forgive her. In doing so, Gus comes to understand herself a little better. At first, Gus uses her love for her mother to escape and to disappear into the past. But slowly, she evolves into a young woman who understands that, even though she died when Gus was very young, her mother is always with her. That’s a way for her to step into the future.

How is writing a novel different from writing a screenplay?

Writing a novel was like a deep dive compared to screenwriting. I could sink into the main character’s mind, flesh out her feelings, the details of the landscapes she was passing through, the house she was inhabiting, the sounds she heard at night. Another difference was the longer page count. It required a different approach to writing and re-writing. It’s tricky because you can forget where you are in such a lengthy piece. The plot changes and shifts, elements are added or taken away, so I had to wrangle my imagination and not get lost by untangling loose threads.

I created an old-school corkboard with cue cards and push pins. I broke the novel down into bits and pieces—plot points, ideas, images, lines of dialogue, dates. In this way, I could organize these pieces into order so I could then move them around and re-order them easily, all while seeing the entire novel at a glance.

But for me, novel writing and screenwriting are also closely related. I write in a structured way that involves three acts, and turning points, a catalyst, and a climax, all elements of a screenplay. Then I work loosely within that structure, allowing for new ideas to bend and shape the story. I also picture the scenes playing out as I’m writing. I see the light, the camera angles, and I say the dialogue aloud, often while gesturing wildly. Even though it’s a novel and not a screenplay, I want the reader to see what I’m seeing, but putting their own unique spin on the lighting, the camera angles, and even adding their own voice while gesturing wildly. That would be cool.

Tell us something about yourself people might not already know.

I can’t whistle or wink or curl my tongue. Genetically impossible. The muscles in my face do not know how to do these weird and wonderful things. I’m also a lefty who throws with her right hand. So, if all these quirks make me a little strange… wait until you read DARK AUGUST.

ITW Awards: Another Look at the Nominees