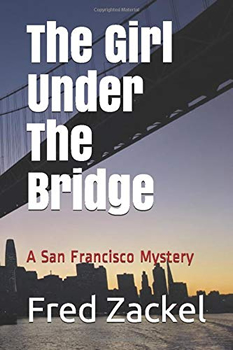 With an advanced payment of $10,000 in cash, Frank Corvo is persuaded to return to the city he was forced to leave. The money is not the only reason, though. His mission is to follow his estranged son and keep him out of trouble until his wedding with Kitty Colosimo, the daughter of a late mobster. Soon after his arrival in San Francisco, he discovers a killer is taking out his son’s friends, family members, and wedding guests.

In this The Big Thrill interview, Fred Zackel takes time out of his schedule to talk to us about his latest release.

How did the idea for THE GIRL UNDER THE BRIDGE come about?

Before I went for my masters and my PhD, I drove cab at night in San Francisco for 20 years. I was a witness to the Gay Revolution. For 10 years this tribe was joyously liberated. Yes, joyously. They were outrageous, silly and catty, bitchy and noisy, and brilliantly witty. And for the first time they were a collective, a tribe having the time of their lives. And out of nowhere the AIDs pandemic snuck in and crushed them. I watched a community almost die. I had written four previous San Francisco novels and never quite got it right, and when I wrote one book with AIDS as a motive, Murder in Waikiki, New York publishers were uninterested. And I couldn’t figure out how to write the nightlife I had witnessed.

For all those years I took notes as I drove and what amazing things I saw and heard. But then my family and I moved east for the PhD. After four drunk drivers nailing me, the PhD was easier. But going back to school in my mid-40s was a different struggle. Just as demanding and just as painful. And I had to let those notes percolate for years into a story.

Many characters in the book are cross-dressers, and the use of personal pronouns changes depending on who’s speaking. Was this a challenge?

Gender in San Francisco was always fluid. People were and still are in transition. Pronouns would often change in mid-sentence. In mid-speech! As long as a writer listens and shows respect for that character’s dignity, clarity for the reader is not a problem.

The city of San Francisco almost becomes a character in itself. How were you influenced by the city?

My first hour in San Francisco I almost ran over Barbra Streisand—Ryan O’Neal pulled her out of my path. On the Sunday night after the Loma Prieta earthquake, I was double-parked and all alone in the center lanes of the upper deck of the damaged San Francisco Bay Bridge. I danced and sang for the glistening skyline until the chilly winds and vertigo said I should leave. The city was the older woman who woke up my life. She could have treated me better, but she never broke my heart. These days she is taking a beating. Gargantuan outsider money. Homelessness. Now a pandemic. She seems to be losing her joy. 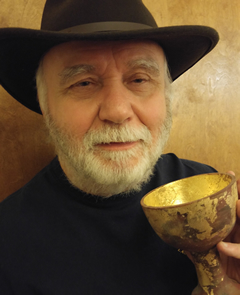 The author picture shows you with the Holy Grail. Where did you get it and what does it mean to you?

Yes, the Grail is a custom-made replica from the Last Crusade. My son gave it to me for my birthday two years ago. I see it as him saying, “You did okay, Pops.” If your family still loves you, you have the Holy Grail.

You see, I was a feral child. Sixty-eight years ago, I pushed aside a summer screen and slipped out a second-story window, grabbing the nape of a pine tree, jumped into space and rode that tree down to the ground under my window, and ran off to have fun. After me, that pine tree was bent at the top like a fisherman’s hook. I have always wandered off. Or drifted away.

Is it a coincidence that Frank Corvo shares the first name with Frank Pasnow from your novel Tough Town Cold City? And was the naming intentional?

Frank Pasnow is a relatively ordinary private eye; in the story he didn’t need to be more to get the job done. On the other hand, Frank Corvo’s last name is the name of the Crow family. Like a crow, he stands back in the shadows and watches. He’s larcenous and likes shiny things. He has the same moral compunctions. Crows, by the way, never forget a face.

Years ago, Elmore Leonard and I shared the same Hollywood agent, H. N. Swanson. Swanie told Leonard, “Don’t use the same characters’ names in more than one book. The studios end up owning those other book rights in perpetuity.” My first novel, Cocaine and Blue Eyes, was made into an NBC movie and they still own Michael Brennen 40 years later. The contract also said NBC could even create novelizations based on that character.

Will you ever write another just like THE GIRL UNDER THE BRIDGE?

Oh, I’m much too old for that. I no longer write for the public. But like a taxidermist, I still putter away at my bench. All my beautiful birds are stuffed and mounted on Kindle.

I have one incredible luxury. Being all alone in this, I can write whatever I want. Artisanal Sex in a Time of Contagion is its title. I have almost 70,000 words done. It’s a “love thriller” that includes a heist, a terrorist attack, and a global conspiracy.

Before Fred Zackel earned his masters and his PhD, he spent 20 years driving cabs at night in San Francisco. This mystery is about the nightlife in the city. Almost everything in the novel is true and comes right from the streets. Zackel just built the frame of a narrative to contain them.