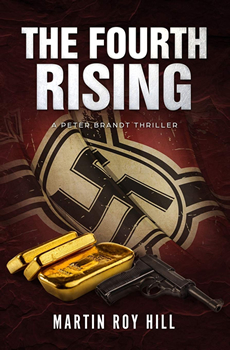 Martin Roy Hill brings us a thriller with a historic bent in his latest book, THE FOURTH RISING.

On May 8, 1945, WWII in Europe ended with Germany’s surrender. But did the Nazi Party itself surrender? Some say no.

1943: A German ship moors in a clandestine anchorage in western Mexico with a cargo of gold intended to bribe the Mexican government into declaring war on the United States. When the attempt fails, the German vessel flees, leaving its gold buried somewhere along the coast of the Sea of Cortés.

1997: The horrific murder of an old flame’s husband sets former war correspondent Peter Brandt on the hunt for the hidden Nazi treasure. The search takes him down a bloody trail leading from the drug cartels of Mexico to a neo-Nazi training camp in the Southern California mountains. Along the way, he unearths a decades-long Nazi conspiracy to create a new Fourth Reich and continue the Nazi Party’s plan for world domination.

The Big Thrill recently checked in with Hill to learn more about this thrilling new tale, THE FOURTH RISING.

The plot for THE FOURTH RISING was inspired by the controversial work of a few researchers who maintain that while Germany surrendered in 1945, the Nazi Party did not. The party leadership scattered to the four winds with a long-term plan to resurrect the party and its plan for world conquest, though now through economic means rather than war. I know that sounds fantastic, but there are actual Allied intelligence documents from the time indicating that was exactly what the Nazis were planning. They had the wealth—stolen from the countries they invaded—and they had business contacts throughout the world with corporations who secretly supported them, including many US companies.

I have always felt that most people today don’t realize how great a threat Nazism/fascism was in the 1930s and 1940s, or how popular it was among the wealthy and even the not so wealthy people in Europe and the United States. Jack-booted Nazis marched down streets and even held a rally at Madison Square Garden in the 1930s. Those are facts. I’ve had a few short stories with this theme published in magazines over the years, but I wanted to write something larger. Watching the rise of fascism and right-wing extremism again across the world was the key motivator for me to sit down and start writing THE FOURTH RISING. I hope the readers come away from reading the book with a greater sense of the threat right-wing extremism poses for democracy.

The thriller genre has long been my favorite type of reading—mystery thrillers, sci-fi thrillers, whatever. Plus, my background in journalism, the military, disaster response, and search-and-rescue [SAR] lends itself to writing thrillers. You know the old saying, “Write about what you know.”

This was the first book I’ve written that I didn’t plot completely through before writing. I was working on a third installment in my Linus Schag, NCIS, series but got bogged down on it. I decided to put that aside and work on THE FOURTH RISING even though I had nothing more than an idea for a plot. I think it works though.

One of the characters in the book is an oversized, long-haired orange tabby named Jack who was inspired by three generations of orange tabbies my wife and I have loved. I dedicated THE FOURTH RISING to those tabbies, whom I call my “Marmalade Mafia.”

The Lost Generation of writers that came out of WWI influenced me earlier on. Writers like Ernest Hemingway, John Dos Passos, and Erich Maria Remarque. I’m a Vietnam-era veteran and their writing on the impact of WWI on their generation seemed to echo what my generation experienced. H. G. Wells also influenced my work. Wells used his books to comment on society’s ills. For instance, The War of the Worlds was a thinly veiled commentary on British imperialism.

In the thriller genre, I’ve been influenced by writers like Alistair MacLean, Jack Higgins, and David Morrell. MacLean got me hooked on first person narratives, which I use in the Peter Brandt books. MacLean and Higgins got me hooked on WWII novels. And I was influenced by the amount of research David Morrell does to give his books authenticity. As a former investigative journalist, I do a lot of research for my books and, because I have all this experience in the military, disaster response, and SAR, I work hard to give my plots a sense of realism that reviewers have repeatedly remarked on.

Why did you switch from journalism to writing fiction?

Because, as Richard Peck said, “Fiction can be truer than fact.”

Martin Roy Hill is the author of the Linus Schag, NCIS, thrillers, the Peter Brandt thrillers, DUTY: Suspense and Mystery Stories from the Cold War and Beyond, EDEN: A Sci-Fi Novella, Polar Melt: A Novel, and WAR STORIES, a nonfiction book on military history. His latest Linus Schag thriller, The Butcher’s Bill, was named the Best Mystery/Suspense Novel of 2017 by the Best Independent Book Awards, and received the Clue Award for Best Suspense Thriller from the Chanticleer International Book Awards and the Silver Medal for Thrillers from Readers Favorite Book Awards, and was the Winner for Adult Fiction in the 2018 California Authors Project. Besides his novels, Martin’s short stories have appeared in such publications as Alfred Hitchcock Mystery Magazine, ALT HIST: The Journal of Historical Fiction and Alternative History, Mystery Weekly Magazine, Crimson Streets, Nebula Rift, Devolution Z, and others.