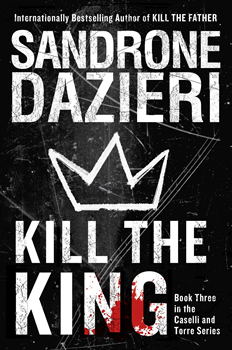 Every time Italian crime writer Sandrone Dazieri sits down to pen a “bloody” scene, he reflects on how much the reader needs to see of it. To put it mildly, Dazieri has done a lot of reflecting in the past few years—his trilogy, culminating this month with KILL THE KING, is a dark exploration of violent crime told through the eyes of two Italian police officers, each with their own shattered pasts.

“Usually, I choose to remove everything that is pure aesthetics,” Dazieri says. “I try to show violence for what it is—brutal, unjust, without the irony that I put on the other pages. I want to make readers understand what Dante Torre and Columba are forced to deal with.”

In KILL THE KING, it turns out to be another bloody mess. Detective Columba Caselli has retreated to the Italian countryside to nurse wounds sustained in the second book—Kill the Angel—and mourn the disappearance of her partner, Dante. But when an autistic teenager stumbles into Columba’s yard covered in blood, she is pulled into an investigation that not only points to a new serial killer on the loose but also helps her to locate her missing partner. And it’s just in time, because as the violence escalates, Columba is implicated in the crimes, and her partner is the only one who can help clear her name.

While the book does pick up where Kill the Angel leaves off, Dazieri peppers in enough non-spoilery backstory that if this is your first crack at the trilogy, it will be enough to entice you back to where Columba and Dante’s story begins with Kill the Father.

“I hope for my readers it will be like watching the third season of a television series: if you like it, then you look at the episodes you missed,” Dazieri says.

Chances are high you will. Though the intricate plot takes the genre’s required twists and turns—some more graphic than others—Dazieri’s powers of description are fully engaged in all aspects of the novel, particularly when it comes to the details of the landscape.

More than a simple journey through the stunning Italian countryside, Dazieri intends to paint a more robust view of the country’s culture while bucking some generational stereotypes associated with his homeland. Or at least, supplement them with some lesser-known characteristics.

“You eat well, it is true, we have a unique artistic heritage and wonderful landscapes. We have a lot of Mafia, and that’s true too,” he says. “But beyond that, my country is the Land of Secrets. Our history is made up of conspiracies, plots, attacks, lies. During the Cold War, our country was at the center of the international chessboard, and secret services from all over the world plotted our territory. In Anglo-Saxon countries you call it Deep State. With us, the state is so ‘deep’ that you cannot see the bottom.”

This is not the first time Dazieri has explored this bottomless well—he’s an acclaimed author of more than a dozen novels and an accomplished screenwriter—but in KILL THE KING, this storyline and its characters find their satisfying end.

“The story that began with Kill the Father has ended,” Dazieri says. “It has been a long journey over a thousand pages and a few years of work. But Dante and Columba may return.”

Just not quite yet.

“I am currently writing a thriller set along the Po River about how ‘The sins of the father laid upon the children…’” he says, keeping any further details under lock and key for the time being.

But Dazieri assures us that writing has continued, pandemic and all. In fact, the time he’s saved while not traveling from his countryside home to the city for business or to visit loved ones has been spent working on his novels—and discovering new passions.

“I invested in studying the drums, which is my senile passion, and teaching the rudiments of writing to people who were confined in their house like me,” he says. “In the general disaster, it has been a beautiful experience.”