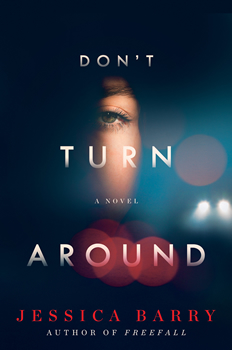 When she was three years old, Jessica Barry dictated her first story to her mom. She thinks it involved a bumblebee and a queen—the details beyond that are a bit fuzzy.

In what Kirkus calls the “gritty lovechild of Thelma and Louise and Spielberg’s Duel,” Barry introduces us to two very different women who embark on a controversial—and ultimately dangerous—road trip from Lubbock, Texas, to an abortion clinic in Albuquerque, New Mexico.

When Cait, an aspiring journalist who moonlights as a driver for charity organization Sisters of Service, picks up Rebecca from her ritzy home in a well-off Lubbock neighborhood, she assumes it will be a routine trip. Sure, a few weird things have happened before, but she and her well-traveled Jeep have made the journey along that stretch of road dozens of times—it will be fine.

Everything is not fine—and Barry will have you questioning whether it ever will be again.

Barry says the idea was sparked in part by a road rage incident she witnessed not long after returning to the US after living abroad the past few years. 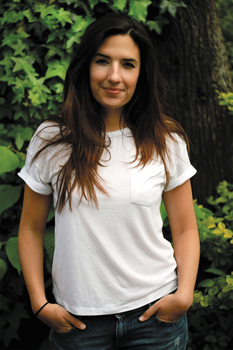 “I had this ridiculous thing happen where this guy thought I had cut him off,” she says. “And he went completely insane. He tailgated my car, and followed me for several blocks.”

Barry’s husband—who was not visible to the driver of the other vehicle—suggested she turn into a crowded parking lot, hoping he and his rage would just go away. They didn’t.

“He came into the parking lot and started circling the car,” she says. “My husband and I decided to just get out of the car—what else could we do? Simon isn’t a big guy, but when the driver saw him, he drove away.”

Understandably shaken, Barry started thinking about what might have happened had she been alone in the car. Those thoughts then turned to other driving fears—such as being on a deserted stretch of highway, in the dark, where even the sight of oncoming headlights is enough to ratchet up your anxiety.

The fear is palpable in DON’T TURN AROUND, partly due to Barry’s skill—the atmospheric setting is brilliantly crafted—but also to the detail in which Barry describes this particular stretch of road. There’s not much on it, and that’s the point. 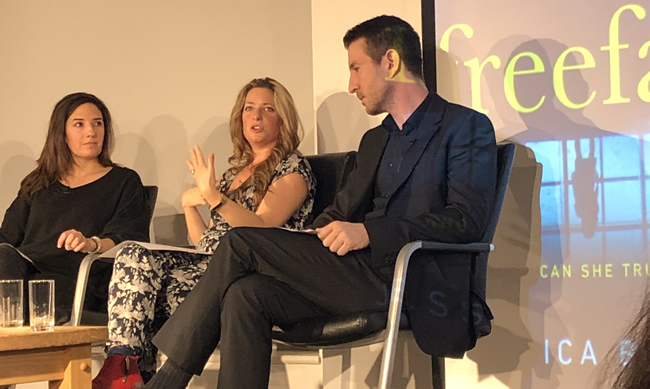 Barry hasn’t traveled that highway, but “Thank God Google did that thing with the yellow man on the map…If you knew how much time I’ve spent inching that little yellow man along that road. You see the billboards, and how big those spaces are. It’s so flat and open. I could imagine someone being hunted there…there’s no place to turn.”

That’s certainly the case for Cait and Rebecca, who seem like fairly benign women—until you learn more about their backstories, which Barry delivers through flashback chapters that soon make it all too clear why this won’t be the road trip either of them envisioned.

It’s against this tense backdrop that Barry also weaves in commentary about some important societal issues—online bullying, cancel culture, abortion. 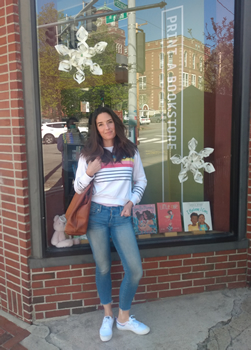 Barry in front of Print, an indie bookseller in Portland, Maine.

“I don’t feel like I necessarily set out to write a book that was trying to tackle these bigger issues, but I think that in order to create natural characters, I had to take a look at my own experiences,” she says. “I learned at an early age to hold my keys between my fingers when walking alone at night. To constantly be alert and aware of any potential dangers. Doxing, online trolling, that weird guy that lives next door or the customer that comes in too often—as a woman, you have to be suspicious of all those things.”

If you weren’t before, you will be now.

While Barry didn’t start out writing thrillers—she wrote three rom-coms under her real name, Melissa Pimental—it’s clear she has found her lane. Freefall has been optioned and a script has been written, but Barry understands Hollywood progression is a slow burn, even without a pandemic making it even slower.

While she waits, she’s at work on a new thriller set in the world of wellness. That’s about all she can say about it now—which means it’s up to her readers to do the waiting. After diving into DON’T TURN AROUND, of course.