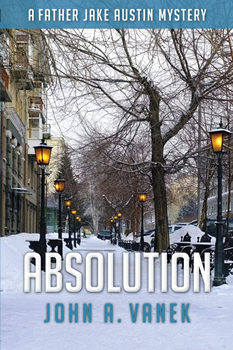 This time around, Father Jake must decide whether to turn his back on his biological father, the man who deserted him as a child, or turn the other cheek and save him from a vengeful drug lord, risking his own life and the lives of those he loves.

The Big Thrill recently caught up with Vanek to learn more about this ongoing series.

Tell us about your main character, Father Jake Austin. What has his journey been like up until now?

I worked as a physician in a Catholic hospital for many years, and Father Jake is loosely modeled after two priests who were personal friends. As I wrote and revised the three books in the series (and the fourth manuscript on my desk), the shortcomings and strengths that I bestowed on Jake have caused him to blossom into a very distinct character. He is a 21st century Father Brown but unlike Brown, Jake is a reluctant hero. He had a troubled youth and is dogged by guilt and self-doubts. Jake is more human than saintly, and he sometimes fumbles his way through life, which influences his responses and actions in surprising ways. I’m blessed to have a very loyal readership that has become quite invested in the three main characters in my mysteries: Father Jake, Emily (his ex-girlfriend from high school), and Tremont Macon (his best friend and the police chief).

As you wrote the book, did you discover anything new?

After the first two books in the Father Jake series, it’s clear that readers love that Father Jake is not saintly, and that he fumbles his way through life as many of us do. They are also highly invested in his relationship with Emily, with half of my readers hoping they’ll marry, and half demanding that he remain true to his vows as a priest. Readers also enjoy the behind-the-scenes look at both medicine and religion, commenting that they learn something new or reexamine their own spirituality with each story.

Father Jake Austin is a fictional character, but aspects of his personality and struggles are modeled after two Catholic priests who became my close friends and confidants. When I first met them, I expected the usual stereotypes, but when their Roman collars came off, I found that they were simply human. One priest confessed his attraction to a young nun. Call his love unrequited; he called it hell. I watched this righteous man struggle with his commitment to his vows, which became the inspiration for Jake and Emily’s relationship in my novels. Seeing these men wrestle with the same emotions that we all share shattered my preconceived notions. I portray Father Jake as a spiritual man, but as realistically as possible.

What first drew you to writing crime fiction and mystery?

Not what but who—the many fine writers who not only spin a good yarn but also handle prose as deftly as a neurosurgeon wields a scalpel. The list is long. Michael Connelly, Dennis Lehane, Pat Conroy, Laura Lippman, Les Standiford, Jonathan and Faye Kellerman, Sterling Watson, Julia Spencer-Fleming, and Michael Koryta, to mention a few. Several have personally guided me on my writing journey, and I’m grateful to them.

Dynamic, believable characters are as important as an engaging plot. If I can’t become invested in a book’s characters in the first 50 pages, I stop reading. Life is too short. Great mystery writers also leave a bread-crumb trail of clues that allow the reader to become an amateur sleuth, and therein lies the joy. Twists and turns in the plot are fun but for me, the clues must lead to a logical, satisfying conclusion.

What are the benefits and drawbacks of working on a series?

Working on a series allows me to intimately know my characters. The way they each respond to a given challenge sometimes surprises even me, which is enjoyable as a writer. In the case of Deros (the first book in the series), the ending determined major plot elements in Miracles (book two), which in turn logically led to the plot in ABSOLUTION (book three).

Each book in the Father Jake series is intended to stand alone. The most difficult aspect for me is providing enough backstory in each subsequent book to satisfy someone who reads the series out of order, without boring those who have read the series in the normal sequence.

John Vanek received his M.D. from the University of Rochester and practiced medicine in Ohio for a quarter century, but his interest in writing never waned. Medicine was his life, but mysteries became his drug of choice. He began honing his craft in creative writing workshops and college courses and was gratified when his work won contests and was published widely. John now lives happily as an ink-stained-wretch in Florida. He is an active member of the International Thriller Writers. He teaches a poetry workshop for seniors at a local college, and enjoys swimming, hiking, sunshine, good friends, and red wine.