A Continuous Battering of the Soul 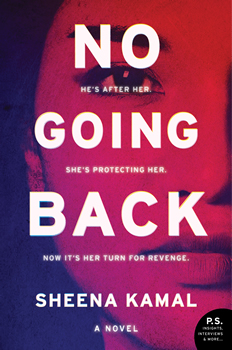 Nora Watts is not only damaged, but dangerous. She’s been beaten up so many times, both physically and emotionally, that she’s almost oblivious to further harm. Almost.

In NO GOING BACK, author Sheena Kamal spins a tale of a lost soul who will risk everything to protect the daughter she never thought she wanted.

A mix of Palestinian and indigenous Canadian, Nora is part of “two bloodlines where basic human dignity has been historically denied.” Life has not been good to her. Now a recovering alcoholic, she “lives in darkness,” and “suffers from a continuous battering of her soul.”

Seventeen years ago, Nora gave up her baby for adoption, but reentered her daughter’s life after Bonnie’s powerful biological father kidnapped and almost killed her. Nora rescued her but made a powerful enemy in the process: David Tao, known simply as Dao, the head of the biological father’s security team.

Now, the ruthless killer Dao wants revenge, his hatred of Nora so powerful that he will kill anyone who gets in his way.

Nora knows her preservation instinct has been worn down, but she also knows she must risk her life to protect her daughter. With Dao using Bonnie as bait to trap Nora, she has no choice but to fight back. She knows no one close to her is safe, especially those she loves. As bodies pile up, Nora insists on taking Dao out alone before he hurts anyone else. Will she be able to save her daughter and herself?

In Nora Watts, Kamal has created a deeply flawed character filled with a sense of isolation and loss. We feel Nora’s pain as we trudge with her through the cold Vancouver streets and the story that is her life. But we also admire the grit and determination that defines her.

Kamal talks to The Big Thrill about how Nora Watts came to be and how her personal circumstances have shaped the stories she tells.

What inspired you to make Nora Watts such a damaged character?

I think she just came to me that way. I didn’t create a backstory before sitting down to write The Lost Ones, which is the first book in the series. I started with a concept and allowed the character to reveal herself to me in the process… Wow. That sounds precious, but it’s the truth. Every devastating revelation was a surprise to me, too, but it all seemed to fit her. Her journey is a fraught one, and I had to create someone who was complex enough to suit it. It was very instinctive.

How has your feeling of “being an outsider wherever you are” filtered into Nora’s character?

Well, they say write what you know… I suppose that’s just a feeling that I’m familiar with, even when it’s self-inflicted. For Nora, what I gave her from this is a distrust of people that borders on the extreme. She’s incredibly hardheaded, self-reliant, and doesn’t ask for help because she is sure people will say no. This fear of being misunderstood, being rejected, is a huge part of her character and is something she constantly comes up against in the series.

You write about what is unseen and women who are invisible. What have you learned from this?

I can tell you that it breaks my heart. There is such melancholy, such rage, in writing about women who society doesn’t pay attention to. When I started writing Nora, I wanted to look at race, gender, and class in Canada. The books focus on gender violence, so for me it had to have an intersectional approach. With Nora, there are systemic reasons why women like her are overlooked, and this informs her character and is explored in the book. She is not seen, but this frees her to observe people closely and gives her that unique ability of hers—to tell when someone is lying.

You’ve written about how your uncle’s suicide shaped your formative years. Has this aspect of your life filtered into your writing, especially your characters?

It is absolutely something that comes through in my writing. My next book project (still in the first-draft stage) focuses almost exclusively on this subject. I think for the Nora series and my YA Fight Like a Girl, it exists in my obsession with how traumatic events have ripple effects that you can never anticipate, lingering through generations.

Does NO GOING BACK have a message for readers?

Enjoy me? Maybe tell your friends about me? (If you are so inclined.)

How has acting and political activism shaped your writing?

I miss acting so much! Even just training. It pushes me to mine the emotional depths of a character and a scene, I think. As for my university background in politics and my days as a youth activist, what I learned at that time filters through my work. Social and environmental issues pop up in my books all the time. Though I try not to be too heavy-handed with them in the books, I definitely obsess over them in the research.

You wrote an article for Writer’s Digest about your experience at the ThrillerFest conference (with the condescending guy at the bar). What advice do you have for other writers, especially those just starting their career?

Trust your instincts and back yourself one hundred percent. You’re the only one who will. Also, never assume that strange men at bars have your best interests at heart. But that’s just a general piece of advice.

Well, I overshare tons in person and during interviews so it’s possible they already know all the juicy stuff… Hmm. I can do the splits all three ways. They might not know that yet.