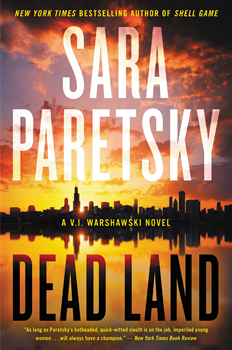 Almost 30 years have passed since Sara Paretsky’s V. I. Warshawski burst onto the literary scene, quickly establishing herself as one of the most empowering and influential female protagonists of all time.

Paretsky has been vocal about her initial goal with Warshawski—in her memoir Writing in an Age of Silence, she notes that she wanted “to create a female character who is a person, not an angel or a monster”—but when asked why she thinks so many authors and readers continue to relate to her, Paretsky’s voice cracks a little.

“I can’t really answer that,” she says quietly. “I am tremendously moved that she has that effect on people, but I sometimes feel like the Grandma Moses of writing. I never did an MFA. I never studied literature. Characters have to speak in an authentic voice, and it may be that my grappling to find that authenticity is what resonates with readers.”

More likely, it’s that Warshawski possesses a courageous and almost fearless attitude that many women wish they could embody—including the author. While the two do share similar traits—a passion for social justice, an appreciation for good whiskey, and a pension for clutter—Warshawski is reckless, bold, and far more of a risk taker.

“If I were the kind of person V. I. is, I wouldn’t be writing the books, I’d be out doing those things,” Paretsky says.

Thankfully, the books continue to come, the latest—number 20 in the series—being DEAD LAND, a story in which Chicago’s most notorious and beloved PI plunges into an investigation surrounding clandestine land deals in which public gardens and green spaces are being handed over to private enterprises for profit.

As with most of Paretsky’s stories, the root of the novel stems from something she’s seeing happen not only in Chicago but across the world—with increased frequency. But this is also a relationship story, and to get those dynamics right, Paretsky looked no further than a dog park in her area of the city.

“There’s a guy in the neighborhood who fascinates me, he’s like a dog whisperer,” she says. “He’s someone who knows every homeless person in my neighborhood. He’s not a gentle soul—gentle with those who are fragile, yes, but not with other people…”

This stranger—a man Paretsky says she only knows from their brief encounters at the dog park—inspired one of DEAD LAND’s central characters. Paretsky is less clear about the genesis of some of the other players, but she admits part of the story is also her passive-aggressive response to Chicago’s historic—and tragic—role in destabilizing the Chilean economy.

“I live near the University of Chicago, and they’ve produced a lot of economic laureates,” she says. “Every time I go by the economics building, I see that sign asking if anyone wants to see what a Nobel Prize looks like, and I think back to those 50,000 murdered and tortured people…” [Ed. note: In the 1970s, a group of Chilean exchange students studied at the University of Chicago under Nobel Memorial Prize-winning economist Milton Friedman. Upon their return to Chile, the young economists, known as “the Chicago Boys,” rose to prominence under the reign of brutal dictator Augusto Pinochet. Their policies seemed to halt the country’s economic downturn at the time, only to lay the groundwork for the devastating economic inequality that would follow.]

It fires Paretsky up—but of course, that’s part of why she writes. “If I’m not feeling this chip on my shoulder, I don’t think I could write with such conviction.”

This conviction also factors into pacing. Not the story itself, but rather the speed at which she produces. Paretsky admits that while she thinks fast, she writes slow, taking time to get the story right, even if it means scrapping up to 100 pages and starting over. Repeatedly. DEAD LAND, for example, was re-started six times before she felt the plot was unraveling in the right way.

If that sounds counterproductive, Paretsky won’t argue—but she also doesn’t want to entertain a debate about the pros and cons of plotting versus, um, that other “p” word she disdains. Rather than “fly by the seat of her pants,” Paretsky likens the writing process to either playing chess—which requires methodical outlining—or engaging in a fast-paced game of tennis. She has a general sense of how the story will go, but can’t really know what happens next—or how her characters will respond—until the ball is lobbed their way.

This is a process that works for her—and as someone who doesn’t hit the traditional “book a year” milestone, she can’t afford to veer too far off her meticulously charted path. That includes her approach to research.

It makes sense that Warshawski lives and operates in Chicago—this is also Paretsky’s home, of course—but when forced to take her PI outside of these familiar boundaries, Paretsky’s attention to detail can become somewhat of a barrier.

“I had an idea years ago about a public societal issue around asbestos,” she says. “I worked in insurance, and I wanted to do a story set in the London market around this insurance claim I’d read about. But the more I thought about it, the more I realized that there was so much I didn’t know about England. And it seemed to me that I would have to know a lot more if I was going to write about it authentically.”

Authenticity matters to Paretsky. It’s what drove her to create Warshawsi in the first place, a character that remains one of the most accurately female PIs in the fiction business, even as she continues to evolve.

“When I started writing, I just wanted to prove I could write a novel from beginning to end,” Paretsky says. “And then, I had this mission to turn the stereotypes around female characters on their heads. Now V. I. feels fully realized in my mind, and one of the challenges in being so familiar with the character is that how I think and act and how she thinks and acts gets broken down enough that she doesn’t become a reflection of my psyche. I always get there, but—and I think this is true for all writers—starting each new book feels like an act of terror.”

One that is unavoidable, however, considering that Paretsky is far from done with Warshawski. She just isn’t sure how any book will take shape while the impact of COVID-19 is still so fresh, not only globally, but in her mind.

“Now, on top of the usual fears and insecurities I have about writing, we are in what is going to be a very prolonged quarantine, and economic fallout,” she says. “It’s going to be hard to know how to tell a story. Right before the coronavirus, I had started work on a new book set against the backdrop of our abomination of a health care program. But to write about that while this is all happening—it makes me feel a little uncertain….”

That uncertainty is something Paretsky says she’ll continue to ponder over a good cappuccino—or two—while also learning about all of the new ways to promote DEAD LAND online.

No problem. This is simply more uncharted territory Paretsky will undoubtedly conquer.

May 4 - 10: How do you select and research exotic locations?