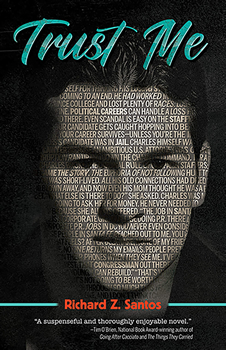 TRUST ME, author Richard Santos’s debut novel, could have been, as they say on TV, ripped from today’s headlines.

The story follows Charles O’Connell and Gabriel Luna. A disgraced political campaign staffer, Charles is eager to leave Washington, DC after his last job dissolved amidst legal trouble. He’s desperate for a fresh start when he receives an unexpected offer to do public relations for an airport development in Santa Fe. Almost as soon as he lands, a skeleton is found on-site, and the local Apache Tribe claims it is none other than the body of Geronimo.

One of the laborers who uncovered the remains, Gabriel Luna, falls ill—his mushroom dealer says it’s cancer—and he’s desperate to regain his son’s respect before it’s too late. Meanwhile, Cody Branch, a crass Texas developer, plans to leverage the deal to enrich himself. His wife, Olivia, is hiding a connection to Charles’s past. And his fixer, Mallon, is on the brink of discovering Olivia’s plot. With the ground shifting under his feet, Charles realizes that everyone has an agenda, and numerous dark secrets threaten to erupt.

Bestselling author Tim O’Brien called TRUST ME “a suspenseful and thoroughly enjoyable novel that explores the themes of betrayal, deceit, redemption, and cultural collision in modern-day New Mexico. Santos draws on his own political background to create a web of manipulation and intrigue that ensnares his characters in a world in which trust itself becomes dangerously suspect. Even the New Mexico landscape, which Santos carefully paints, seems to hold its eerie and misleading secrets.”

The Big Thrill asked Santos about how the extent current events in the US play in TRUST ME and how capitalism affects less capitalistic cultures in America.

I used to work in politics and frequently flew from Washington, DC to Santa Fe for a campaign job, so to a certain extent this book emerges from my time in politics. The job I had wasn’t as exciting (or corrupt) as Charles’s, but politics runs through the book for sure. I wanted to explore the kind of person I saw in DC and on campaigns. There aren’t a lot of truly happy, well-balanced, and healthy older politicos. Something about the intensity of the job burns you out in a really interesting way. The goal was to combine that perspective with a story that touched on centuries of colonization and exploitation in New Mexico.

The past four hundred years in New Mexico is a story of people showing up from elsewhere and taking land from the people there before: the Spanish, Anglo settlers, the US Government, cattle companies, oil companies, and so on. So many long-time residents of New Mexico feel a deep attachment to the land itself, even though their place on that land has been constantly shifting.

One of the more interesting relationships in the book is the strained one between Gabriel and his son. Someone once told me that if it weren’t for the relationship between guys and their fathers, all fiction would be written by women. What is your opinion?

That’s an interesting thought. I’m not sure I believe it or even fully understand it, but it definitely gets me thinking. I will say that my father was a writer. He wrote history books and only dabbled in fiction. Seeing him write when I was a little kid is definitely one of my earliest memories. For this book, though, I associate New Mexico with my mother’s family. That side of the family has been in New Mexico for centuries, so not only is the place full of bones and ancestors, but I can’t take a step in that state without thinking of her.

An art teacher once gave artist Olivia Branch the advice to “move with intent.” What does that advice mean to you as a writer, and specifically a writer of crime fiction?

I would say that when it comes to writing, you have to make sure the scenes actually matter, and they all move the plot forward. This sounds obvious, but I think most of us must learn this the hard way. I went through so many drafts of this book and so many complete rewrites. Each time I thought I was done, I realized that too many scenes were just passive gatherings of characters. Sometimes they provided good exposition, other times they rounded out character details, but none of that matters if nothing happens. I knew I wasn’t writing the kind of book where someone kicks down a door with a gun every ten pages, but I needed so much more intent in the earlier drafts.

What authors, alive or dead, would you choose to be on your dream panel at ThrillerFest, and what would the topic be?

Ah, tough one! I just taught a class for The Writers’ League of Texas called “Beyond ‘Write What You Know,’” and I’ve been thinking a lot about authors who write from their own experiences without getting autobiographical. The first two names that come to mind are Robert Stone and Louise Erdrich. I know neither call themselves thriller writers, but their work always has a current of violence running through the pages. Also, their own experiences and cultures are huge influences on their books without taking over the narrative. Too many beginning writers think their novels are their chance to tell us how exciting their lives have been. I’d want Robert and Louise to teach us how to get out of our own way.

Richard Z. Santos received an MFA from Texas State University. He is a board member of The National Book Critics Circle, and his fiction, essays, and reviews have appeared in multiple publications, including The San Antonio Express-News, Kirkus Reviews, The Rumpus, The Morning News and The Texas Observer. Previously, he was a political campaign operative. A high school English teacher in Austin, Texas, this is his first novel.