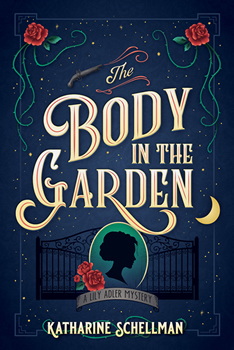 Author Katherine Schellman brings us a mystery in a historical setting in her latest book, THE BODY IN THE GARDEN.

It’s 1815, and newly-widowed Lily Adler is no stranger to the glittering world of London’s upper crust. At a ball thrown by her oldest friend, Lady Walter, she expects the scandal, gossip, and secrets. What she doesn’t expect is the dead body in Lady Walter’s garden—or that Lord Walter would bribe the investigating magistrate to drop the case.

Aided by a roguish navy captain and a mysterious heiress from the West Indies, Lily sets out to discover whether her friend’s husband is mixed up in blackmail and murder. But the dead man knew secrets that someone powerful is killing to keep hidden. Now, Lily will have to uncover the truth, before she becomes the murderer’s next target.

The Big Thill recently checked in with the author to learn more about this thrilling new tale.

For me, characters almost always come first. My main character Lily, a young widow in Regency England trying to start over in life, had been in my mind for a while. She was eventually joined by Ofelia Oswald, an heiress from the West Indies, who was inspired by Miss Lambe in Jane Austen’s unfinished novel Sanditon.

I originally thought Lily’s story was going to be a romance. But what brought these two women together turned out to be a dead body and a lot of secrets. And the murder mystery plot took shape from there!

I grew up watching PBS and Masterpiece Theatre mysteries with my parents. When I started reading the detective stories and thrillers many of them were based on, I was hooked.

This genre is so much fun. As a reader, you get the challenge of trying to figure out the mystery before the main character does. As a writer, the high stakes give you the chance to explore fascinating questions about your characters and their relationships. And of course, the stories are fast-paced and exciting—the best of all possible worlds!

Researching the historical setting meant that I was constantly discovering weird new facts that I wanted to include or have influence the mystery. Things like “wife selling,” which wasn’t legal, but enough people in small villages thought it was that it happened (and was actually a pretty good way for a poor woman to get out of a bad marriage!). A few of them made it in, but the rest will have to wait for another Lily Adler Mystery.

Katharine Schellman studied theatre and history at the College of William & Mary, after which she went on to dance professionally, marry her college sweetheart, and collect addresses up and down the East Coast of the United States. THE BODY IN THE GARDEN is her debut novel, though she has previously published a variety of short fiction and essays. Katharine currently lives and writes in the mountains of Virginia with her husband, son, and a collection of houseplants that she keeps accidentally killing.