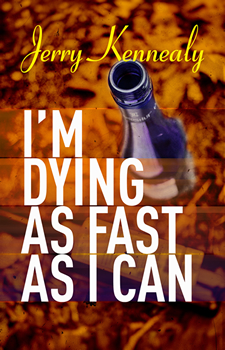 Many writers have made careers creating characters and situations around big-city law enforcement—several based in the San Francisco area. But rarely has a former San Francisco cop and private investigator, a guy like Jerry Kennealy, taken to writing mysteries. The result is a series of novels rich with real-life authenticity and experience.

The Big Thrill talked with Kennealy about his 26th novel, I’M DYING AS FAST AS I CAN, which takes readers inside the world of assisted suicide. Kennealy explains that the idea for the book came from a fan who approached him in the library.

You were both a policeman and a private investigator in San Francisco. How did those experiences inform your novels? Were there “truth is stranger than fiction” situations to work through?

Having been a policeman made working as a private eye much easier. The PI job took me to some interesting places, including San Quentin and Soledad prisons. I never knew where the next case would send me—to meetings with attorneys, judges, bankers, bookies, hookers, a Pacific Heights mansion, an S&M bar, The Fairmont Hotel, or a Tenderloin rooming house.

Many of the characters I bumped into along the way made it into my books, including some rough encounters, word for word.

I’M DYING AS FAST AS I CAN seems to look inward at death against the backdrop of a thriller. What made this the right time for you to explore this topic?

Assisted suicide seems to be one of those topics that people respond to with a hard, fast “Yes” or “No.” I was in the local library and a man came up to me and said he recognized me from book covers, and that he had a great idea for a book. These situations don’t usually work out well. This time it did. He had lost a dear friend to cancer, a long painful death, and now he and another buddy had a “suicide pact.” If either one got seriously ill, the other would take him out in the manner described in I’M DYING AS FAST AS I CAN:  booze, music, a plastic bag, and helium. “Painless,” the man claimed.

Your research involved talking with the terminally ill. How did that impact you as an author?

I was amazed at how calm and matter-of-factly most of the patients reacted to their illnesses. They certainly weren’t happy about it, but they handled it with grace and dignity. And God bless the caregivers!

Tell us about Nick Polo. What do you like about him? What keeps him human? What surprised you as you further developed him across a series of novels?

I like the Nick Polo character because he isn’t really hardboiled, he’s more al dente. The reasons someone hires a private investigator vary—looking for a lost love one, the need for protection, assistance in civil or criminal defense cases—but basically, it’s because they need help. That’s one of the best parts of the job, helping people in real need. Polo does it well.

You mention that you hope readers will get a look at both sides of the “right to die” argument. Did you want to challenge readers to come to their own conclusions?

I just hope readers will take an objective view. There is a real concern about a slippery slope: “Uncle Harry’s picked up a horrible cough. We should pull the plug.” Then there’s the sight of seeing a loved one in horrible pain, but the doctors restrict the pain medicine.

The San Francisco area comes with a lot of notoriety and a distinct personality. Does the city itself play a significant role in your novels?

Ah, San Francisco. I’m a native son, “born and raised” as the great Herb Caen liked to say. All of my books take place in San Francisco and the neighboring counties. The cop and PI jobs took me everywhere. I like to introduce neighborhoods, places, and restaurants that the reader might not find in other books.

Is there a new novel on the horizon for your fans?

I’m currently working on a thriller that takes place during the 1976 police-fire strike.  Really interesting. If you were going to get rid of someone, what better time than when the cops are on strike?

If it weren’t for my beautiful wife, Shirley, none of my books would have made it to print. She’s my in-house editor and is detail-oriented. I’ll have characters changing their cars, their addresses. Recently she told me, “Jer, the guy Polo is talking to in Chapter 12 died in Chapter 2.”

I love being a mystery writer, but things are changing so rapidly. I was on a panel at a Bouchercon conference years back and said that at the rate things are going, we’ll all be writing science fiction soon. Are we there yet—with DNA results, facial recognition, drones, computer access to just about anything, CSI magic?

I remember an old Philip Marlowe story, where he picked up a gun and wiped the fingerprints off with his handkerchief.  Today they’d pick up mucus particles from the handkerchief, and he’d be in jail.

Jerry Kennealy has worked as a San Francisco policeman and as a licensed private investigator in the City by the Bay. He has written twenty-two novels, including a series on private eye Nick Polo, two of which were nominated for a Shamus Award. His books have been published in England, France, Germany, Japan, Italy, and Spain. He is a member of Mystery Writers of America and Private Eye Writers of America.

He was the recipient of the 2017 Life Achievement Award by the Private Eye Writers of America.

Jerry lives in San Bruno, California, with his wife and in-house editor, Shirley.