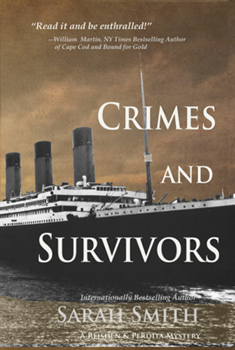 It’s 1912. America is the land of Jim Crow, and a young society woman, who always thought she was white, discovers that the grandfather she barely knows may be passing. She can’t subject her little boy to that, or her mother and sisters and brothers.

She follows her grandfather onto the newest, safest, biggest ship in the world to learn the truth—the right truth, the one that will save her family. But after the iceberg, she finds the truth is more complicated than black and white, more daring, more loving, and far more dangerous. And what she’ll have to find is not a convenient truth, but a new America.

Award-winning novelist Sarah Smith stopped by for a quick chat with The Big Thrill about her latest mystery, the fourth installment in the Reisden and Perdita Mystery series, CRIMES AND SURVIVORS:

The book’s about survival against prejudice, telling your own story instead of having it told for you. Most of the people in the book are survivors, some literally survivors of the Titanic. I’m hoping a few readers decide “I’m not alone. I can stand up for myself like these people did.”

Writing from the points of view of #othervoices–both challenge and opportunity. I have mixed-race relatives but I’m white. I read a lot, researched a lot, learned a lot, had fun. And I hope I was faithful to the characters.

But I feel guilty about any success it gets that should go to a writer of color.

The book is set in 1912 and stars a white woman who discovers her grandfather may be black. Huge surprise to her (and to me, too). She goes aboard the Titanic to confront him and learn the truth.

I discovered that the White Star Line forbade ALL black people from traveling on the Titanic.

Any black writer would have known this instantly.

Part of that prejudice is that they’re invisible.

James Weldon Johnson, for the great American tragic novel The Autobiography of an Ex-Colored Man; read that book! Barbara Neely. When I discovered I’d have to write POC characters from their POV, and was panicking, she said “You can research. You can learn.” She doesn’t remember this; she saved my life.

But I learn from authors and books every day; thanks, guys.

Why on earth did you do something so political?

My family’s multicultural; my neighborhood, my city, our world are multicultural. Ignoring that is political.

So I do whatever the little voices tell me to do, and they told me to write the scary book.

Sarah Smith’s mysteries and novels have been published in 14 languages and have become bestsellers here and abroad. They’ve been named New York Times Notable Books twice and won the Agatha Award and the Massachusetts Book Award. They’ve got starred Kirkus and PW reviews, been named an Entertainment Weekly Editor’s Choice, and collected many other recommendations and awards. She is a graduate of Harvard and a member of a multicultural family living near Boston.