Few authors have impacted the publishing industry, let alone the genre of suspense fiction, to the extent of Mary Higgins Clark.

Born in 1927, Higgins Clark was only 16 years old when she started pitching short stories to confession magazines. For years, her reward was an ever-growing collection of rejection letters; she was a mother of three by the time she sold her first story, “Stowaway,” to Extension magazine in 1956. Even then, success was nearly 20 years away. She was 41 years old when her debut novel, Aspire to the Heavens, was published in 1968.

That release, a historical novel about the relationship between George and Martha Washington, failed to make much of an impression. But Higgins Clark—by then a widow who was struggling to put two of her children through college—gave it another go several years later, this time with a suspense novel called Where Are the Children? Inspired by the case of Alice Crimmins, a New York woman accused of murdering her young son and daughter, the 1975 novel originally netted Higgins Clark a modest advance of $3,000; several months later, though, the book’s paperback rights sold for six figures, and a suspense icon was born.

Higgins Clark has been a staple on the bestseller list ever since. In 1988, she became the first writer to sign an eight-figure publishing deal when Simon & Schuster secured the rights to four of her upcoming novels. (Higgins Clark’s agent at the time, Eugene Winick, considered the author’s $10.1 million payday a compromise, insisting they could’ve asked for more but deciding to “settle” due to Higgins Clark’s close relationships with her longtime editor, Michael Korda, and the publishing house’s chairman, Richard Snyder.)

By the time of her death on January 31st of this year at the age of 92, Higgins Clark had authored an astonishing 56 bestsellers, earning her the undisputed title “The Queen of Suspense.” We couldn’t think of a better way to pay tribute to the late icon than to gather a panel of three writers whose lives and work are inextricably tied to her legacy: New York Times bestselling author Alafair Burke, who was Higgins Clark’s co-writer on the Under Suspicion series; Edgar, Anthony, and Agatha Award-winner Laura Lippman, whose love for crime fiction was sparked, in large part, by Where Are the Children?; and Arthur Ellis Award-winning journalist, author, and anthologist Sarah Weinman, whose advocacy on behalf of 20th century women crime writers has helped earn authors such as Higgins Clark the critical appreciation they so richly deserve.

Note: The following interviews were conducted separately, and no panelist was aware of other participants’ responses.

What was your first encounter with Mary Higgins Clark’s work, and what was your response to what you read?

Alafair Burke: I don’t trust my own memory, especially when it comes to timing, but I think I read Where Are the Children? when I was just getting to read “adult” books. I always had it filed away in my head with the Flowers in the Attic books, so I must have been 11 or 12 years old. My mom, a school librarian, was always on the hunt for age-appropriate books that would feed my insatiable desire for a good mystery. My guess is she was the one who found Where Are the Children? for me. There was this pervasive sense of danger and suspense on every page, but nothing that felt illicit or threatening for the eyes of a relatively young reader. I was obsessed.

Laura Lippman: I read Where Are the Children? when I was 11 and I thought it was one of the most thrilling books I had ever read in my life. It catapulted me into adulthood.

Sarah Weinman: I was in high school, around ninth grade, and I’m fairly certain I was reading first editions of her books that my great-uncle (who was for many years a sales rep at Harper & Row) kept in his basement. I definitely remember reading Weep No More, My Lady and Loves Music, Loves To Dance. Also A Cry in the Night and A Stranger Is Watching. I got to Where Are the Children? a little later in my teen years. But I also have a soft spot for Alvirah Meehan, who figured in many short stories (and the books Clark co-wrote with her daughter, Carol).

What are some of the defining characteristics of Higgins Clark’s brand of suspense?

AB: There was a timelessness to her characters. They tended to be, as she described them, “nice people whose lives are invaded.” While many of today’s bestsellers feature imperfect, complicated women whose “likeability” is subjected to fierce debate, Mary’s protagonists were earnest, well-behaved women subjected to danger through no fault of their own.

LL: The relatability of the main character, who’s always someone we can root for.

SW: I feel like Mary herself ought to answer this: “I write about nice people whose lives are invaded.” To expand on that a little, she wrote of ordinary but capable women caught up in extraordinary circumstances, with the agency to avert danger on their own. The early books are creepier than you remember. Then (probably around the time Alvirah showed up) her books softened in tone but she never lost her unerring ear for dropping just the right twist at just the right time to keep you reading.

She had one of the most remarkable records in contemporary publishing history; starting with her second novel, 1975’s Where Are the Children?, every book she published was a bestseller. Why do you think readers responded so strongly to her work?

AB: She had an innate sense of what her readers expected, perhaps because so many of her characters shared her own sensibilities and good-heartedness. I once drafted a scene for one of our collaborations in which a main character threw a coffee mug when she was mad at a boyfriend. I could tell when she called me to discuss it that she was worried about offending me or overruling me. But of course she was right. A Mary Higgins Clark character does not throw things. She quietly closes the door when the boyfriend shows up unannounced, and her message is clear.

Mary took seriously her commitment to readers, not just on the page, but also in person. Even with a long signing line, she happily took the time to talk to each fan, posing for selfies and listening to their stories about the role of her work in their lives.

SW: They believed in, related to, and wanted to be the heroines. They could read these books with multiple generations of women (and, occasionally, men). They could see how easily these situations could develop, and wonder how they could conjure their way out. Those are some of the things that crossed my mind whenever I read one of Clark’s novels.

Sarah, you wrote this in your Los Angeles Times piece: “She was the inflection point between the domestic suspense of an earlier era and recent psychological thriller blockbusters by Gillian Flynn, Paula Hawkins, and Megan Abbott.” Can you expand on that a little?

SW: Where Are the Children? fused the domestic suspense of Charlotte Armstrong, Margaret Millar, Dorothy B. Hughes, etc.—where danger lurked at home, or among loved ones—with ripped-from-headlines stories found in the tabloids. There’s an immediacy to Clark’s earliest work that paved the way for the “women in jeopardy” novels of the 1990s, and then the more robust psychological suspense of the writers mentioned, and so many more.

Just how great is her influence on today’s suspense and thriller fiction, and what’s her most important contribution to the genre?

AB: I think her impact on the crime fiction genre for women has been unappreciated. She wrote a smashingly successful bestseller as the widowed mother of five children, and then followed it up year after year with the same publisher and same publishing team. She was an undeniable force. And the result of her efforts—stories of everyday women encountering dangers that were often close to home—paved the way for the modern domestic and psychological suspense novel. A whole squad of contemporary female writers wouldn’t have our careers without Mary.

LL: I think she made the current domestic suspense craze possible. Although the books are very different, Gone Girl, The Girl on the Train, Alafair Burke’s standalones—they all build on the work that Mary did.

SW: I would say the influence is incalculable but let me try, just a little. Every few generations there is a crime novelist who knows what type of suspense and mystery will work for their generation. Mary Roberts Rinehart was one, starting in the late 1900s. Agatha Christie was one, for detective fiction. Helen MacInnes was one, for espionage fiction. And so was Mary Higgins Clark. 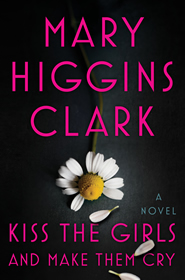 How has she influenced your own work?

AB: She has made me more comfortable relying on the old adage of “character is king.” In some ways, my plots have become a bit simpler, at least from a technical perspective. If the writer truly connects with the characters, sometimes the plots resolve themselves.

LL: She helped make me a crime reader, which is the first step to being a crime writer!

SW: Directly, that narrative drive is paramount. Indirectly, in the pursuit of the earlier generation of female suspense novelists as a reader, and then as an anthologist.

Alafair, you collaborated with Higgins Clark on five installments of the Under Suspicion series. What did you learn from working with her?

AB: As Mary’s lucky co-author for several years, and the daughter of James Lee Burke, I am in the unusual position of having seen firsthand what life looks like when a writer is in his 80s or her 90s and is working on a 40th or 50th novel. I know a lot of talented authors, but the ones who keep at it decade after decade never take their talent for granted. They have both an ingrained desire to write and the humility to sit down and grind it out. There’s no such thing as coasting.

On the Cover: Robert Desiderio

March 16 - 22: "How do you distance yourself from the characters you write?"