Our civilization is changing the earth’s climate, as evidenced by accelerated global warming and extreme weather—but what if instead of trying to fix that, somebody set out to make it even worse?

That’s the premise of CHILLING EFFECT, the latest book by thriller veteran R. J. Pineiro, who got his start writing science and military thrillers in the early ’90s and now has an impressive 20 novels in his bibliography. Pineiro recently sat down with The Big Thrill to talk about his high-tech background, the evolution of publishing, and infusing his thrillers with real—and sometimes terrifying—science.

What inspired you to write this book?

I’m an engineer by trade and I believe it is this passion for technology that fuels my drive for science-based thrillers. In the case of CHILLING EFFECT, that science is global climatology.

When I watch documentaries such as Planet Earth, One Strange Rock, or the Blue Planet series, I walk away with a couple of realizations: one, that our planet is amazingly beautiful but also quite fragile, and two, that our very existence depends on our planet maintaining a delicate balance between the interactions of the atmosphere, oceans, land, ice, and the moon, as well as the incoming energy from the sun and the radiation that reflects back into space.

It’s these forces that form the basis for our current and future climate, our global weather system. Any unbalance between them can and has resulted in weather pattern changes—some drastic. CHILLING EFFECT explores the dangers of upsetting this delicate balance—the fragility of our planet—through harrowing acts of ecological terrorism. The main antagonist is a former climatologist, so he knows where to strike to achieve the greatest harm.

Does the realistic nature of the threat make this book feel more real to you—less like fiction and more like a warning?

Look, I’m an engineer, and as such, I look at the data, at the facts that come out of my research. And those facts are telling me that we’re in the midst of dramatic changes in our global weather patterns.

CHILLING EFFECT explores this in depth to set the stage for the eco-terrorist. But let’s take a look at just one area of our complex weather system: ice. NASA images of Arctic ice or the Greenland ice sheet from 30 years ago vs. today tell a scary story: the ice is retreating. Is that a warning or just a reality that maybe feels like a warning?

There was a recent article in The New York Times that focused on Greenland and its retreating ice shelf. My research shows that losing the Greenland ice will result in an overall increase in global sea levels of around 24 feet. Just a rise of 2 to 3 feet—or 10 percent of the ice blanketing Greenland—will flood New York City, Boston, New Orleans, Miami, Houston, and Los Angeles, plus countless other coastal areas.

A complete meltdown of the ice on the earth’s surface would result in a sea level rise of around 220 feet. Antarctica alone contributes nearly 87 percent, or 191 feet.

A warning? I think so, and a very real one. In addition, tropical ice has all but vanished, except for the glacier atop Mount Kilimanjaro, which is barely hanging in there and which I profiled in CHILLING EFFECT. And to me, this all means that our planet is getting warmer.

And here is a frightening discovery: the permafrost—the frozen soil that covers most of northern Alaska, Canada, and Siberia—is thawing during the summer months, causing buildings to collapse and also creating “drunken trees” due to the softening of the soil in affected forested regions. The biggest threat, however, comes from the potential release of as much as 2,000 gigatons of methane, an extremely effective greenhouse gas trapped beneath the permafrost since it was formed 11,000 years ago at the end of the last ice age.

I think the question that needs to be asked is: do you think that perhaps as a species, humans could be doing more than we currently are for the benefit of this very fragile planet of ours?

What books or authors have inspired your career and why?

Stephen King. Although I don’t write horror, King is truly the “king” of the genre because of his ability to wordsmith some of the most frightening tales I’ve ever read.

The late Tom Clancy, creator of the traditional military-fiction genre that influenced so many of my books.

Herman Wouk, whose classics The Caine Mutiny, The Winds of War, and War and Remembrance are prime examples of unparalleled characterization.

With so many books under your belt, how has your writing process changed over the years?

I think that the biggest change has been my increased attention to character development. Sure, the plot—the story—needs to be exciting and original, but it’s the characters that keep readers turning the pages. If a reader identifies with one or more characters, then she or he will get drawn into the story. It is crucial to get the reader inside the heads of the characters, so they feel what the characters feel.

In addition, for all of my career, I wrote military-espionage thrillers in the epic-style format, meaning there are multiple storylines shown through the eyes of multiple characters (Clancy-style) and written in the third-person past tense. I made an experimental departure from that last year with Avenue of Regrets, my first foray into the suspense-mystery genre. It was written in the first-person present tense through the eyes of just one character, so the reader discovers what’s happening at the same time as the main protagonist, and that also means that for the entire novel, the reader is inside the head of the protagonist.

To me, it was an incredibly difficult task because it took me way out of my “epic-thriller” comfort zone, but I believe that the end result was worth the effort. The novel received enough positive reviews to encourage me to do a second project in that genre (currently in the works for later this year). But while characterization is crucial, I continue to push the envelope on original premises, like the one in CHILLING EFFECT, which required significant amounts of research.

And how has publishing changed?

Talk about a dramatic change. Amazon greatly enhanced the world of indie publishing, and I believe it has rattled traditional publishing to the core. If an author has a great novel, he or she is no longer bound by the traditional path of securing a literary agent and then having that agent convince a publisher to do the book. KDP (Kindle Direct Publishing) takes care of everything.

Books like The Martian and The Shack are living proof that authors no longer need to rely on that traditional system to get work in front of millions of readers. I’m what’s called a hybrid author because I’ve worked with traditional publishers, like Berkley, Tor-Forge Books, Thomas Dunne Books in New York, and also Ignition Books out of San Diego. But I also was assisted by Auspicious Apparatus Press to use KDP to publish novels that were departures from my traditional military-political thrillers.

And I also believe that more changes are coming. Another thing that has changed is industry book reviews. When I began writing fiction in the early 1990s, outlets such as Publishers Weekly, Booklist, and Kirkus would not consider a novel for review unless it was done in hardback first, and it also had to come from a “real” publisher. It’s very different now.

The novel I mentioned earlier, Avenue of Regrets, was independently published via KDP (because my traditional publisher didn’t like the idea of deviating from my decades-long epic-thriller military-political genre) and it was received quite positively by PW, Kirkus, and also a host of indie reviewers like Foreword Reviews, Midwest Book Reviews, and The San Francisco Book Review. So, another change—for the better, I think. 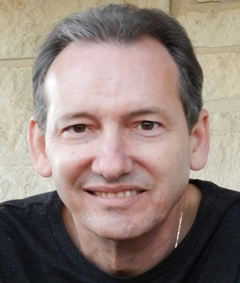 Born in Cuba and raised in Central America, R. J. Pineiro spent several years in the midst of civil wars before migrating to the United States in the late 1970s, first to Florida to attend Florida Air Academy in Melbourne. There, R. J. earned a pilot’s license and high school diploma in 1979 before heading to Louisiana for college.

R. J. earned a degree in electrical engineering from Louisiana State University in 1983 and joined the high-tech industry in Austin Texas, working in computer chip design, test, and manufacturing.

R. J. is married to L. M. Pineiro, an artist and jewelry designer. They have one son, Cameron & daughter-in-law Sarah, and two crazy dogs, Coco and Zea.