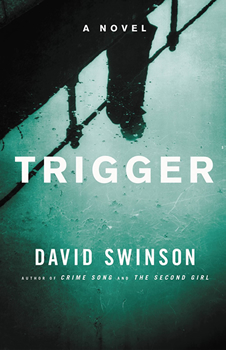 The inciting incident of TRIGGER, David Swinson’s third novel featuring ex-cop-turned-private investigator Frank Marr, is, as they say on television, “ripped from today’s headlines.” Frank’s ex-partner and best friend, Al Luna, has been involved in a shooting that leaves a young black man dead. Al swears the kid had a gun, but none was found at the scene. Frank leaves no piece of concrete or Dumpster unturned in his search for the truth and to prove the shooting was justified.

Swinson, himself retired from the DC police force, spent 16 years—12 as a detective—on the streets of the nation’s capital. He knows from where he writes.

“Listen, terrible mistakes happen with police,” he says. “Some of them are justified, some are criminal. But no cop has ever gotten out of bed in the morning and put on their uniform and gun thinking, ‘I’m gonna shoot someone today.’ And keep in mind, cop-related shootings have not gone up over the years. What’s changed is the widespread use of smartphones. So much of what happens these days is caught on video.”

Swinson says he took on the controversial topic because he wanted the reader to look at the situation from both sides—“not just the cop side”—and to see the realities of each perspective.  “My goal was to be sympathetic and honest to both sides,” he says. “A tragedy like this never has an ending; there is a lot of area in between, a lot of gray. The Al Luna shooting is my way of showing that good cops can get involved in bad situations.”

As Frank is busy trying to redeem Al’s reputation, another type of redemption plays out in TRIGGER, thanks to the return of a memorable character from the first Frank Marr novel, The Second Girl. Returning for another shot at life is Playboy, a.k.a. Calvin Tolson. The first time we met Playboy, Marr tried to kill him and Playboy ended up locked in the trunk of a car.

“After not killing him in the first Frank Marr book, I knew Playboy would have to come back sometime,” Swinson says. “This kid, like a lot of them in real life, was quite frankly scared straight. I wanted to show an ex-thug doing the right thing. I had a lot of ‘Playboys’ in my life as a cop. I had this one kid in particular who I’d locked up a few times. Some time later I was getting a sandwich and there he was working at the store, behind the counter.”

Not coincidentally, that’s exactly how Playboy comes back into Frank’s life. Frank decides to take him on as a protégé, someone to mentor in the PI business and whose talents and knowledge might help him clear Al. (Swinson refers to TRIGGER as the third in the Frank Marr trilogy. You can add my name to the list of readers who want to see another adventure with Marr and Playboy.)

As for his approach to the craft of writing, Swinson says he doesn’t outline, but he does plenty of groundwork. “Before writing a novel, I take copious—tons and tons—of notes until I feel I’m ready to start,” he says. “Then I get in my recliner with my laptop and start writing. My day’s over when I get that feeling that I can’t write anymore that day.”

“Besides,” he adds, “I have a daughter I have to pick up from school, so that gives me a reason to stop writing.”

I ask Swinson if he ever finds himself writing out of sequence, having to skip to a scene he knows he needs, but not sure of what comes next. “No,” he says. “I write straight through using the notes from my notebook. Stuff happens when I’m writing. I know my characters so much they don’t allow me to think twice. They just do the things they would do in their world.”

As for research, Swinson explains he’s done much of it already—by living it. “I worked Major Crimes/Career Criminal Unit,” he says. “I had to experience this stuff. Like Michael Connelly gets Bosch right [because] he embedded himself in that world as a journalist. You get to know the world you’re writing about that way.”

One thing that stands out while reading TRIGGER is Swinson’s use of short chapters. (The average chapter is about four pages.) “That’s very natural to me,” he says. “I just know when a chapter is ‘done’ and I don’t want to waste time getting to the point. I know when it’s time to stop a chapter. It’s not something I think too much about. It’s purely accidental.” When I bring up the idea that he was perhaps manipulating the reader into reading quickly, we both laugh. Writers manipulating their audience? Call the literary police!

Another technique Swinson uses to keep the reader turning pages is telling the story mostly through dialogue. He says that trick was inspired by one of his favorite novels: Harper Lee’s To Kill a Mockingbird.  “Think about it,” he says. “If that book came out today, it would be marketed as a mystery/suspense novel. A legal thriller. It’s told in the first person—as are the Frank Marr books—and that inspired me.”

Unlike Mockingbird, though, the dialogue in TRIGGER is not often racially identifying. Swinson says that’s intentional, and that most characters in his books could be any race—a conscious choice on his part.

Since TRIGGER was my first introduction to Frank Marr, I was curious about what inspired Swinson to create the character. “He’s actually kind of an homage to Hunter S. Thompson,” he tells me. What?

Swinson explains, “Prior to becoming a cop, I had another life as a booking agent at a club called Bogart’s in Long Beach, California. I had to fill seven nights a week. Everyone from The Red Hot Chili Peppers, The Pixies, to Devo played there. Wednesday was our off night. Nothing seemed to work, so I did An Evening of Conversation, when we’d book authors, filmmakers, and so on. It turned out to be very successful. John Waters made two appearances, Henry Rollins ranted, Timothy Leary went off into his virtual reality world.”

Swinson contacted Thompson’s lecture agent and asked if Thompson would consider speaking and doing a Q-and-A with a large audience at a nightclub. “This was a first and something Hunter had never done,” Swinson says. “The first two shows sold out in advance and had Grace Slick and Paul Kantner of Jefferson Airplane do the introduction. I was so taken by Thompson—who at one point wanted to be a sheriff—that he stayed with me, and ultimately, all these years later, a piece of his character was born into Frank Marr.”

As for Swinson’s ideal ThrillerFest panel? “I would love to participate in a panel with another writer and both of our editors,” he says, “to talk about the working relationships we have, and the editorial/creative partnership. I’d also love to participate in a panel with other crime writers to discuss our writing process, our writing environment, and if we have that one go-to book that we always read for inspiration, and why. Mine is To Kill a Mockingbird.”

Finally, I ask Swinson about Al Luna’s line from TRIGGER: “Never say you’re sorry.” Is that a cop philosophy?

“It’s not so much Al’s philosophy as it is what was ingrained in us as cops,” he says. “Not by officials or the academy, but other cops. He can’t apologize because even though he’s wrong, that apology would make him guilty. We never said sorry.” 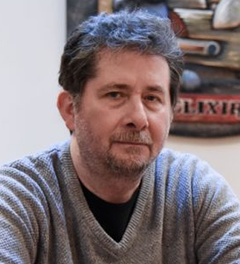 Swinson began his career at the height of the punk rock movement in the early 1980s. After attending California State University as a film major, he booked and promoted punk rock and alternative music at Fender’s Ballroom, Melody Dance Center and Bogart’s Nightclub in Long Beach, California.

Swinson also started a Wednesday night evening of conversation and spoken word at Bogart’s with luminaries such as Hunter S. Thompson, Dr. Timothy Leary, John Waters and Jim Carroll. After several years of booking, promoting, as well as developing lasting relationships with such people as Timothy Leary and Hunter S. Thompson, it was a natural segue to develop and co-produce Sound Bites from the Counter Culture for Atlantic Records in 1990. This spoken-word compilation featured writers, orators and politicians, including Thompson, Leary, Carroll, Abbie Hoffman, and Eugene McCarthy. Billboard called the album “essential listening.”

In 1990, while having drinks with Timothy Leary and friend Billy Henderson, an idea for an offbeat buddy film entitled “Roadside Prophets” was conceived. The film eventually found a home with FineLine Features and was distributed theatrically by New Line Cinema. The film starred John Doe (of the band X) and Adam Horovitz (of the Beastie Boys) and featured Timothy Leary, John Cusack, David Carradine and Arlo Guthrie. Over the past few years, “Roadside Prophets” has become a cult classic among young viewers.

In 1994, Swinson pursued another passion – law enforcement. He is a highly decorated member of the Metropolitan Police Department, having received numerous awards including the department’s prestigious Detective of the Year Award for 2003; Meritorious Service Medals for significant, outstanding and sustained achievements; Achievement Medals of Honor for a significant case investigation and several Department of Justice, United States Attorney’s Annual Law Enforcement Awards for significant case investigations.He has also received to major awards from Target Corporation for outstanding community service.