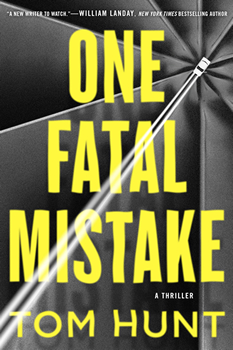 Her son accidentally kills a man.

They cover it up.

Then everything goes wrong.

When eighteen-year-old Joshua Mayo takes a man’s life in a horrible accident, he leaves the scene without reporting the crime to the police. He hopes to put the awful night behind him and move on with his life. But, of course, he ends up telling his mother, Karen, what happened.

Karen has raised Joshua on her own in Cedar Rapids, Iowa–and she’d thought they’d finally made it. He was doing well in school and was only months from starting college. After hearing his dark confession, she is forced to make a choice no parent should have to make, one that draws them both into a web of deceit that will change their lives forever–if they make it out alive….

The Big Thrill spent some time with author Tom Hunt discussing his latest thriller, ONE FATAL MISTAKE. Here’s what he had to say:

I hope they’re entertained. That’s really it. I had a fun time writing ONE FATAL MISTAKE, and hope readers have a fun time reading it!

I think it’s always surprising to see how the book takes on a life of its own and differs from your initial synopsis as you progress and write it.

I grew up in Iowa, and I always felt like a farm would be a really great setting for a thriller novel. It’s isolated, out in the middle of nowhere, there is no one to turn to for help, etc. A major portion of ONE FATAL MISTAKE takes place on a farm, and I think the isolation really adds to the atmosphere.

Tom Hunt is an award-winning advertising copywriter. He has worked for some of the nation’s largest and best-known agencies, including J. Walter Thompson and Saatchi & Saatchi. Killer Choice was his first novel.