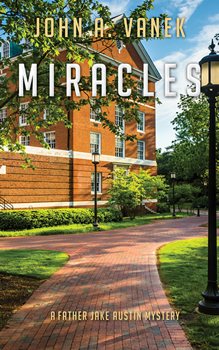 Jake Austin is a busy man. The protagonist of John A. Vanek’s latest mystery, MIRACLES, is not only a Catholic priest with a medical degree but also, when necessary, a crack detective.

The second book in the Father Jake Austin Mystery series opens as Father Jake has recently returned home after a stint as an army medic. In the midst of searching for inner peace, Jake’s life is hurled into the vortex of three storms. His sister is dying in the hospital, and Father Jake must take care of her young son; in another parish there’s a controversial bleeding Virgin Mary statue, and Father Jake is assigned to look into the matter; and there’s a comatose infant hovering precariously between life and death in the intensive care unit of the local hospital. It appears he’s a victim of Sudden Infant Death Syndrome (SIDS), but suspicion arises that his impoverished parents might have had something to do with the child’s affliction.

Like Father Jake, Vanek has also been a busy man. Originally trained in a surgical specialty, he says he switched to radiology “for a saner lifestyle.” Along the way, he took up writing, the result of a creative writing class he took as a pre-med student.

“I fell in love with the craft and I was encouraged by my professor to pursue writing,” Vanek says. “After establishing myself in private practice, I tried to write but quickly discovered I didn’t have the skill set.”

Well into his career as a doctor, Vanek couldn’t shake the writing bug. He decided to learn the craft by taking creative writing classes at local colleges and attending workshops. Initially drawn to poetry, he soon “graduated” to starting a mystery series, making the heroine of his novels a poet. Like many of us, Vanek has two so-called beginner novels that he says will “remain buried forever in my desk drawer. As a proud graduate of the School of Rejection, Revision, and Hard-Knocks, I’m proof that dreams deferred are not necessarily dreams denied.”

Vanek was born and raised near Cleveland, Ohio. “We were a blue-collar family with aspirations of attaining the American Dream,” he says. His father began as a journeyman in a foundry, worked his way up, and retired as president of the company. His mother was a homemaker. Neither were college graduates, but that’s what they wanted for their children. Vanek’s brother earned a master’s degree and taught school, while Vanek graduated from Case Western Reserve University, earned his medical degree at the University of Rochester, and then completed a residency at the Cleveland Clinic. Now 70, Vanek married his college sweetheart 47 years ago; they have two married children and six grandchildren. The author recently retired to Florida, where he teaches poetry and creative writing to seniors.

“I practiced medicine in Ohio for 30 years, which provided me with skills I’ve shared with Father Jake in my novels,” Vanek says. “Also, dictating reports with enormous medical-legal implications taught me to be thoughtful and careful in my selection of words.”

It isn’t accidental that Vanek uses his own experiences in his fiction. “I believe in ‘write what you know,’ and I know well the world of medicine, where hospital personnel witness incredible bravery and horrendous human suffering on a daily basis,” he says. “Many of my patients are etched in my memory to this day. Although I enjoy novels with hardboiled, kick-ass detective characters, I wanted to blaze a different path.”

Vanek’s work in a Catholic hospital led to the creation of Father Jake, a character largely informed by two priests he befriended during his stint there. “Knowing them shattered my stereotypes and made me realize that priests, like everyone else, are simply human beings—noble qualities, flaws, and all,” he says. “And that’s how I portray Father Jake. Over a couple beers, one priest friend confided his romantic feelings toward a nun, with which he struggled mightily. His unrequited love and ongoing internal struggle became the seed that germinated into Father Jake and his relationship with his ex-high school sweetheart, Emily.”

About his character, Vanek says, “Father Jake is forced to evolve, as we all are, and as Jake’s creator and tormentor, I sometimes make his life hell. While trying to solve the central mystery in MIRACLES, Jake must also deal with his sister’s illness, the welfare of his four-year-old nephew, and his developing relationship with Emily, the woman he loved and lost. Fiction writing is a bit Darwinian. Characters must evolve or die.”

Vanek doesn’t plot out his novels beforehand, preferring to let his characters’ choices shape the story as he writes it. “I don’t outline my novels, but I do know how the novel starts [and] roughly how it will end, and then set up challenges for my characters and let their reactions steer the plot from chapter to chapter,” he says. “Sometimes their responses send the story in an unexpected direction, which for me is the fun part of writing.”

In MIRACLES, the reader gets more than an interesting plot. “I hope my novels not only entertain, but also teach something new,” Vanek says. “In fact, the nicest compliments I receive from readers are when they express their pleasant surprise at learning about both medicine and Catholicism. I especially hope to break stereotypes about the priesthood. Placing all priests on pedestals is as ridiculous as condemning them all as pedophiles and degenerates. Father Jake, and most priests, are simply spiritual beings making their way through a secular world.”

Vanek says his writing has been influenced by writers like Laura Lippman, Sterling Watson, Michael Koryta, and Dennis Lehane. “All of them have encouraged me on my writing journey,” he says, “and I’m sure, to some extent, they’ve all influenced my writing style.”

The third book in the Father Jake Austin Mystery series is completed and currently undergoing final revisions. “I’ve begun writing the fourth book, and it appears that Father Jake may be transferred to another parish, maybe in a city near you. And, like my heroine Emily, I continue to write poetry, and a fine composer has asked to use my recently published villanelle as lyrics for a song,” Vanek says, then adds, “Life continues to thrill and surprise.” 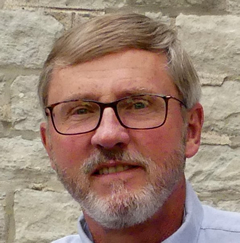 Although John Vanek is a physician, writing is his passion. Medicine is his wife, writing his mistress, and mysteries are his drug of choice.