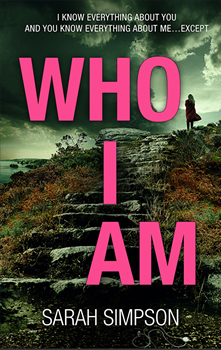 Andi met Camilla at university. Instantly best friends, they shared everything together. Until their long-planned graduation celebration ends in tragedy…

Years later, Andi is living a seemingly perfect life on the rugged Cornish Coast with her loving husband, happy children and dream home. Yet Andi is haunted by a secret she thought only she knew.

Someone out there is bringing Andi’s deepest fears to life. And she knows there’s no escaping the past that has come back to haunt her…

You trusted me with your secrets, you told me everything, you thought I was your best friend… but you have no idea WHO I AM.

Gripping, unputdownable and packed with twists and turns from the first page to the very last, this stunning psychological thriller will make you question whether we can ever really trust the ones we love.

Author Sarah Simpson met with The Big Thrill to discuss her latest psychological thriller, WHO I AM:

It’s better to be disliked for who you are than liked for who you’re not! This is a story of two individuals with completely contrasting backgrounds but with the same emotional needs. Nether fully appreciated the importance of honesty, both made huge assumptions believing the grass was always going to be greener on the other side.

This is a complex, emotionally twisted plot, with each character having a purpose, with something to hide and at times lacking clarity and honesty. It incorporates issues within emotional health adding to the psychological tension and there are many twists and turns, some darker than others…

I think it brought home the fact that it is often not what we know, but what we perhaps don’t know and in this case – who we don’t know. Even when we are sure we do.

This novel deals with some sensitive issues outside the normal range of emotional stresses, such as alcoholism, trauma, depression, and anxiety.

Too many to list individually. I have learned from many gifted writers along my way. My greatest influencers as a child have to be Agatha Christie and her brilliant way of implicating all characters into the plot twists, with such unadulterated glamour. Then of course, Enid Blyton for firing my imagination and taking me to another secret world of pure fantasy and wonder. 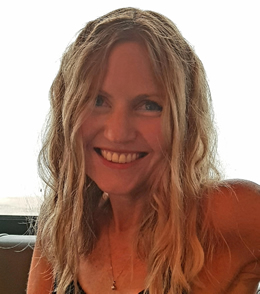 Sarah’s debut novel, Her Greatest Mistake, reached number 16 on the UK Kindle chart and achieved a bestseller flag within its specific genre. It also reached the top 10 in both Australia and Canada and again achieved the bestseller flag.

Her second psychological novel, WHO I  AM, was released on November 6, 2018.

Sarah has a business degree and a first class honours degree in psychology with postgraduate qualifications. Her background, working privately within mental health for many years; within the collaborative family law arena; and with additional experience within the family court system, has gifted her an invaluable understanding of life and people.

She is relatively late to the writing scene. Despite a love of books and writing from when she was very young, it wasn’t until 2016 that she sat down to put pen to paper. Her Greatest Mistake was then some 12 months in creation, followed by some vigorous re-writing. In June 2017, she signed with her current agent Broo Doherty and shortly after was offered a three-book publishing contract with Aria/Head of Zeus.

Sarah now lives in a small coastal town in beautiful Cornwall with her husband, three children, German Shepherd, and cat.