Plunging Deep into the Heartlands of 18th Century Espionage 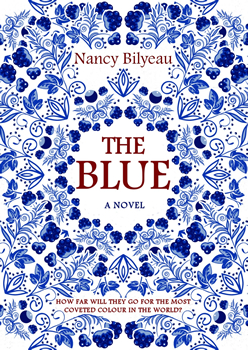 Nancy Bilyeau knew she needed a break from the Tudors. The era had inspired three successful novels, but she was ready for a change. Yet it wasn’t until she toured the Hillwood Estate in Washington, DC—a museum, of sorts—that a lightning bolt of inspiration hit.

“The tour guide said about the porcelain factories, ‘There was a lot of spying and competition. It was the space race of its time,’” Bilyeau says. “And I thought, ohhhhhhhh. Yes!”

As a self-proclaimed espionage fanatic—having read authors like John le Carre, binge watched shows such as The Americans and Homeland, as well as collecting several non-fiction works to fuel her obsession with spies—Bilyeau knew she’d hit on a theme.

But what to do with the plot?

“In my Tudor trilogy I wrote mysteries that revolved around a relic, a book, a poisoned cup. It was fun but I wanted to take it up a notch. Do something different,” she says. “The color blue seems to exert a powerful fascination.”

In fact, Bilyeau says the color is in a class all by itself, in part because the pigment isn’t found in nature and is difficult to create.  “There was a period in time when the only way to be sure to achieve a beautiful blue pigment was grinding up stones found in the caves of Afghanistan.”

The color’s scarcity in the 18th century, coupled with the time period’s propensity for espionage—invisible ink, along with a number of other spy tools, was made use of during the Seven Years War and the American Revolution—provided the perfect backstory for THE BLUE, a riveting historical novel of suspense that follows the story of Genevieve Planche, an English-born descendant who longs to be an artist.

Unfortunately, female artists aren’t taken seriously in London and to follow her dream, Genevieve must do something that goes against her beliefs and also puts her in grave danger: learn the secrets of porcelain—in particular, the secrets of the color blue.

“The 1750s and 1760s were the beginning of radical political thought in England, although some of it was building on the English Civil War and Cromwell of a century previous. We saw all of this lead to the American Revolution and then the French,” says Bilyeau. “So I could instill Genevieve with revolutionary beliefs and remain accurate to the time. She wanted equality and was inspired by Rousseau and other transformative thinkers to demand it, and when it was elusive, to decide to do something unethical to get what she wanted. Women did work in London then. She could have been a silk painter or a porcelain painter in the 1750s. It’s the ‘fine art’ career that was closed to her. One reviewer has called her a ‘working class artisan.’ I liked that. I’ve been blocked by snobbery at different points in my life and I used that to fuel my character.”

Indeed, Genevieve is a strong female character whose wits and strength are challenged as she is plunged deep into England’s emerging industrial heartlands to learn not only about porcelain, but also the art of espionage.

With each exquisite twist and turn, Bilyeau layers in the kind of research nuggets that have made her an expert in the genre. The result is a novel so well-researched that the 18th century emerges from the page with unparalleled authenticity.

It’s clear that this is not Bilyeau’s first foray into the era—she once wrote a screenplay about Mary Wollstonecraft and her next novel will be set in the same time period—but Bilyeau admits her research took her down some intriguing rabbit holes.

“Did you know Defoe and Casanova both dabbled in spying? That surprised me, and was helpful,” she says. “Another surprise was the relationship between Madame de Pompadour and Louis XV. It stopped being sexual and yet for years afterward she was the most important person in his life. He couldn’t express emotions easily. On the day of her funeral it was raining and he said only, ‘The marquise won’t have good weather for her journey.’ He was the absolute ruler of the country considered the most important on the planet and it was an excruciating burden. He could see everything was falling apart but he didn’t know what to do about it.”

A powerful commentary on the importance of relationships, and perhaps fodder for the romantic interest in Genevieve’s life during her dangerous and important quest. But to find a match for her strong-willed and passionate protagonist, Bilyeau needed a perfect companion, and so she turned to the rockstars of the 18th century—a chemist.

“He had to be extraordinary, but I hate perfect love interests, so I gave him flaws and frailties too,” she says. “He evolved and changed the most as I wrote. Sometimes he surprised me while I wrote him.”

The novel, both beautifully written and historically impressive, delivers surprises not only for the author, but for the reader as well, demonstrating just how much one is willing to suffer in pursuit and protection of their dreams.