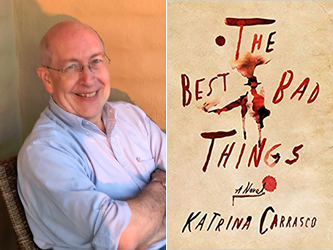 An ex-Pinkerton agent named Alma Rosales is hunting for opium stolen from her employer, criminal boss Delphine Beaumond, one of the most dangerous women in the Northwest. Also on the hunt is a dockworker named Jack Camp, a rough brawler with his own plans for the opium. Neither knows for sure whom to trust, for each knows all too well that in Port Townsend, nobody is who he or she seems to be.

Because Alma Rosales and Jack Camp are the same person.

Katrina Carrasco’s THE BEST BAD THINGS is a terrific historical crime novel, filled with action, atmosphere, twists, and glorious writing—but it is also a direct challenge to the idea that masculine and feminine identities are fixed opposites. Alma uses whatever persona she needs to advance her investigation, from ingénue to roughneck to the gray spaces in between, carefully calibrating her signifiers to achieve the desired performance. What is she? Whatever she needs to be.

How did the author come to this idea? “I was born and raised in California, have been living in the Pacific Northwest for about 10 years, and have a special interest in the history of the American West,” Carrasco says. “While this is my first published novel, I wrote two others first (now forever shelved) that explored California and Oregon in the second half of the 1800s. By happy coincidence, I wanted to do a book about the Washington Territory just as I started developing a new character, who became Alma Rosales.

“The piece that really set things in motion was finding an article from the 1890s that insinuated that a man in the PNW was singlehandedly controlling the region’s opium trade. This helped me create Delphine Beaumond, the smuggler mastermind of the book—not a man, after all, but a woman, accumulating wealth and power quietly while the authorities searched for a male culprit. 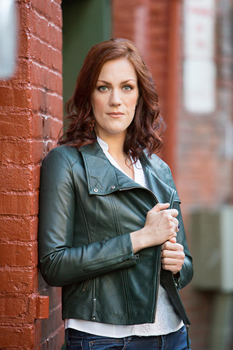 “With Alma’s character, I really got to dig into the performance of identity, one of my great interests. To me, Alma falls on the more masculine side of the spectrum; she’s always a little too rough and combative to be comfortable in women’s clothes (especially the women’s clothes and strict social roles of her time period). But she also performs masculinity in ways that aren’t very commendable: joking about women with men, for instance, or behaving crudely toward a woman the first few times they meet. It could be said that, by strongly performing toxic masculinity, Alma becomes a little unsavory herself.

“My experience of gender performance, by contrast, has been until recently defined by strongly performing femininity, especially in terms of appearance. Before I came out as gay, I was afraid to exhibit or even accept some of my own more masculine qualities. The result was that I was frequently exhausted by the sense of always playing a part, and felt like I wasn’t able to be my full self with others. Coming out gave me a lot of freedom to explore what it felt like to wear men’s clothes, or wear my hair short, or not wear makeup. Now I’ve come to a place where I feel like I can comfortably toggle between a more masculine or feminine energy, and have that be reflected in my appearance, and be present with others in a way I’ve never been able to be before.

“My mother is Ecuadorian-American and my father is white. Growing up as white and Latinx, I formed an early understanding (though I didn’t have the vocabulary for it, at the time) of passing, code-switching, and what it means to hover between two identities. This is one of the roots of my interest in the ‘gray spaces in between.’ I am interested in creating characters who experience similar conflicts—who have to learn early how to navigate two or more communities and the expectations of each.”

Alma’s own navigation of all that is tricky, but she glories in it, seducing a man by playing a naïve young Scottish girl, then turning around and seducing him again—as Jack Camp. In that, the gender exchanges mirror the extraordinary plot reversals, the double and triple crosses, as each character in the book tries to outwit the others, knowing full well that failure is likely to find them floating in the harbor or bleeding in a dark alley.

The book is also full of acute observations and vivid descriptions, sudden rushes of prose and small grace notes: an oyster vendor, “his clanging handbell, his buckets of ice and winking shells”; a ball of sandwich paper, “it unwrinkles, slow, with little ticks of sound.” 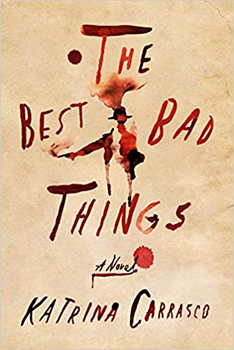 “I chose a very specific style, to suit Alma and her sharp, quick thinking,” Carrasco says. “As part of this style, the prose can be staccato and aggressive, especially in fighting scenes. I used this (along with the very close third-person point of view) as a tool to bring the reader even nearer to Alma. It was interesting finding a balance between ‘Alma’s style’ and my own; I tend to be a very sensory writer, interested in creating an immersive, lush feel to the world I’m writing. So I worked to craft a blend of Alma’s energy and my own tendency to linger on details. I think the small, quiet moments work so well because they filter my love for details through Alma’s quick-fire perception of her world, so we get to experience it as she does, in small sharp flashes.”

It’s a book that obviously required considerable research. So, how did she go about it?

“Thanks to my previous projects, I’d already amassed a wealth of information about the era and setting, and had several key texts, chief among them, Richard Dillon’s Shanghaiing Days, an account of crime and maritime trades in 19th century port towns. To specifically prepare for the book, I went to Port Townsend to visit its museums and historical society, as well as the town itself, which has a high number of preserved historical buildings due to an economic crash closely following a building boom in the late 1800s. I also dug into the excellent newspaper archives at the Tacoma Public Library, which has a collection that includes materials on much of Puget Sound.

“Some of the most interesting things I found were detailed accounts of how opium was smuggled into the country from Canada. Bought-off customhouse inspectors would mark crates of tar with special chalk marks to ensure passage through customs; innocuous-seeming steamboats had false lockers in their holds to conceal opium shipments; and boats disguised as fishing vessels were laden below-deck with opium. The methods employed by the smuggling ring in the book were all based on tactics used by 1800s criminals.”

And the research involved more than just combing through books and archives. Jack Camp is an accomplished street fighter and one key scene is set around a graphic boxing match, followed by some of the best sports double-entendre banter since Bogart and Bacall in The Big Sleep, and a bare-knuckled brawl. To get it all right, the author joined a boxing gym—and ended up falling in love with the sport.

“It requires one hundred percent of my concentration,” she says. “This is true of bag and mitt work and other practice, and it is especially true of sparring. When I’ve got my gloves on and I’m working out, alone or with a partner, my mind is quiet. I’m only thinking about the next move, the next punch, the next slip. I love the clarity of focus. Also, it’s particularly satisfying to throw good punches and feel the power and quickness of my own body. I based a lot of Alma’s love for the sport on my own physical enjoyment of it.” 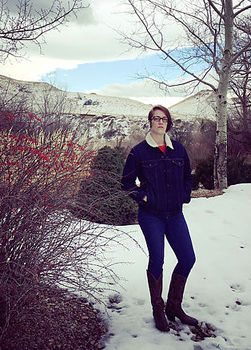 It’s not the only physical sport she’s been drawn to. She’s also played basketball, rowed competitively, and taken up powerlifting.

“I’ve been an athlete since I was a teenager. Part of me just loves competitive sports. But also, every day, I am grateful for my body and the things it can do. I love being active, trying new sports and pushing myself to get stronger. In our culture especially, there’s a lot of fear of physically strong women—women who ‘take up too much space,’ who don’t conform to the accepted standards of femininity. I’ve always been tall and strong, and at some point in my late twenties, I decided to stop listening to cultural messages telling me to be ashamed of my body. I decided to love my muscles. In terms of sheer, measurable progress, powerlifting has been the most satisfying sport, because I can track how much more weight I can move each time I work out. I’m competing with myself, and I’m proud each time I improve.”

Those improvements have come in several forms, not just in the gym. She’s had many mentors, many influences, and the support of many prestigious writing programs and grants.

“I was also incredibly fortunate to be invited to my first residency, at Yaddo, a few years ago,” she says. “At the time, I was working on this book, preparing to do a second draft revision. Having the backing of such a stellar residency made me gutsy—in my time in residence, I was going to figure out all the tangles in my complicated plot and not water down any of Alma’s riskier decisions. While at Yaddo, I was able to completely immerse myself in the world of the novel. I had all day, every day, to write: I covered my wall with Post-it notes of scenes and spent long morning walks ‘talking’ to characters to see what their dialogue sounded like, and what surprising shifts their storylines could take. In six and a half weeks, I accomplished months’ worth of work, and left the residency with a completed second draft, which was ready to query a few months later. For sheer energy and productivity and writerly confidence, especially in terms of THE BEST BAD THINGS, Yaddo was a great gift.”

And the next book? “It’s in the world of THE BEST BAD THINGS,” Carrasco teases. “I can’t talk about it too much yet, but I’m already having a lot of fun writing it.”

If it’s anything like her propulsive, sexy, singular debut, the fun will be ours, as well.

Katrina Carrasco holds an M.F.A. in fiction from Portland State University, where she received the Tom and Phyllis Burnam Graduate Fiction Scholarship and the Tom Doulis Graduate Fiction Writing Award. Her short stories have appeared in Witness, Post Road, Quaint, and other journals, and her nonfiction can be found at Autostraddle. She has been awarded residencies at Yaddo, Blue Mountain Center, I-Park, Jentel, and Willapa Bay AiR, and received a 2017 Grants for Artist Projects award from Artist Trust. She lives in Seattle with her two dogs. THE BEST BAD THINGS is her first novel.

To learn more about Katrina and her work, please visit her website.

This column originally ran on BookTrib, where writers and readers meet: