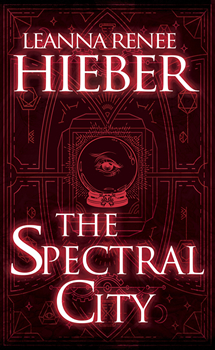 Perhaps that should come as no surprise. An online search for “ghosts of New York City” yields more than 80 million results, while “haunted New York City” garners more than a hundred million. The Big Apple loves its haunts, and Hieber’s work is both haunted and haunting, her spectral characters as developed as those of flesh and ink.

Set in 1899, THE SPECTRAL CITY features Eve Whitby, a gifted young medium in charge of New York City’s Ghost Precinct. When her ghostly contacts begin to disappear, Eve and her network of fellow psychics and wayward ghosts must work with the diligent but skeptical (and all too attractive) Lieutenant Horowitz to thwart a force so evil it threatens even the dead.

Asked what readers can expect from her book, Hieber says, “I hope readers will feel connected to Historic New York and also think about the bond between the living and the dead as something beautiful and full of interest and help.”

Her ghosts are not the horrifying specters depicted in Hollywood horror films. “I’m interested in presenting ghosts in a helpful, friendly and unique light,” she says, “and I hope this provides a compelling paranormal adventure that’s refreshing for readers. I hope readers will love my mediums, a group of young women who are brave and professional, at a time when women were emerging presences in the average workforce. I hope readers will love a realistic 19th century New York where the paranormal is normal; a seamless blend of history and fantasy.”

Hieber feels that mystery and thriller elements have always been “the core and binding part” of her cross-genre work. She blends crime and suspense with supernatural elements and a rich historical setting. Her research into the creation of the New York Foundling Hospital led to some of the novel’s more poignant moments.

Let’s welcome her to The Big Thrill.

Congratulations on your new book, Leanna! And thank you for taking the time to talk to us about it. Why don’t we start with a little bit about your writing journey and how you came to be a professional writer?

I fell in love with Edgar Allan Poe in grade school and never looked back. I began my first novel around age 11, set in 1888. My chosen time period has been a life-long obsession. Mutually in love with the stage and the written page, I graduated with a BFA in theatre performance with a focus in the Victorian era. Years later, at a Broadway callback, all I could think about was the book that became my debut novel, so I shifted my focus and placed novel writing at the fore.

You describe your work as Gothic, Gaslamp Fantasy with strong elements of mystery and suspense. Tell us a little bit about the genre and what attracts you to it?

The Gothic novel, one of the most misunderstood and maligned genres in literary history, has always had its finger on the pulse of popular fiction, intimate psychology and internal conflict. Writing deeply passionate, psychological, and spirit-filled novels in a historic setting allows me to grapple with important aspects of human existence as a timeless question while crafting a gamesome adventure in lyrical prose. Nineteenth century Spiritualism cracked open society’s understanding of life and death, paving the way for new voices in a restrictive time period. My characters live fully in that freshly carved historic space full of wonder and possibility.

Why did you choose turn-of-the century New York City for this book?

Gilded Age New York City is dizzying in its wealth as contrasted with its squalor, great works of philanthropy balanced against cruelties, a city of dichotomies, wonders and new technologies, filled with larger-than-life characters. Simply put, it’s irresistible. I’ve been a licensed New York City tour guide sharing history for over a decade and I can promise you there’s never a dull moment in this city’s past.

Can you tell us a little bit about your main character, Eve, and her little group of mediums?

Eve Whitby’s family has been with me for a decade. I love them beyond measure. Each of my series stand alone, but readers who have followed me will greet familiar faces. Eve is perhaps the boldest, most no-nonsense heroine I’ve ever written. She has delightfully surprised me all along the way. Her three fellow mediums come from vastly different backgrounds and their found family dynamic is an ever-evolving treasure.

You explore a number of modern issues in THE SPECTRAL CITY. How do you blend the discussion of women’s roles in society and transgender issues into a historical background?

The fight for women’s equality blossomed in the 19th century as women began working in all kinds of new spaces. Movements that finally gained the vote in the 20th century were built decades prior. Victoria Woodhull ran for president with Frederick Douglass as her running mate 27 years before the setting of my book. The issues and biases Eve and Detective Horowitz confront were part and parcel of contemporary Victorian discourse.

LGBTQ+ folks have always existed, that’s no modern invention, though 19th century existence came with complications, biases, and legal issues. Oscar Wilde’s trial took place two years before my 1899 setting, so methods of hiding, passing, and code-switching for LGBTQ+ folk remained vital for safety. That’s why Eve understanding and welcoming Antonia is so important. While the vernacular of the time period was different than today, it would be inaccurate to exclude these identities from a city as historically diverse as NYC. The important part for me was presenting a trans character who simply exists, safely and helpfully, who isn’t a point of conflict or tragedy. For a wonderful window into 19th century LGBTQ+ life, please visit the Alice Austen house in Staten Island for a treasure trove of period photography and information.

What are some of the resources you use to ensure historical accuracy?

My go-to resources are guidebooks from the time period, catalogues, periodicals, maps, museums, articles and advertisements; the voice and images of the era. This time around, I was thrilled to obtain a book cataloguing Harry Houdini’s theatre bills, so I was able to recreate one of his exact escape advertisements.

Conversely, what kinds of liberties do you take with historical facts—especially in light of the paranormal aspects of your work?

The steepest veering off historical course is creating the Ghost Precinct itself. While there was no official department investigating things via paranormal aid, mediums, psychics, mesmerists, magicians, occult and mystical figures teemed this point in history. Every aspect my characters embody matches the obsessions and preoccupations of the era.

What’s next? Will we see more of Eve and the Ghost Precinct?

THE SPECTRAL CITY is set for at least a trilogy! And the fourth and final installment in my popular Strangely Beautiful saga, Miss Violet and the Great War, after years of trials and tribulations, will finally release with Tor Books February 2019. 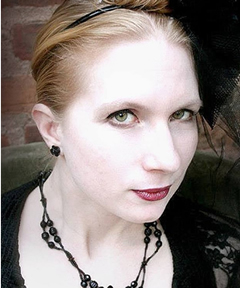 Actress, playwright and author Leanna Renee Hieber is the award-winning, bestselling author of Gothic Victorian Fantasy novels for adults and teens. Her Strangely Beautiful saga, beginning with The Strangely Beautiful Tale of Miss Percy Parker, hit Barnes & Noble and Borders Bestseller lists and garnered numerous regional genre awards, with new revised editions from Tor Books now available. Darker Still was named an American Bookseller’s Association “Indie Next List” pick, a Scholastic Book Club “Highly Recommended” title and a Daphne du Maurier award finalist. Her new Gaslamp Fantasy saga, The Eterna Files trilogy, is now available from Tor Books. Her short fiction has appeared in numerous anthologies such as Queen Victoria’s Book of Spells, Willful Impropriety, The Mammoth Book of Gaslamp Romance, featured on Tor.com and she writes for Criminal Element. Her new Gaslamp Fantasy series The Spectral City begins Nov. 2018 from Kensington Rebel Base. A four-time Prism Award winner for excellence in the genre of fantasy romance, Leanna’s books have been selected for national book club editions and translated into languages such as Complex Chinese, German and Polish. A proud member of performer unions Actors Equity and SAG-AFTRA, she lives in New York City, where she is a licensed ghost tour guide and has been featured in film and television on shows like Boardwalk Empire and Mysteries at the Museum.

She is represented by Paul Stevens of the Donald Maass agency and is active on Twitter @leannarenee and has resources and more information on her website.