Riley Sager on the
Anatomy of an Option Deal 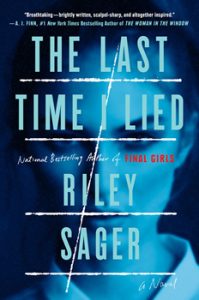 When Riley Sager put the finishing touches on his 2017 thriller Final Girls, it was clear to everyone who read it that the manuscript contained the bones of more than a novel. Largely inspired by Sager’s yearly ritual viewing of Halloween, his female-driven psychological thriller pays tribute to slasher films while eviscerating the tropes that define them. As the author puts it, “there was film DNA already in the book.”

Sager’s agent, Michelle Brower at Aevitas Creative Management, immediately saw the novel’s cinematic potential. Before the manuscript was even submitted to editors, Brower sent it to book-to-film agent Sean Daily, whose film and TV rights sales include 13 Reasons Why to Netflix and Joe Hill’s The Fireman to Fox. Daily made a few recommendations throughout the editing process—suggestions that Sager was free to use or decline as he saw fit, and the author says he did a little of both as he was readying the manuscript for potential publishers. When everyone was happy with the finished product, Brower and Daily went to work simultaneously to find Final Girls a home in print and on screen.

The publishing part, Sager remembers, was “shockingly fast,” with a book deal coming together only a couple of weeks after Final Girls went out on submission. The movie deal, though, took considerably longer. While trade journals are full of blurbs about books that are picked up by Hollywood before the ink is dry on the publishing contract, those stories are the exception rather than the rule. In Sager’s case, nearly two years passed between selling the manuscript to Dutton and optioning the book to Universal Studios.

As is often the case with book-to-film deals, the author had little involvement as negotiations churned along. Thanks to pre-publication buzz and strong sales, Final Girls sparked a bidding war among studios eager to adapt it; Sager’s only clue that any of that was happening, though, was a cryptic email from his agent: Things are happening. I’ll update you soon. The next day, Sager learned that his debut novel had been optioned by Universal and Anonymous Content, the production company behind True Detective and The Revenant.

“To this day, I don’t know who else was interested or what was going on behind the scenes,” Sager says. “I kind of prefer it that way. I knew they were trying to get a film or TV option, but I just thought it best to put it out of my mind. If it happens, hooray! If it doesn’t happen, it’s just not something I want to worry about or focus on.”

Selling the option, of course, is only the first step in a lengthy adaptation process, and Sager is the first to acknowledge that there’s no guarantee Final Girls will ever make it to the screen. For every book that navigates the path from option to production, there are dozens more that languish in “development hell” until the option expires—often somewhere between 12 and 24 months, at which time the studio can choose to renew the option if they’d like to keep working on the project. It’s a notoriously tough process for authors, who often have little involvement as the script is written, talent is brought on board, and countless creative decisions are made. 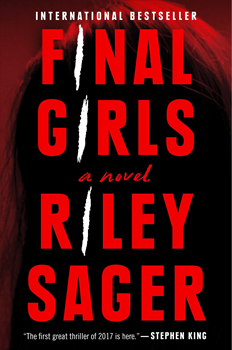 “They’re updating me about the progress, but I don’t have any input,” Sager says. “And again, I wanted it that way. I love movies, but I also know that a book and a movie are two separate beasts, and I wouldn’t know the first thing about adapting it. For Final Girls, my whole mindset has been, I wish them well, I’m here if they need anything or if they have any questions, but I’ll let the professionals handle it. … If a Final Girls movie gets made, I can’t wait to see it. If it doesn’t, I understand because developing movies is very difficult, and it has to go through so many hoops to get to a movie screen.”

A television screen, though, might be a different story, at least when it comes to an author’s creative input. Less than a year after Universal finalized its deal to option Final Girls, Sager’s second novel, The Last Time I Lied, was garnering interest in an increasingly author-friendly television market. This time, with a bestseller under his belt, the process happened much faster—and, for Sager, completely out of the blue.

“Again, I got the sudden email from my agent saying, things are happening,” Sager says. “That one really shocked me because I never considered The Last Time I Lied being optioned or adapted. For some reason the plot didn’t strike me as something that was adaptable. It was the furthest thing from my mind. And this was about two months before the book was released, even. I was taken by surprise. I get the email saying something’s happening, and then the next day I was talking to two different networks.”

This time around, Sager was much more involved in the process. He spoke with representatives from Amazon Studios, which has scored recent hits with The Marvelous Mrs. Maisel and Tom Clancy’s Jack Ryan, and another, more traditional TV network about what possibilities the book might hold for a limited series—including how the story could continue into a second season if the first is successful. Rights ultimately went to Amazon, which has enlisted Sager as a creative consultant.

“At first I was intimidated by that,” Sager admits. “I saw that in the contract and thought, what does this mean exactly? It made me nervous. So Sean explained to me— you can be as involved as little or as much as you want to be. If it does go to a second season, I have some ideas about where I think the plot could go. And that, to me, is exciting.”

It should be exciting for other authors too, as the growth of streaming services drives more producers to bookstores and backlists to seek out new material. With Apple and Disney both set to unveil their own streaming platforms next year, the stage is set for a production boom that could benefit new and established authors alike.

“I think it’s a very good time for authors,” Sager says. “It’s pretty clear now that these streaming services are where entertainment is heading, and I think producers and production companies want a known quantity—something that survived already and has proven that it works in a different medium—and that’s why the first thing they go to are books.”

The December 2018 Edition of The Big Thrill

Between The Lines: David Baldacci by Josie Brown