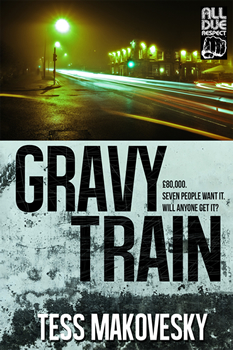 When asked to do an interview for The Big Thrill, I always say yes. Typically, I get a copy of the book, find a comfy place to read, and break out my notebook. While reading Tess Makovesky’s GRAVY TRAIN, I had so much fun, I never took a single note—that’s never happened to me before.

The story centers on Sandra, a barmaid who learns details of a betting scam that nets her and her husband a cool 80 thousand pounds. Crime pays, it would seem. Except they don’t anticipate the mugger waiting for them outside the betting shop, or the chaos that ensues.

Since Makovesky resides on the other side “of the pond,” our conversation about GRAVY TRAIN was conducted over the Internet—even that was fun, as you’ll see in the below interview.

One of the most interesting things about GRAVY TRAIN is how all of Sandra’s scenes—and only hers—are in the present tense. What led to that choice?

It just seemed to work out like that. I wanted to do chapters from several different characters’ points of view and was looking for ways to make them sound different enough that the readers could tell pretty much who was “talking” in each chapter. For example, crime boss Ball is a bit prissy, Todd-the-chauffeur swears a lot. It just seemed to happen that Sandra’s chapters ended up in present tense. Given that in many ways she’s the main character in GRAVY TRAIN, it adds to the immediacy of her scenes.

It’s something I used sparingly in my previous book, Raise the Blade, and that gave me the courage to try it in slightly longer passages here.

All the characters in GRAVY TRAIN get their own scenes and most of them are pretty short. Talk a bit about how that worked for the pace you were looking for.

I’ve always specialized in short stories, but thanks to a short sharp talk from some of my writer friends, I was persuaded to have a go at a full-length novel. I repeated the style I first tried in Raise the Blade, which was to make each chapter almost like a short story in its own right, with its own character(s), its own story arc, and quite often, its own cliff-hanger ending.

It’s a great approach for me because it means I can construct a book from the elements I understand, and it works well with a fast-paced action narrative. There’s so little padding to slow the action down. When I’m alternating scenes between various different characters, there’s less space before the characters reappear again, less chance of readers getting annoyed or bored.

There’s a sense of optimism that each of your characters has. For a bunch of folks who work “off the radar,” that’s kind of rare in crime fiction. Why are they so positive about the future? Are you?

That’s an interesting observation and not one I’d noticed myself! I’d say they’re not necessarily optimistic about the future so much as desperate about the present. If you hate your job or your situation or your home life or you’re always short of money or you’re being bullied, then the future is always going to look rosier than wherever you are now.

Take Sandra in GRAVY TRAIN. She’s stuck in a dead-end pub in the wrong part of town—Birmingham, England—with a no-hope husband who eats her out of house and home and goes off to play poker with his mates while leaving her to cope. I can imagine that, along with the sore feet and work-roughened hands, she’d have a fairly negative attitude to her own status quo, and spend all her time looking forward to better and brighter things. Likewise Justine, the car thief who first appeared in my short story “Wheel Man.” Thanks to a misogynist boss, she’s lost her livelihood and the love of her life, and can’t help hoping for better things ahead. Pretty much the only character who isn’t optimistic is Todd. He’s skating rapidly down a slippery slope, having agreed to rat out his gangland boss, and spends more of his time looking back over his shoulder than ahead to the sunlit uplands of a future life.

Whether the future works out better for any of them in the end is another matter altogether, of course—this is noir, after all. I do try to be slightly ethical about it, so that people end up in some way with the luck, karma, or fate that they deserve.

I probably don’t look forward to the future to that extent—but then I’m a lot luckier than most of the characters I write about. After all, I already have what I most wanted: I write books for a living.

You mix humor and drama very well throughout the book. Please talk about the plusses and minuses of that.

I’m going to cop out slightly on this because it seems to be my natural style. I struggle to write anything that doesn’t have a strand of dark (or even warped) humor running through it. GRAVY TRAIN is a crime-based romp—the sort of thing the French would call comédie noir—so I was able to pack it with amusing, wry or ironic incidents. I had a blast writing it for that very reason.

There is a danger, of course, that I could be seen to be trivializing the very dark aspects of human nature I’m writing about. I always try to make sure the humor isn’t in bad taste and I feel that both books would have been very bleak without it.

I get the impression from watching U.S. crime-based TV and film imports that American readers prefer their drama and/or characters to be more black and white. British readers are happier with shades of gray. (Not that sort of Shades of Grey, before anyone says it!) A crime is still a crime however you write about it, so there are lots of similarities, too. Both cultures seem to love crime with a healthy dose of gallows humor. Although I can’t point to relevant books, I can illustrate this with movies—U.S. classics like Midnight Run and Grosse Pointe Blank, for instance, or their British counterparts, The Italian Job or Shallow Grave.

And I’m still not convinced I write “crime”—at least, not the current understanding of that term which seems to focus mostly on murder mysteries of one sort or another. My work is about people rather than murders: stupid people, naive people, greedy people, people who get sucked into crime or who get themselves into sticky situations and turn to crime as a solution. It probably best fits into a sub-genre known over here as “Brit Grit”—a sort of low-life, kitchen-sink, warts-and-all, gallows humor mash-up that’s breathless, dark, grainy, and gritty, but often wryly amusing and sometimes hilarious. It’s bubbled under the surface for over a decade now, ably supported by such publishers as Byker Books, Out of the Gutter, and Near to the Knuckle. Several writers have emerged from that cult underground status to write for the mainstream, including Jay Stringer and Paul D. Brazill.

Tell me a bit about your experience working with All Due Respect, an imprint of the indie publisher, Down & Out.

I’d heard some good things about Down & Out over the years and was over the moon when they accepted GRAVY TRAIN. ADR specializes in what they call “low-life literature,” which pretty much sums up what I write, so it seems like a good fit.

All the guys at both ADR and Down & Out have been enormously supportive. GRAVY TRAIN needed a fair bit of work to bring it up to house style and they could simply have imposed solutions from above. However, they were happy to let me work things out in my own style and voice, and to give me plenty of time to do it.

ADR is small enough that authors get direct input on the editing process, cover art etc., but being closely affiliated to Down & Out gives them access to the support, networking, and resources of a larger organization, so it’s like the best of both worlds.

Finally, if you had the chance to moderate a panel at ThrillerFest, who would you want on the panel and what would be the topic?

I suck at questions like this. However, I think I might choose a random selection of representatives from publishing and ask why so little noir gets published these days.

I get that the bigger publishers need to keep one eye on commercial aspects, but you only have to look at noir movies to see how popular they are on both sides of the pond. The recent success of TV series such as Brotherhood and the wonderful Get Shorty shows that the genre translates well to the small screen, too. Yet with the exception of a handful of indie publishers like ADR/Down & Out, almost nobody seems to be putting out noir books. I’d like to know why, and whether they (publishers) know what a wonderful opportunity they’re missing. 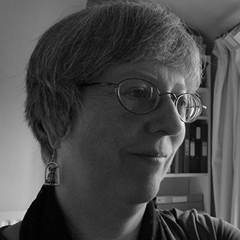 Liverpool lass Tess is now settled in the far north of England where she roams the fells with a brolly, dreaming up new stories and startling the occasional sheep. Her short stories have darkened the pages of many anthologies and magazines (including Drag Noir from Fox Spirit Books and Skin & Bones from Down & Out Books), and her psychological noir novella Raise the Blade was published by Caffeine Nights in 2016. Gravy Train is her first novel.