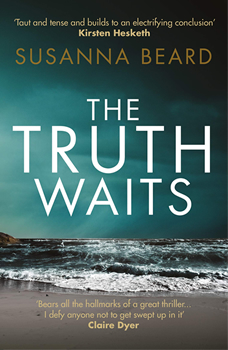 “On a strip of sand by a northern sea, salt water caresses pale skin.”

British businesswoman Anna Dent encounters a young girl’s body on a Lithuanian beach and can’t let the horrific image go. When a volcanic eruption in Iceland grounds all European flights, Anna meets a man, Will, who will change her life. She is soon sucked into a Baltic quagmire of sex trafficking and Russian mobsters. To unravel what happened, she and Will must use all their skills—but not even he can save her from the secrets of her past that the child’s murder resurrects.

THE TRUTH WAITS is Susanna Beard’s second book. Her first, Dare to Remember, was published in 2017.

Beard spent time with The Big Thrill this month to share more about the inspiration for her latest release:

What inspired you to write fiction in general, and psychological thrillers in particular?

Working with PR clients always involves writing this piece of copy about that subject. As a novelist, I discovered the wonder and freedom of using my imagination in my work. The psychological thriller bit was by complete chance—my first novel was simply a story I wanted to tell. Then I realized that this was my niche and carried on.

How did you prepare to write novels?

Since I was a teenager, I’ve wanted to write a novel. At the point where I felt ready to take the plunge, I enrolled in a creative writing course, then another, and another. I was hooked! The last course covered a period of six months, and with about twelve other would-be writers, I learned about character, plot, narrative voice, setting, and all the other fascinating elements that go together to create a novel. By the end of the course I’d finished my first book.

I also devoured as many books as I could. You can’t underestimate the value of reading other people’s work—it’s inspiring, illuminating, often humbling, and so important.

What you must do is start writing. Then you need to keep going, practicing, writing, editing, and rewriting. One day, when you’ve poured your heart and soul into it, somebody will want to read what you’ve written.

Tell us about how your writing process changed between your debut, Dare to Remember, and THE TRUTH WAITS.

Dare to Remember evolved from the nugget of an idea—a woman who walked for therapy—and eventually turned into a psychological thriller. I didn’t know if it was a good idea or not. I was out there in the wilderness, as a new writer, so a lot of thinking went into it before I started the actual writing.

THE TRUTH WAITS was a much harder process. It was like wrestling with an octopus—as soon as I sorted out one sticky tentacle, another would wind itself around my neck and start to squeeze. I learned a lot! I’m now a planner, not obsessively, and not every scene—those come along as the story unfolds—but I plan the arc of the story and the characters’ biographies in depth, in advance.

After I envisioned a body on a beach, I looked at my main character, Anna, and thought—why was she on that beach, what was her life like, and what might she do next? Really, it was all about Anna; the fact that she finds a body on a beach leads to her finding out much more about herself.

The story begins with Anna as a dedicated, but somewhat enigmatic, career woman. How did you envision her secrets playing into the story?

When I started to write, I didn’t know what they would be, or how they would emerge. That’s what’s so interesting about writing fiction; often your characters develop in their own way as you go along. I wanted Anna to be strong and happy—but to realize in the end, she also needed people—specifically, family—in order to be fulfilled. She needed to trust them with her inner secrets and to know that it would be okay.

How do you handle sudden bursts of inspiration that may lead you in a new direction?

Sudden bursts of inspiration are always welcome! If they truly are inspired, it’s because they fit perfectly into the story. If I have an idea that’s a bit left-field, but I like it, I let it sit there for a bit and “test” it in my head to see if I can make it work. If I can’t, I’ll save it for later, or for another story. I don’t stick to my plan religiously; I go with the flow and what the characters tell me will happen.

Did you know the twists and the ending before you started writing, or did they come to you as you progressed through the story?

The plot twists came to me as I went along, which meant a lot of editing. I had a few different endings before I found the right one.

What inspired you to set the opening of the story in Lithuania?

I’d been playing with the idea of people being thrown together because of the grounding of aircraft after the volcanic eruption in Iceland in 2010. My sister was stranded in Sicily, which was the original setting for my book—but I decided it was too beautiful and sunny. I needed somewhere a little threatening, mysterious, to create the right setting for a dark thriller.

My main character, Anna, told me where to go. She is a businesswoman selling textile products online, and the one thing I knew about Lithuania was that it was strong in textile production. So I looked at a map and saw that it had the most stunning sandy spit on the Baltic coast. I had my setting.

I read about the country online and visited the Lithuanian Embassy in London, where an attaché was extremely helpful. Then I went to Lithuania for a few days. I walked along the beach on the Kuronian Spit, traveled across the country by train to Vilnius, took photos and notes, absorbed the atmosphere, and talked to local people.

The beach was exactly what I’d hoped for—long, and empty, with a dark horizon and very few people. Also, Lithuania borders on Russia, implying all the mystery and threat that we associate with thrillers and spy stories. Belarus, next door, is also not well known in the U.K. My research showed that organized crime and police corruption are not unknown in those countries, so they were perfect for my story.

It’s the detail that’s important in making a story authentic, and in the case of Lithuania, I brought in details like the stork nests, the architecture of Vilnius and the bleak windy beach on the Baltic Sea.

How did your main theme make itself known?

The truth, of course, is the underlying theme. I ask the question: is it better to tell the truth, however shocking, to the people you love—and trust that they will still love you — or hide it away and always feel guilty for holding back? Will the truth out? And what happens if you try to hide it?

Also, I had wanted to write about an older woman and a younger man for a while, not as the main focus, but as a part of the story, because it may be frowned upon much more than the older man/younger woman relationship.

THE TRUTH WAITS also explores guilt, in particular women’s guilt about their life choices — choosing career over family, for example. The reason Anna doesn’t tell Will everything when she gets together with him is all about her guilty feelings.

Did you set out to write a story about human trafficking, or did that theme become apparent as the story unfolded?

Human trafficking soon came to mind because of the death of a young girl in mysterious circumstances. On a trek in Nepal (as you do) I met a young woman from Moldova, who told us that trafficking of girls is endemic in her country and surrounding areas, so I knew it would provide an authentic theme to my novel. Online research confirms that trafficking in general is a real issue, often from Russia through eastern Europe and into the west, and I got the impression that it’s probably a worse problem than anyone here would know.

What would you like your readers to take away from THE TRUTH WAITS?

A somewhat lofty wish, I suppose: I’d like them to think about the truth. For instance, is it best to tell the truth at all times? If you hide the truth, what will happen? Are there times when it’s better not to reveal the truth? And: will the truth always come out? 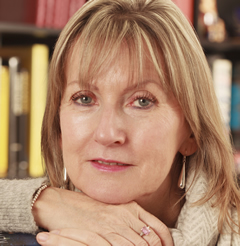 Susanna is fascinated by human relationships. She can be found people-watching wherever she goes, finding material for her writing. Despite the writer’s life, she has an adventurous streak and has swum with whale sharks in Australia, fallen down a crevasse in the French Alps and walked through the sewers of Brighton – not in that order.

Her passions include animals — particularly her dogs — walking in the countryside and tennis, which clears her brain of pretty much everything.

Susanna’s debut novel, Dare to Remember, was published in February 2017 . She aims to keep writing, and never to get old.