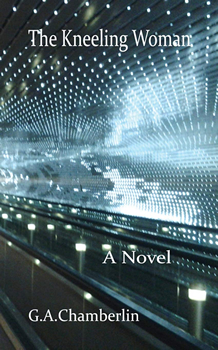 THE KNEELING WOMAN, the latest international suspense thriller in the Amanda Wells series written by G. A. Chamberlin, opens with a bang. Literally.

While browsing through a souvenir shop not far from Puerta del Puenta—the Renaissance gate in Cordoba, Andalusia—Amanda Wells is smitten with a beautiful white granite carving of a “saintly figure, its curvature smooth, its head bowed in merciful supplication with hair locks weaved about her head.”

It’s too beautiful and too good a deal to pass up, and so she buys it. But as soon as she and her husband, Trevor MacDonnell, step out onto the street, a vehicle streaks by and gunshots tear into Trevor’s body as he stretches out his arms in an effort to protect his wife from the hail of bullets.

And suddenly, we’re off and running, as THE KNEELING WOMAN seesaws back and forth between present time and the early days of World War II. It seems the provenance of the statue Amanda innocently purchases, and donates to a city museum, has a shady past, and it’s this past that winds up getting her husband’s firm investigated for dealing in stolen assets.

Research for THE KNEELING WOMAN was rooted in findings from Chamberlin’s previous work in the field of records and documents. As she explains, “The novel, framed by World War II, shows the conflicted world that Roosevelt had to face as he shaped the world of his time, and especially illustrates the perils that can arise if we don’t care about what’s important. Evil can lurk anywhere—including in the opioid epidemic of today—if allowed to take root. The novel is less about the treachery of war than about dangers that were averted and the victories sustained for our safeguard today.”

THE KNEELING WOMAN, the ninth in Chamberlin’s suspense series, saw its birth as a direct result of her attending ThrillerFest 2011.

“It began with Cultural Attache,” she says, “and as my thrillers took shape, my impulse was to inform the reader about historical events, which has always been my currency. In this case, it’s antiquities and fraud, and the heroine’s academic integrity not only in challenging the authenticity of a classic work, but also peeking into the world it came from.”

Chamberlin’s series revolves around Amanda Wells. “In the beginning, she is a very junior staffer serving overseas in government. In the first book, The Handmaiden Legacy, Amanda calls in a false alarm, only to discover that she does have a real cause, and a rescue adventure ensues.”

In the novels that follow, Wells deals with current affairs in areas of conflict and tension. Or, as Roseanne Roseannadanna liked to say, “It’s always something.”

In Somma, Wells is transporting a priceless document through Europe with her young children; in Unintended Consequence, she is looking at a potential terrorist attack in Washington, D.C., in the midst of an environmental nightmare; in Outbound, it’s internal corruption and misplaced trust by financial fraud; in Rare Earth Element it’s corruption of humanitarian aid in a world of space age technology; and, in Particle, it’s a  technology attack in an environment of unemployment and displacement.

Wells’s profile, according to Chamberlin, “is that she’s safely married to a banker, yet exposed to realities that seem incongruous, and so she must rely on her sensibilities to solve mysteries, often at great risk to her professional integrity and her own uncertainty.”

G. A. (the G is for Gloria) Chamberlin’s background is at least as interesting as the character she has created. She is British-born and was educated in the U.K., with advanced degrees in management, history, and eventually publishing from several universities in the Washington, D.C., area. Following a two-year posting in India, where she worked in the Telegraph Section of the British High Commission as a trainee-typist, she came to Washington, D.C., in the 1970s with her family, while serving in the British Foreign Service where, she says, “It was a great place to be a young working woman among the diplomatic staffs of the nation’s capital.”

It was in D.C. where she met her husband, John, who worked in the defense industry. They settled in Maryland and have two grown children. Now retired, they enjoy travel, sailing on the Chesapeake Bay, and “pursuing interests in new venture ways, including a research firm based in Washington.”

A byproduct of this entrepreneurial spirit is an imprint, Crown Eagle Publishing, that she and her husband established. One of the first books they produced was a monograph she authored about Kathleen Harriman, daughter of Averell Harriman, who documented her travels with her father as Roosevelt’s Special Envoy to Britain and Russia during World War II.

Chamberlin has very strong opinions about the publishing business today and especially about the place of self-publishing, or the small, independent publisher.

“Publishing is a unique industry,” she says, “quite complex and constantly changing. It is costly as a business, but it can be lucrative. For authors needing to continue work and cultivate their skill by offering something of added value, independent publishing is an option with endless opportunities in both digital and print.”

Though her choice to publish her own books was not taken lightly.

“Our decision to use our in-house publishing platform reflects innovation in the digital and media commerce of today,” she says. “Of course, independent publishing has no pre-existing global market-reach or client base, something I would truly like to achieve. But the standards for content creation remain high, and intensely necessary. Further, it offers full rights of ownership under U.S. copyright protections.”

Many writers today are frustrated by the process, which seems to take longer and longer, and the results less and less satisfying. As a result, many look to people like Chamberlin to see how successful their experience is, to see if they can duplicate it, or at least to see what they can learn from it.

When asked what she thinks it takes to be an author today, Chamberlin doesn’t hesitate with an answer. “Skill, professional care and polish. Today’s writer must be well-informed and tech savvy. But above all, they must possess a big heart.”

G. A. Chamberlin is the author of the Amanda Wells Series of thrillers under the imprint Crown Eagle Publishing. Her latest, The Kneeling Woman, is her ninth in the series. She is an indie-published author under the imprint, where she also wrote one non-fiction title, Kathleen The War Years — a scholarly account of U.S. overseas diplomacy during WWII.