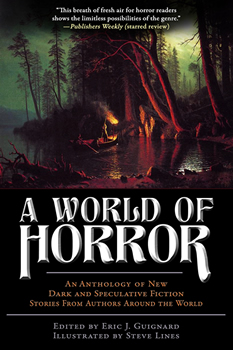 Every nation of the globe has unique tales to tell, whispers that settle in through the land, creatures or superstitions that enliven the night, but rarely do readers get to experience such a diversity of these voices in one place as in A WORLD OF HORROR, the latest anthology book created by award-winning editor Eric J. Guignard, and beautifully illustrated by artist Steve Lines.

Enclosed within its pages are 22 all-new dark and speculative fiction stories written by authors from around the world that explore the myths and monsters, fables and fears of their homelands.

Encounter the haunting things that stalk those radioactive forests outside Chernobyl in Ukraine; sample the curious dishes one may eat in Canada; beware the veldt monster that mirrors yourself in Uganda; or simply battle mountain trolls alongside Alfred Nobel in Sweden. These stories and more are found within A WORLD OF HORROR.

Enter and discover, truly, there’s no place on the planet devoid of frights, thrills, and wondrous imagination!

The Big Thrill caught up with author and editor Eric. J. Guignard to discuss his latest anthology, A WORLD OF HORROR:

It’s important for readers from all walks of life to see characters like themselves, to understand there are others experiencing comparable feelings, leading lives as they do, acting as they do, even in fictional worlds of horror and fantasy. And it’s important for readers to see characters unlike themselves, to provide exposure to cultures and traditions that are unfamiliar, to increase understanding of priorities, struggles, and perspectives. Ultimately, bringing together writers of different backgrounds leads to a richer reading experience, one that can stimulate and inspire us with new ideas, can provide normalcy to concepts we might find strange solely due to their unfamiliarity.

This is an exploration of dark fiction tales across the globe that showcases unique and diverse lifestyles, mythologies, and fears and thrills!

The stories in this book are not horror of a visceral, gory nature but rather quiet, thoughtful pieces exploring characters’ lives who generally come in contact with some dark, supernatural element. Ghosts and regrets, death and creeping monsters are often the same in any case: a dread that settles over a character (or yourself!) and must be resolved by confronting or escaping it. But these stories too are mystery, they are thriller, they are weird, funny, bright, telling, and tragic—they are life in all its resplendent diversity . . . which, for all intents, is what this anthology is all about. 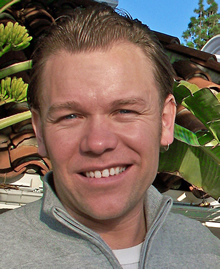 Eric. J. Guignard is a writer and editor of dark and speculative fiction, operating from the shadowy outskirts of Los Angeles, where he also runs the small press, Dark Moon Books. He’s won the Bram Stoker Award, been a finalist for the International Thriller Writers Award, and a multi-nominee of the Pushcart Prize.

His stories and non-fiction have appeared in over one hundred genre and literary publications such as Nightmare Magazine, Black Static, Shock Totem, Buzzy Magazine, and Dark Discoveries Magazine. As editor, Eric’s published six anthologies including (amongst others) Dark Tales of Lost Civilizations, After Death… and Pop the Clutch: Thrilling Tales of Rockabilly, Monsters, and Hot Rod Horror (due out November, 2018).

Read his short story collection, That Which Grows Wild: 16 Tales of Dark Fiction (Cemetery Dance Publications), his standalone novella, Baggage of Eternal Night (Journalstone), and watch for his first novel, Crossbuck ‘Bo, which is currently being shopped around.