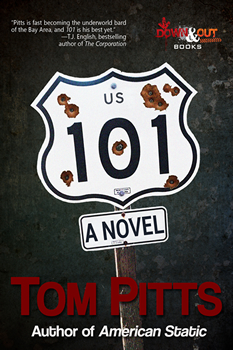 On the cusp of pot legalization in California, Jerry runs afoul of some San Francisco bikers in the marijuana game. He flees straight up Highway 101 to Humboldt County to hide out deep in the hills at Vic’s, a reclusive pot farmer and old pal of his tough-as-nails mother. But trouble finds Jerry no matter where he goes and soon the bikers, a pair of stone killers, and a Russian weed tycoon named Vlad the Inhaler are all hot on Jerry’s trail.

Fallout from the unfolding chaos piques the interest of SFPD detective Roland Mackie when he learns Jerry’s host, Vic, is somehow involved. It opens a twenty-year-old wound, an unsolved case called the Fulton Street Massacre, and Mackie is willing to do whatever it takes to get a pair of cuffs on the elusive Vic.

When Jerry and his protectors are chased off the mountain and back down the 101 to an inevitable showdown back in the Bay, he learns Vic is much more than his host, he’s a mentor, his mother’s hero, and the toughest man he’s ever met.

With an unforgettable cast of characters and an action-packed plot, 101 is a wild ride through Northern California’s “emerald triangle.”

The Big Thrill caught up with author Tom Pitts to discuss his latest novel, 101:

A fast-moving thriller that’s both funny and edgy. I hope readers will view the action through the lens of the criminals with a sense of authenticity. It’s always been my goal to provide a realistic depiction of what motivates a criminal.

It pushes the boundaries of crosscut POVs. The rotating POVs mixed with the third person narrative gives the action a visual, film-like quality. It’s something I’ve tried to push with each release and I feel like I’ve finally reached the crosscut panacea that pushes the pace in the way I’ve envisioned. It took a few novels to realize that this was what I was trying to inject into the genre. I’d grown tired of first-person, and often third-person seemed like the narration wasn’t flexible enough. I try to make the third-person voice bend just a little to lend to the POV of each character.

Surprised? The favored bike for outlaw bikers is the police edition from Harley Davidson. I got that tidbit from a Hells Angel prospect. Odd choice for an outlaw, I figured. But as far as an education is concerned, I did more research on this book than any other. My oldest son was actually living and working on a pot farm in Humboldt County and I visited and learned the nitty gritty of the life. Aside from back-breaking labor, I discovered things like how water is like currency to a grower, how to clone plants, process and package certain strains, and how to trick crops with false sunlight, etc. There’s a lot more science going on than I realized.

Although it’s set against the backdrop of bikers, growers, and gangsters in Northern California, the relationship between the F.B.I. agent and the S.F.P.D. officer is what really drove the story forward for me. I mostly write about criminals on the bottom rung, but the story never really kicks in for me until there’s a cop in the mix.

That’s an answer that’s shifted throughout my life depending on what I’m reading and what I’m aspiring to write. There were guys whose lives influenced me to become a writer—the Hemingways, the Kerouacs—but I came to learn were in no way connected with my craft, with what I wanted to achieve. If I had to be pinned down, I’d go for my ol’ standbys: Denis Johnson for his flexible voice, Benjamin Whitmer for style, and Elmore Leonard for his work ethic. Different writers influence you for different reasons though. Cormac McCarthy made me realize I’d never be as good as him, so I shouldn’t try. That was somehow freeing for me as a writer. It’s easy to say “create, don’t emulate,” but there’s value in all you do, as long as you’re working. You never know what small seed you take from what you read, but the only way to grow is to keep on taking in new and varied books. 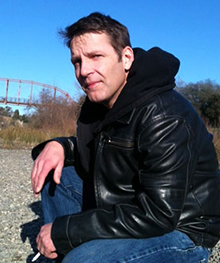 Tom Pitts received his education on the streets of San Francisco. He remains there, working, writing, and trying to survive. He is the author of American Static, Hustle, and the novellas Piggyback and Knuckleball.