TALES FROM THE SCRIPT:

[Welcome to The Big Thrill’s newest column, Tales from the Script. In each installment, we’ll take an in-depth look at the book-to-screen adaptation process, from the perspective of the author. Plus, we’ll dish on some book-to-film news at the end of each article. We’re excited to kick off the series with kidlit legend R. L. Stine about the Goosebumps series’ long road to the multiplex.]

It’s hard to imagine the world of children’s literature without R. L. Stine. He might not have invented kids’ horror, but he certainly defined it for an entire generation and then some. In late 1996—four years after the first Goosebumps title, Welcome to Dead House, was published—the series was racking up an incredible 4.5 million book sales per month, with as many as 40 product licenses churning out toys, television shows, audio books, apparel, and more. After 26 years, several spinoffs, and 400 million copies sold, Stine is still writing new Goosebumps novels.

But for all the series’ success in other mediums, a big-screen adaptation proved elusive for decades. Stine saw 23 years pass between Hollywood’s first attempt at a Goosebumps film and the premiere of the Jack Black vehicle that finally hit screens in 2015—a period marked by false starts, personnel changes, and well over a dozen rejected scripts.

The process was so protracted, in fact, that Stine says he mostly forgot it was happening.

“Very early, when Goosebumps was at its height, we had a deal with Fox to do a film that Tim Burton was supposed to produce,” Stine says. “We had a meeting with him, but nothing came of it. And then I just sort of forgot the whole thing for the next 20 years. I’m here writing books; I’m not thinking about movies.” 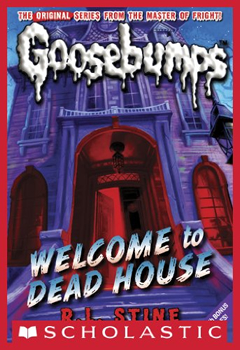 The problem with a Goosebumps film wasn’t the one that typically plagues big-screen book adaptations. No one had to be sold on the property’s box-office potential; it’s the second bestselling book series of all time, topped only by Harry Potter. Back when Fox was still trying to sort out its feature version in the ’90s, Goosebumps logged more than 32 million book sales in a single year, with its licensed apparel line hauling in an additional $40 million. In 1996, Taco Bell moved six million Goosebumps toys in roughly one month during a Kids Meal promotion; Frito Lay stuffed 32 million copies of the Goosebumps Thrillogy mini-books into chips bags as premiums. By any standard, Goosebumps was a cultural phenomenon, and its reign stretched from bookstores to supermarkets to the TV Guide.

What kept Goosebumps off the multiplex marquee, it turns out, was more of a creative challenge than a financial one. Stine’s compact, easily digestible installments lent themselves beautifully to the episodic TV market, but studios feared they were too slim for a 90-minute, big-budget adaptation. On top of that, the sheer volume of titles was daunting: with 62 books in the original series, producers and screenwriters couldn’t decide which story—or, to put a finer point on it, which monster—should get the feature treatment.

The answer, it turns out, was why choose one?

“It came back with Sony/Columbia, and somebody—I don’t know who—had the idea to make me a character in the film,” Stine says. “After that, they started getting scripts they liked, and it worked out. The script they used for the [first] movie was the 17th script. I’d kill myself. I couldn’t work like that. 17 versions? It’s horrible.”

Stine, a former comedy writer whose books feature a kid-friendly blend of horror and humor, is joking—mostly. But he’s careful to keep a healthy distance between his work as an author and the screen adaptations based on his books.

“I don’t get too involved in any of it,” he admits. “I just write the books. It didn’t make me change the books in any way—I think that would be a big mistake. I just try to write good books and don’t really think about [adaptability].” 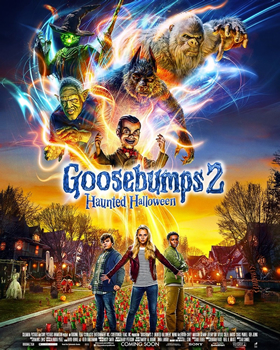 In fact, Stine says he had little input in the two Goosebumps movies that have been produced so far. When it comes to the features, the series’ interests are mostly represented by Stine’s wife, Jane—his longtime editor and a principal of Parachute Press, the company that launched Goosebumps in 1992.

“They handle all the TV and movie stuff for me,” Stine says. “They kind of keep me out of it. You wanna know my whole contribution to the first movie? I got them to remove two Stephen King jokes. That was it—that was my whole input for the film.”

Stine isn’t permitted to say much about “Goosebumps 2: Haunted Halloween,” opening nationwide on October 12. The sequel, which finds Slappy the dummy trying to usher in a “Halloween apocalypse” by bringing holiday decorations to malevolent life, features a new cast, including Wendi McLendon-Covey (TV’s The Goldbergs) and Madison Iseman (Jumanji: Welcome to the Jungle). Jack Black is widely expected to reprise his role as a fictionalized version of Stine, but the author isn’t at liberty to confirm. 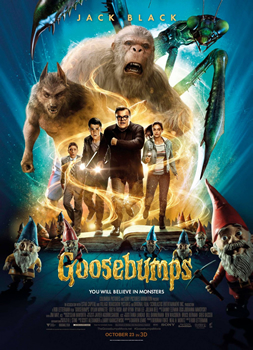 Both Goosebumps films have met with Stine’s approval, and he says he’s been lucky with adaptations of his work over the years—a sentiment that might come as a relief to writers who’ve read too many adaptation horror stories. Stine also points out an invaluable benefit of screen adaptations (especially from the kidlit realm) that’s often overlooked.

“Television and movies really sells books,” he says. “People say, ‘Oh, television’s bad for kids.’ But television is a great force for getting kids to read. When the Goosebumps TV show went on the air on Fox Kids, we started selling a million more copies a month. And when the Goosebumps movie came out, that Christmas, Goosebumps book sales tripled.”

Even though Stine admits it’s getting harder to come up with ideas for new installments, the Goosebumps films have breathed new life into his 26-year-old franchise. He’s just signed on for six more—though with a notable twist inspired by the success of the movies.

“Slappy is so popular from the movie that the series is now called Goosebumps: SlappyWorld,” he says. “Every other book has to be a Slappy book, though it’s kind of hard to write about a dummy that comes to life over and over again. I think I’ve done twelve of them so far. But kids always come [to library events] as Slappy, and I cannot tell you on Halloween how many kids go out as Slappy. It’s kind of wonderful.”

The success of Sony’s Goosebumps films also bodes well for another potential wave of Stine adaptations: Fox is developing three Fear Street movies based on the author’s recently revived young adult horror series. (Stine says the studio hopes to release the films in three consecutive summer months, potentially with R ratings—a move that would put them out of reach for most of the books’ intended readers, but might stoke the interest of adult horror fans who cut their teeth on the series years ago.) Stine is also writing several graphic novels for BOOM! Studios, which will be released through the company’s middle-grade imprint, KaBOOM!, beginning in fall 2019.

As for the decades it took to usher Goosebumps to the big screen, Stine says the long runway worked in the films’ favor, essentially ensuring two audiences rather than one.

“When the first movie finally came out, all the original Goosebumps readers from the ’90s came for nostalgia, and they brought their kids,” Stine says. “So it worked out perfectly. That’s why we had a number one film—because we had these two audiences.”

And anyway, Stine points out that other writers have fared worse when it comes to seeing their work progress to the big screen.

“You know, when Maurice Sendak wrote Where the Wild Things Are, he was in his thirties,” Stine says. “When the movie came out, he was 80. He had to wait 50 years, so 23 isn’t bad.”

Got ITW member adaptation news you’d like to submit for possible coverage in The Big Thrill? Email me at april@thrillerwriters.org.