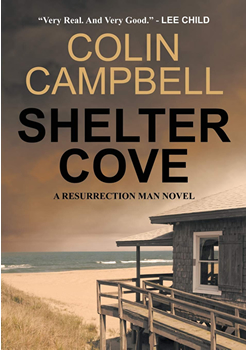 Colin Campbell is a Brit with a British hero who has reinvented himself in U.S. law enforcement. Nothing like a long-time British cop writing about a British cop, solving crimes in America, no less.

Campbell took some out of his busy schedule to talk to The Big Thrill about the latest in his Resurrection Man series, SHELTER COVE.

Please tell us what SHELTER COVE is about.

Jim Grant is at it again. Knee deep in shit and shit deep in someone else’s past. So far so normal. Except this time it’s personal, and that’s why the past stings so much.

Trouble comes in threes.  Always has and always will.  If Cole Thornton had recognized that, he might have avoided much of what was to come. If he’d realized that the car crash was the start of his personal trifecta, he could have moved on before Shelter Cove became a killing jar instead of a safe haven. Before the bodies on the beach and the shootings. And before Jim Grant came looking for him.

That’s pretty much the “no spoiler” description. I’m trying not to say who Cole Thornton is or why Jim Grant is looking for him. And I don’t want to say too much about why the car crash is tied into all the other stuff that happens, or what that other stuff is. Some of it came as a surprise to me.

SHELTER COVE is book #6 in the Resurrection Man series. Can you explain that resurrection concept and its importance in these books?

Giving the series a name came from Midnight Ink, who published the first four books. I initially had Jamaica Plain as A Jim Grant Novel. They decided on A Resurrection Man novel, based on the events of that first book. Basically, Jim Grant is hospitalized so many times, and caught on camera by TV news holding his arms out like Jesus on the cross to show he’s unarmed, that the press, in the book, dubbed him The Resurrection Man. He just takes a few knocks. And the knocks kept coming in the rest of the series until the name stuck. Believe me, being a celebrity isn’t something a cop wants. He just wants to do the job and go home after the shift.

The title SHELTER COVE evokes safety and calm, which your story is anything but. Did you choose the title for contrast, and what drew you to this setting?

Right at the start I decided to name each book after an actual place. Once I’d chosen a rough location for the setting I’d check Google Maps until a name jumped out at me. Jamaica Plain is set in Boston. Montecito Heights is set in Los Angeles. Adobe Flats isn’t a real place; I stole it from the movie “Bad Day at Black Rock,” where Spencer Tracy visits Adobe Flat. As for SHELTER COVE, I was originally toying with Broken Shelter, but wanted to keep the same criteria for titles.

Knowing that I wanted to set the story on the California coast, with maybe a stop in San Francisco, I found Shelter Cove in Pacifica and the story wrapped around it. I never did work in a scene in San Francisco though, but I managed to set a short story there after I did the San Francisco Bouchercon.

How much of your series protagonist Jim Grant is drawn from your own background and experiences?

I’ve heard it said by many authors that their creations are often semi-autobiographical. I’d say Jim Grant is more two thirds. We talk the same, crack the same jokes, and both have a No Entry tattoo just above our… Okay, so maybe not that last part. That’s the character traits.

As for my experiences, not so much, since I’ve never worked in America. Oh, and he’s better at everything than I ever was. A bit of wish fulfilment there if you like.

Since you are grounded in the British justice and police enforcement system, how challenging is it to use an American setting?  Are there huge differences in the two justice systems?

If I were writing police procedurals, pretty challenging, but I’m not. I work on the theory that all cops want to catch bad guys and most cops follow the rules. I just don’t know the rules in America so Jim Grant doesn’t know them either; he simply does what feels right.

Also, there is the rather shady character who recruited him at the end of Jamaica Plain, so it’s not strictly accurate that Grant would get away with flouting the rules. He is expendable if the shit hits fan, except the fan shit hitting gets results so they keep him on.

As for the settings, I love visiting America. At first I’d do the Google Maps thing for the setting and build the story like a filmmaker might shape a movie sequence around the locations. Sometimes places suggest the next step in the plot and sometimes I change the place to fit what I want to happen. Now that I’ve travelled a bit more widely I can get the flavor from how it felt to me. I stayed at the hotel described in Montecito Heights and that’s why Jim Grant stayed there. I didn’t climb out of the window though.

You have written in several varied genres such as horror—even children’s books.  Is good writing good writing no matter the genre, or do you favor one genre over another?

I think it is, yes. I don’t think my writer’s voice changes from one to the other. I just cut out the swearing for the children’s books. I suppose my style has changed over the years but that’s just practice makes perfect. I started out writing horror because I love Stephen King. Salem’s Lot is one of my all-time favourites. I wrote four horror novels before Darkwater Towers became the first to be published, and a fifth before I realized I had a skill and knowledge that best suited crime fiction.

Then Joseph Wambaugh’s The Choirboys influenced me with my first police novel Through The Ruins Of Midnight. I wanted to write about uniformed police doing the night shift. That’s the book that caught the attention of Lee Child and Reginald Hill, and I was off and running.

The kids’ books are a different matter. Ideas pop into my head all over the place and some are crime and some are horror. Then there are little things that I find myself wanting to write about that are somewhat younger. I remember walking around the town centre once and looking up. Above the modern shopfronts the rooftops were old and there was a crumbling gargoyle holding up the gutter. Another time there was a news story on TV about a charity flight to Lapland for disadvantaged kids. All grist to the mill.

Do you prefer writing stand-alone novels or series?  Can you share how you keep track of character and back-story in a series?

When I began writing, each book was its own story. The characters lived in that book’s world and that world was done when I finished the story. I couldn’t imagine myself writing a series character and enjoyed creating new people for each story.

Then I wrote the gargoyles book and saw the potential for that story to continue, becoming a trilogy. My UK crime books, apart from the prequel to Midnight, were all stand-alones but set at the same police station. A bit like Ed McBain’s 87th Precinct books.

Some characters did cross over to make that world feel lived in until I wrote Blue Knight White Cross, which was based on a true incident but reshaped to fit my fictional world. It wasn’t until my agent at the time suggested setting my books in America that I came up with Jim Grant, an English cop abroad, and I truly embraced the series character. Now I love sending Grant on different adventures. It’s comforting to have a character that becomes your eyes into a strange world, in my case America.

Keeping track of the back-story? At first I just winged it, keeping his past in my head, but then twists cropped up that meant I had to keep track so I wrote a complete history and character traits bio. Just bullet points for the main things that shaped his life.

That changed dramatically with SHELTER COVE when I discovered something Grant was even keeping from himself. Some authors call it the character speaking to them. For me it was just a moment of inspiration that changed everything. Now the back-story is a bit more flexible. It’s that old unreliable narrator thing.

Since all authors have “real life” and promotional demands, can you explain how you discipline yourself to write?  Any hints for struggling authors?

I don’t have to discipline myself to write, it’s like breathing. I do it every day. Now that I’m not fighting crime anymore, it’s easier. Retirement is the best thing to happen to my writing. When I was in the police I’d have to fit it in around work. If I was on the late shift I’d write in the morning. Early shift, in the afternoon. On nights I’d write when I got up, even if it was just one page to keep the momentum going.

Promotional demands are dependent on success. I suppose Lee Child has more commitments than me, so I’m only offline from the book if I’m at Bouchercon or one of the other conventions. It’s great to catch up with friends and readers. But it’s great to get back to writing when it’s over. Otherwise there’d be nothing to promote. 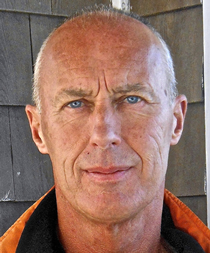