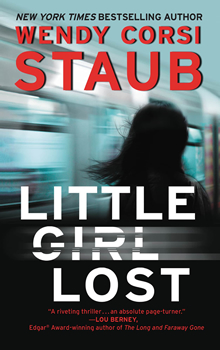 Wendy Corsi Staub has written more than 90 novels—many of which have hit multiple bestseller lists over the years—but she’s always wanted to write something bigger, something more intricate and complex, a book decidedly outside of her comfort zone.

LITTLE GIRL LOST is the result of that deep-rooted desire.

As the first in a thrilling new trilogy, LITTLE GIRL LOST follows the story of young protagonist Amelia Crenshaw who is determined to find out the truth about the birth mother that abandoned her—never suspecting that her journey will lead her straight into the path of a killer with a chilling agenda.

The book begins with an abandoned baby on a church step in 1968, alternating between that fateful time and 19 years in the future, twisting and turning through a plot rife with surprises, multiple characters, and mounting suspense that have become hallmarks of Staub’s work.

LITTLE GIRL LOST is a novel that Staub is proud to add to her impressive cache of published books—but she admits that her deviance from less complicated, more linear projects has been met with some unexpected pushback from fans.

“1968 was not a warm and fuzzy time,” she says. “And I realize that this book isn’t everyone’s cup of tea. I know that I can never please everyone, but my concern is that some readers feel betrayed. That’s certainly not my intent.”

Nor is it a sentiment shared by all. LITTLE GIRL LOST is already one of Staub’s better-selling novels, is attracting a new readership, and perhaps more importantly, has allowed her to stretch her writing muscles, diversify her characters, and be more free with plotting. 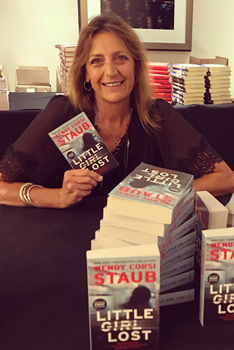 It’s also, quite frankly, the book Staub knew she wanted to tell—right now.

Inspired by the real-life story of her great-grandfather—who was left on church steps in a small Italian city when he was a baby—LITTLE GIRL LOST explores the questions that can arise when a child is abandoned. Questions that in the olden days were perhaps glossed over, while in today’s more technological and “instant” society, rife with online DNA and genealogy tests, it’s easy to get lost down the research rabbit hole.

“I like a good mystery and I like to solve them,” she says. “In this case, my family had a mystery and I wanted to solve it. I wanted to know who my great-grandfather was—not just for me, but for my grandmother, as well. It was all about family for me.”

Staub may not have solved the mysterious case of her beloved foundling relative, but her research did uncover some interesting historical data. For instance, she learned that in the Sicilian town in which her great-grandfather was born, “abandoned babies” was such a common thing that one of the churches built a rotating wall so that couples could leave their infants, ring a bell to alert the nuns, and slink away into anonymity.

“It’s not a very well-known fact,” Staub says. “But this book was born out of that idea.”

And with that story spark ignited, Staub set out to figure out how the pieces of her protagonist’s puzzle would play out. She opted for dual timelines—setting half the book in 1968, and the other in 1987, acknowledging that neither placed her in present-day. A definite shift in her usual M.O. that presented some additional challenges in terms of setting.

“In some ways, writing about the 80s was easier because I have memories of that time,” she says. “It was the dawn of the cell phone. Police procedures were different, beginning to be more technological. Whereas in the 60s, is was much more basic and old school. And this book has a missing persons theme, and back then, it used to be easier to disappear off the grid.”

These challenges resulted in a tremendous amount of research that ultimately had to be pared down to the essentials to retain the novel’s pulse-pounding pace.

“I like to pretend that I’m not on a deadline, and the research was so fascinating to me, that I put in too much detail,” she says. About 50,000 words too much detail, in fact. “I got so caught up in painting this picture of the past—but so much of it really didn’t need to be there.”

That’s not to say the work is unusable. Much of the information cut from LITTLE GIRL LOST will go into book 2, Little Boy Blue, the second in the series, slated for a summer 2019 release. In it, Staub says she plans to reveal more about her protagonist, whose back story truly created the blueprint for the trilogy’s overarching plot.

Though Staub has written numerous standalones, a middle grade and a young adult series, and contributed to a number of anthologies—the most recent, R. L. Stine’s Scream and Scream Again—Staub’s publisher prefers trilogies, a feat sometimes more difficult to achieve than Staub would like to admit, particularly if you’re more of a “fly by the seat of your pants” kind of scribe.

“When you’re writing a trilogy, you have to be more of a big picture plotter,” she says. “But I am totally a pantser. Sometimes you write yourself into a corner, but it’s the way that works for me.”

After 90 books, Staub has certainly honed her process, but despite so much success, she does have one achievement she’d like to add to her accomplishments—the ability to slow down. From the day her third grade teacher told her that her essay on Abraham Lincoln was good, Staub has had but one goal: to write full time. And she’s been doing that since she sold her first book—at an exhausting pace.

“Sure, a TV series or blockbuster movie about my books would be nice,” she says. “But that’s not what I’m about. Time always seems to get away from me. At some point, I’d just like to achieve an easier pace…”

Maybe spend time writing a less commercial book, or, as Staub is apt to do more and more these days, scroll through Facebook in search of great recipes.

“People always say that they don’t need to know what someone has for breakfast,” she says. “But I do. Go ahead and put that on your Facebook. I want to know!”

Fans might not find many recipes on Staub’s social media—but she does provide insight into her life beyond the books. And she probably wouldn’t mind you sharing a link to your favorite dish, either.