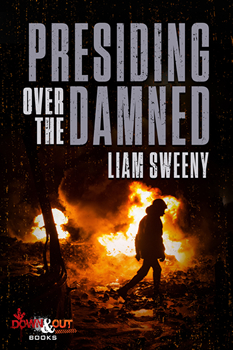 If the phrase “ripped from today’s headlines” weren’t so overused—and possibly trademarked by those Law & Order folks—I would use it to describe Liam Sweeny’s second Jack LeClere novel, PRESIDING OVER THE DAMNED (out now from Down & Out Books). Since I’m not going to use the phrase, let’s just agree that Sweeny’s novel could hardly be more timely than it is. Jack, a homicide detective in Upstate New York’s New Rhodes Police Department, not only has to deal with the lynching of a young black girl, he also has to navigate internal police politics and outside activists/agitators, all while recovering from the events of his last case, where his family was more than threatened.

Via email, I asked Sweeny to talk about one of the major themes of his latest novel: the role of race relations in today’s law enforcement field.

“That’s a tough one,” he said. “Especially in the context of a novel where the protagonist is a white detective written by a white author. I did a lot of research and found enough to fit on a flash drive. But the real experiences, the kind I can never have, would look like the Library of Alexandria.”

Sweeny pointed out that racial tension between police and the black community is a component of a broader social issue. “Police have the gun and a license to take life, liberty, and property,” he said. “At their worst, they’re the cut that slices the throat of the black community. I tried to get at this in PRESIDING OVER THE DAMNED—that racial tension between police and those they police is only one of the thousand cuts that make up institutional racism. It’s also dismal spending on black schools and businesses that don’t take a shot south of ‘that street.’ It’s the odds that the black offender has of doing jail time compared to the white offender who did the exact same thing. It’s the stop-and-frisks and the traffic stops because a black motorist ‘matches a description.’ Taken individually, you can explain them each away as harmless. But together, the net effect is a pervasive assault.”

But Sweeny also noted that his main character is a cop, and that PRESIDING OVER THE DAMNED is obviously not anti-police. “Jack naturally would see things a different way, and since I was writing through his lens, I had to know more than I showed,” he explained. “I don’t have a law enforcement background, but the region I live in is small, and it’s porous when it comes to cops sharing their job perspectives. … Cops have a tough job, and most are called upon to perform six or seven jobs that usually require master’s degrees. They pile on overtime, and they don’t know who might roll down the window of their car one night and decide that it’s judgment day. Some cops are racist, because they were people before they were cops, and we haven’t gotten past it as people. All cops rely on each other. Even the racist ones are called to back up an armed domestic violence call. We look at cops with such heroism that we never stop to think that the racist cops, the real scum, might not be so easy to dislodge from the force.”

In PRESIDING OVER THE DAMNED, Sweeny also tackles another kind of tension that often rears its head in crime fiction: the push and pull between local police and federal agencies. “I think a lot of the tensions come up with respect to public pressure,” he said. “Local law enforcement holds the public’s expectation that they will handle things. And when the public finds out the FBI is on it, they expect the case to be solved in 15 minutes, since the full force of the federal government has descended on Mayberry. So there’s a lot of stress, but it still takes time. Federal or local, half of the job is figuring out how the other side works it, and the other half is people being people and dealing with a personality stew in a pressure cooker. Plus there’s an active crime, and a perpetrator on the loose.”

Sweeny veers away from the bulk of crime fiction, though, by giving his lead character a wife and kid. I wanted to know what was behind that uncommon choice.

“I did that [to raise the] stakes,” Sweeny said. “I just saw Jack having a family. I read a lot of detective/P.I. novels where the protagonist is a drunk in that perpetual ‘nothing left to lose’ vibe. I wanted Jack to have something to lose. I wanted to create barriers to his self-destruction, and work within those barriers, to explore the space. Also, the New Rhodes PD is a family for Jack, so the theme of family was there from the get-go.”

Besides a roster of crime titles that includes the Jack LeClere novels and dozens of collected short stories, Sweeny has an impressive backlist of sci-fi books. I asked about the similarities and differences between the two genres.

“I got my start writing novels after I got back from New Orleans doing disaster relief for Hurricane Katrina,” he said. “I remember driving through the city, right after it was drained, and it was apocalyptic. My first book was a modern take on the Christian apocalypse, with a whole lot of sci-fi and action-adventure thrown in. Creating sci-fi is very technical, and it’s easy to revolve around setting or plot devices, but as I transitioned into mystery and crime fiction, I realized that it’s just as easy to revolve around setting and plot devices there. I would say the differences are that in sci-fi, I spend less time trying to get suspension of disbelief, because my readers know to meet me halfway. In crime fiction, I spend more time trying to get that suspension of disbelief, because I know my readers won’t give me an inch. They’ve never been on the surface of Venus, but they go to the gas station every day.”

Finally, what’s it like writing for Down & Out Books, an indie publisher?

“I love Down & Out. [Founder and executive editor] Eric Campbell is in it for the love. Yeah, he’s out to make a buck, too, but love bucks are honest bucks. It’s an underground. My only hope is that more people find Down & Out and the rest of the indie underground. As writers, we’ve got to touch on areas a major publisher might find risk-averse. There needs to be a midpoint between the multitude of self-published writers—some very good, all screaming into the blizzard—and the lucky few who get that break in the Big Five. I think Down & Out is an emerging presence on the scene, very fitting of that midpoint definition, and I love watching it grow.” 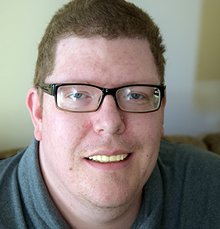 Liam Sweeny is an author and graphic designer from the Capital Region of New York State. His work has appeared both online and in print, in such periodicals as Spinetingler Magazine, Thuglit, All Due Respect, Pulp Modern and So It Goes: the Literary Journal of the Kurt Vonnegut Memorial Library. He is the author of the collection Dead Man’s Switch and the detective thriller Welcome Back, Jack.

To learn more about Liam, please visit his website.