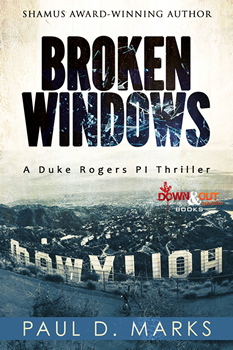 It’s 1994, two years after the Rodney King riots and the young TV actress Rebecca Schaeffer’s murder at the hands of a stalker. A political and social storm rages over California’s notorious anti-illegal alien Proposition 187.

When BROKEN WINDOWS opens, a young aspiring actress climbs atop the famed HOLLYWOOD sign and leaps to her death. At the same time, an undocumented day laborer is murdered, and a recently disbarred and desperate lawyer places an ad in a local paper headlined, “Will Do Anything For Money.”

It isn’t long before private investigator Duke Rogers finds himself smack in the middle of all this turmoil, when as a favor to Marisol, a housekeeper who works down the street, he offers to investigate the death of her brother, Carlos.

Ultimately, Duke must figure out what ties together Carlos’s murder, the ex-lawyer’s desperate ad, and the HOLLYWOOD sign jumper. With the help of his un-politically correct sidekick Jack, they’re catapulted into a labyrinth of murder, intrigue, and corruption of church and state that hovers around the immigration debate.

Death and Tinsel Town are made for each other. And if anyone knows this scene it’s Paul Marks, who grew up in L.A. and spent a good part of his career writing for the movies.

Now, Marks has pretty much given up all that and is far happier writing award-winning crime short stories and novels.

“I was pretty much frustrated with the Hollywood scene,” he explains. “When you write something in Hollywood, it’s not really yours. There are very few people in this industry who have control over their writing once it’s optioned. People like me are brought in to work on it, often without screen credit.”

Marks offers an example. “I had this great story set in New Orleans. It was a murder mystery with elements of voodoo. I optioned it to a producer and he wanted to bring in a ghost, a magic turkey leg that could do all kinds of mystical things. I know it sounds ridiculous, but it’s true. You lose control. Or, you’re a hired gun. I wanted it to be my vision. That’s why I turned to writing short stories and novels.”

As Marks indicates, collaboration between writer and producer can not only be frustrating, but also toxic.

“I was working with a producer to develop a script from his idea. I was warned by the person who put us together that he was difficult,” he says. “One day, I was on the phone with him and I was screaming at the top of my lungs. I put the call on speaker phone, just so my wife could hear that I wasn’t the only crazy person. He actually threatened to send his friends in the Mossad after me, so I’m still looking over my shoulder. He’s an actor, too, and to this day if I see him on TV, I just turn it off.”

Lucky for readers, Marks can’t as easily shut off his imagination.

Duke Rogers—his protagonist in White Heat and BROKEN WINDOWS—is a throwback to those classic PIs we all know and love, so it makes sense that among Marks’s inspirations are “Ross MacDonald, because of his psychological insights, James Ellroy because of his corrupt and sultry grittiness. But for me, Chandler with his elegant descriptions, metaphors, characters, and depiction of the mean streets, will always be at the top of my list.”

He also reveres David Goodis, “poet of the losers,” because “his stories deal with failed lives and people who are on the skids, and John Fante for his thinly disguised autobiographical tales of a struggling writer’s life in 20th century L.A. Those stories made enough of an impression on me that I actually wrote to him shortly before he died.”

“There’s a moral ambiguity in the work of these writers. They’re the equivalent of an Edward Hopper painting, which is another major influence on my writing, with its cold light and shadows, filled with a sense of alienation and angst. I like to write about the other side of the American Dream, where there’s an inner core of darkness and corruption in society, a feeling of fear and paranoia.”

But Duke Rogers did not just appear out of the blue, Marks explains. “There’s a lot of me in him, but I guess there’s a lot of me in all my characters. I wanted Duke to be a more modern P.I., dealing with modern problems. I teamed him with Jack, because he’s about the most politically incorrect person on the planet. He always says the wrong things but always does the right thing. While Duke is trying to make his way in the modern world, Jack is an anchor to the past.”

Marks admits to having other similarities with Duke. “We’re both quick to anger. I used to get into a lot of fights, both verbal and physical. And Duke has relationship problems with his father.”

Marks’s biological father was killed by a drunk driver when Marks was one year old. He was raised in what he calls “a typical middle-class family, with two younger brothers” by his stepfather, who was in the wholesale meat business, and his mother, who was a teacher. He went to San Diego State, and USC, majoring in cinema and radio-television.

“I always wanted to go into the movies, acting, but I wound up working as a script doctor—which means no glory, no credit.” Marks eventually took a short story class at USC with T. C. Boyle.

Moving from the screen to the page, Marks has done pretty well for himself: published three novels, co-edited two anthologies, and written countless short stories. He’s won a Shamus Award, was voted #1 in Ellery Queen Mystery Magazine’s 2016 Reader’s Choice Award, and has been nominated for Anthony, Macavity and Derringer Awards.

It’s been six years since White Heat, but now the sequel, BROKEN WINDOWS, will be published by Down & Out Books. The title, he explains, “refers to a theory that claims if you fix the broken windows in a neighborhood it will not be as crime-ridden. Duke’s attempt at finding out who murdered Marisol’s brother is a metaphorical way of fixing that broken window.”

Although Marks has pretty much left behind writing scripts, his training lingers. “I don’t really outline. I write as I go along. I often write the first draft of a novel as a screenplay, with just the dialogue, and in a sense that’s my outline.”

With BROKEN WINDOWS, Marks says, “I wanted to make it a story that deals with issues, besides being a mystery-thriller. And the issue of undocumented workers, which obviously resonates today, highlights the differences between Duke and his partner, Jack. It’s the classic P.I. and sidekick story but with a modern sensibility. It’s very timely and controversial within the context of a mystery-thriller.”

As Frank Capra once remarked, “If you want to send a message, try Western Union.”

And Marks is very aware of this. “My first thought is to keep the reader entertained.  I hope the story carries them on a on a trip to another time and place, and keeps them from putting the book down.”

Marks is working on another novel, The Blues Don’t Care, set during World War II, on the home-front. It centers on the only white musician in a swing band, who finds himself involved in a murder.

But somehow, I don’t think we’ve seen the last of Duke Rogers. 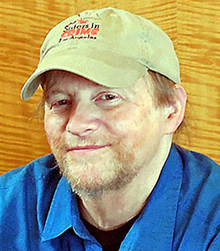 Paul D. Marks has written three novels, co-edited two anthologies and written countless short stories. He’s won a Shamus Award, was voted #1 in Ellery Queen Mystery Magazine’s 2016 Reader’s Choice Award and been nominated for Anthony, Macavity and Derringer Awards. His story “Windward” was chosen for The Best American Mysteries of 2018. His short fiction has been published in Ellery Queen Mystery Magazine, Akashic’s Noir series (St. Louis), Alfred Hitchcock Mystery Magazine, Crimestalker Casebook, Hardluck Stories, Hardboiled, and many others. Paul has served on the boards of the Los Angeles chapters of Sisters in Crime and Mystery Writers of America.