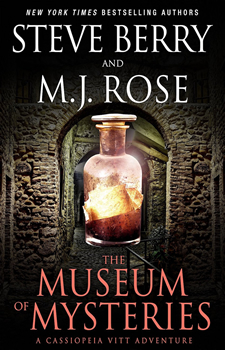 New York Times bestselling authors Steve Berry and M.J. Rose turn up the heat with a new novella featuring a character that will be familiar to fans of Berry’s work—Cassiopeia Vitt, known to many as Cotton Malone’s love interest in Berry’s long-standing thriller series.

In MUSEUM OF MYSTERIES, Cassiopeia guides readers from the small French mountain village of Eze, back and forth through time, in a thrilling journey that ends with a high stakes chase through the streets of Paris. Intrigue, secrets, mystery, and passion—it’s exactly the kind of story you’d expect when two of the genre greats put their minds—and pens—together, every page bearing the indistinguishable imprint of each author’s hallmark style.

From Berry, taut, fast-paced action that propels us deeper into Cassiopeia’s character, and from Rose, the lush description and magic that fully immerses the reader in a haunting atmosphere rife with romantic tension.

“None of the Cotton Malone adventures have sex in them,” the authors acknowledge. “So adding that element to one of Steve’s stories was certainly something new and different. We didn’t want it to be direct with Cassiopeia, as obviously she has a relationship with Cotton and he’s not an integral part of the story. But the sex worked well in the flashbacks.”

Those lush scenes are delivered through the use of modern day intrigue and ancient alchemy, creating a story that allowed the authors to each explore a different facet of the tale. For Berry, it was the chance to further delve into Arthurian legend, something he explored in a previous novella, The Tudor Plot. For Rose, inspiration came while learning about the actual history of Eze and its surroundings.  A few summers ago Rose and Berry—along with their respected spouses—took a trip to the South of France, where the idea for MUSEUM OF MYSTERIES began to percolate.

“We outlined the book together, scene by scene,” the authors reveal. “M.J. wrote the first draft, then Steve did a second draft.”

Together, they edited one more time, and voila, the novella was born.

The result is magical, but that doesn’t mean the collaboration was free from obstacles. Berry is self-admittedly short-story challenged—they’re not easy for him to write. Thankfully, Rose doesn’t suffer from that affliction, which allowed her to produce a workable first draft that together they could polish into an impressive merging of impeccable craft and storytelling.  Berry fans will relish the opportunity to better get to know Vitt, something Rose accomplished by immersing herself in the audio versions of novels and novellas in which the character is most prominently featured.

“I spent a few weeks listening to them in audio,” Rose says. “To get her into my head in the most direct way. Reading would have actually distracted me from her voice—but listening allowed me a more direct connection. I wasn’t too worried though, knowing that Steve was going to edit every word to make sure she conformed to the strong-willed, adventurous character he’d created.”

This kind of character immersion will only benefit Rose in the long run, as the dynamic writing duo have already planned to write a second Cassiopeia novella for 2019, the plotting of which will happen very soon. While there are no plans to co-write a longer project at present, fans of both authors have full-length novels to look forward to in the coming months.

Berry’s next Cotton Malone thriller takes his beloved character back overseas for the several international adventures, the first of which takes place in The Malta Exchange, releasing March 19, 2019.  And Rose’s upcoming release—TIFFANY BLUES—hits book stands next month, already garnering rave reviews. It’s the story of Jenny Bell, a 24-year-old artist who is invited to spend the summer of 1924 at Louis Comfort Tiffany’s prestigious artists’ colony at his Long Island Estate.

“It melds a tragic mother-daughter relationship with the jolting life of artists and their shocking jealousy, while it also explores an ill-fated romance about the jazz age,” Rose says. “It’s a story I’ve had simmering for years—ever since I learned about the fire that destroyed Tiffany’s estate—the origin of which remains a mystery today.”

Pick up your copy of TIFFANY BLUES on August 7.

The August 2018 Edition of the Big Thrill