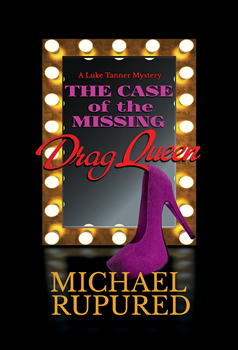 Broke, saddled with a mountain of debt, and dependent on his Aunt Callie’s support, aspiring writer Luke Tanner has returned to Kentucky to put his life back together after a failed five-year relationship.

On his twenty-fifth birthday, Luke meets diminutive Pixie Wilder, a long-time performer at the Gilded Lily. After headliner Ruby Dubonnet doesn’t show up, Pixie takes her place as the star of the show—a motive that makes her a suspect in Ruby’s disappearance.

Luke reluctantly agrees to help his newfound friend clear her name. He and Pixie set out to find the missing drag queen, and in the process, put themselves in danger.

Author Michael Rupured spent some time with The Big Thrill discussing his latest mystery, THE CASE OF THE MISSING DRAG QUEEN:

The story is set in 1982 when the local gay bar was the center of the LGBT universe. Much of the action takes place at the Gilded Lily, the showroom in a big bar complex called The Garden. It’s a nostalgic. Readers will come away with a clearer picture of gay life at a time when the gay lifestyle was largely hidden from view.

This mystery features a gay main character, a diverse assortment of supporting characters, and a story that is not erotica or m-m romance.

Writing THE CASE OF THE MISSING DRAG QUEEN brought back a lot of memories from my salad days. The big surprise was how seeing just how much things have changed. In 1982, MTV was in its second year and still played videos all the time. Madonna released her first hit. Pagers were high tech and telephones were connected to the wall with long cords.

I love Armistead Maupin’s Tales of the City series for memorable characters and real-life depictions of gay life. I also love the Southern flavor of Pat Conroy’s stories and the way he mixes humor and tragedy. I’m also a huge fan of James Patterson. In different ways, all three have influenced my writing.

Michael Rupured writes stories true enough for government work about gay life from the 1960s to today. This life-long Southerner was born in Fayetteville, NC, grew up in Lexington, KY, and after 18 months in Washington DC, moved to Athens GA where he’s lived since 1999. By day, he’s senior faculty in the College of Family and Consumer Sciences at the University of Georgia. He’s an avid fan of the Georgia Bulldogs, the Kentucky Wildcats, and any team playing the Florida Gators. In his free time, Michael tinkers with his garden, plays with Toodles (his diabetic Chihuahua), and keeps up with his many friends around the country. Previous novels include Until Thanksgiving (thriller), No Good Deed (mystery/thriller), Whippersnapper (regional), and Happy Independence Day (historical).

A Lady’s Guide to Etiquette and Murder by Dianne Freeman

The Glass Girl by Kim Alexander