A LADY’S GUIDE TO ETIQUETTE AND MURDER isn’t the debut one might expect from a woman who spent most of her adult life in the world of corporate finance. It’s a cozy historical novel set in the late Victorian era, and the heroine is an American heiress forced by circumstance to become an amateur sleuth. The few references to finance are plot-related, authentic to the period, and easily understood by even a layman like myself.

But maybe it’s not so surprising after all.

Author Dianne Freeman is a life-long book lover who pursued writing as a hobby throughout her corporate career and then co-authored a non-fiction book, Haunted Highway, The Spirits of Route 66, before quickly realizing her true love was fiction, historical mystery in particular. In short, she has spent years laying a solid foundation for this well-crafted debut.

Her research led to some unexpected insights. “Victorians weren’t so staid and uptight as I once thought,” she says, “nor were Victorian women meek. In fact, they were very much like we are today, only the technology has changed.”

Asked what authors inspired or influenced her career, she reveals two very different writers: “Edith Wharton, who made me fall in love with the late Victorian era, and Janet Evanovich, who showed me that humor and mystery could coexist.”

Thank you for taking the time to talk to us about your new book. Why don’t we start with a little bit about your writing journey and how you came to be a mystery writer?

I’ve been writing most of my adult life. Though I sold a few things over the years—articles and a work of non-fiction—I always considered it a hobby. I wrote fiction, both short and long, non-fiction, took creative writing classes, and attended writing conferences. Writing and reading were my favorite past-times and I indulged myself with them whenever I could. All that indulgence kept me learning and honing my craft.

A few years ago, I retired. Since I had more time for writing I decided to try my hand at what I loved to read most—historical mystery. A year and a half later, I’d finished my novel and needed some feedback. About that time, I learned of a contest called PitchWars, which is an opportunity to work with a writing mentor for two months then submit your novel to the “Agent Showcase.” I had nothing to lose, so I submitted my entry. And I got in!

My mentor pushed me to write better than I ever thought I could. When the Agent Showcase came, I received several requests, and 30 days later, an offer of representation from Melissa Edwards. I did another round of edits with Melissa and 60 days from signing with her, we sold the book as the first in a series to Kensington. While it took 35 years to get there, the last leg of the journey was head-spinning fast.

Can you tell us a little about A LADY’S GUIDE TO ETIQUETTE AND MURDER?

It’s the story of an American heiress whose family married her to a British aristocrat to increase their social status. In reality this was done with amazing frequency during the late Victorian era, which is when the story is set. It seemed like a poor basis for a happy marriage and I often wondered how things turned out for the couple ten years down the line. In this case, my heiress, Frances, is a widow. She’s done her duty to her family, she now has some freedom, and she’s eager to experience independence for the first time in her life. But when danger threatens, she steps in to protect her family.

I knew I was in good hands when I read about Frances turning up the wick on the paraffin lamp. What kind of research do you do to achieve that effect?

History fascinates me, and I spend quite a bit of time steeping myself in it; history books, books written in that era, museums, and newspaper archives, but I think some of the details I simply picked up from casual reading. While I’m drafting, I’ll write about a specific item, like the lamp, and wonder how I know this. I’ll flag it for further research and I’m often surprised to find out I was right. It’s amazing what you retain without realizing it.

Other details sent me digging through books and websites for hours. Technology was changing rapidly during this era and I needed to know not just whether something existed or was available, but how widely it was used and how well it worked. I love finding stories in old newspapers about how a new product, like automobiles, didn’t work and the aggravation they caused.

I loved how you developed the relationship between Frances and George. (I may be a little bit in love with George myself.) How do you balance the romance and the suspense in your books?

I think a cozy lends itself to more exploration of the characters’ personal lives. Because Frances is an amateur sleuth, the crime imposes itself into her life, so that life, and how it changes, is a large part of the story. She and George work together to solve the case so I thought just a touch of romance would add to the mystery. A burgeoning romance can be suspenseful in itself, especially between aristocrats who hide their thoughts and feelings behind a social veneer.

I was also guided by Frances, who is definitely not ready for a relationship yet.

Let’s talk about Aunt Hetty and the many other colorful characters in this book. How do you go about developing them?

I always think I know my characters well before I start drafting. I write full biographies for them and plot the crime(s) so I know what motivates them. But their true personalities never come out until I’ve finished the first draft. That’s when I really know them and understand their roles and realize I might be forcing them to act against character. Originally, Frances’ brother, Alonzo, brought her sister to London for the season. But he was too protective of his sisters, which just didn’t work, so Alonzo became Aunt Hetty. I like her much better in the role of chaperone. 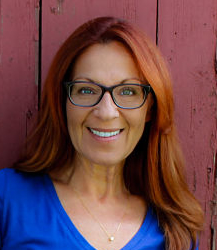 Dianne Freeman is a life-long book lover who left the world of corporate finance to pursue her passion for writing. After co-authoring the non-fiction book Haunted Highway, The Spirits of Route 66, she realized her true love was fiction, historical mystery in particular. She also realized she didn’t like winter very much so now she and her husband pursue the endless summer by splitting their time between Michigan and Arizona.

To learn more about Dianne, please visit her website.