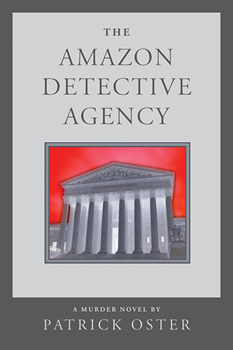 Melissa McGinty wants more than anything to be a full time, old-school detective like her father, who weaned her on black-and-white film classics featuring Sam Spade and Philip Marlowe. But her fledgling detective agency, run out of her home in suburban Washington, D.C. with an all-woman support staff, mostly attracts clients who want proof of their spouses’ infidelity so they can get more alimony.

To make ends meet, she moonlights as an overnight guard with the Supreme Court’s little known police department. Then late one night, a juicy murder falls into her lap when she discovers a dead justice on the floor of the judges’ private basketball court. A light bulb goes on that if she can solve the murder, she’ll be famous, and clients with real cases will come streaming through her door.

Her bosses, who normally take a low-profile approach to their jobs, have different ideas about her involvement in the case, which becomes front-page news after the FBI takes the lead in a crime that could affect who will be the next president of the United States.

On her growing list of suspects are the sitting president, whose election fate is headed for a suddenly evenly divided high court, alt-right fanatics who didn’t like the justice’s liberal rulings — with gun-rights activists right behind. And a stream of corporate executives, whose lawsuits got more winnable with the justice out of the way, make the list of probables even longer.

With the help of a shadowy cyber-expert, a super Internet researcher and a Tarot card-reading assistant who warns her of dangers, Mel persists in tracking down the killer. On the verge of being fired, she almost gets killed in the process as one misleading clue after another brings her closer to the truth. And the solution she comes up with is one of the least likely she could have imagined.

The Big Thrill caught up with Patrick Oster to discuss his latest thriller, THE AMAZON DETECTIVE AGENCY:

The enjoyment of a good murder mystery solved by a strong female detective character along with learning some useful facts about how the Supreme Court operates.

The main detective agency involved in solving the murder is an all-women unit that includes a hacker, an Internet whiz and a Tarot Card reader, led by a moonlighting member of the tiny Supreme Court Police Department who hopes to follow in the private eye footsteps of her fictional heroes Sam Spade and Philip Marlowe. Hence the name The Amazon Detective Agency.

How much motivation parties to Supreme Court cases have to influence the outcome, including breaking the law to do it. And how much that motivation increases if getting rid of one justice creates a tie-vote that leaves the winner in the lower courts the ultimate winner.

I continue to inform readers about how hacking can be an effective tool of detectives if they are willing to risk using it. That was a key premise of my previous thriller The Hacker Chronicles.

Patrick Oster, now writing fiction full time, was a managing editor at Bloomberg News and editor-in-chief of the National Law Journal. He has worked as a journalist for Business Week in Europe, Knight Ridder in Mexico and covered the White House, State Department, the Supreme Court and the CIA as Washington Bureau Chief of The Chicago Sun-Times. He is the author of the nonfiction book The Mexicans, a Book-of-the-Month selection. His award-winning comic thriller The Commuter was published by the Argo Navis imprint of Perseus Books. He also wrote the spy thriller The German Club and the cyber-thriller The Hacker Chronicles. His latest novel is The Amazon Detective Agency, a murder mystery. He is a member of the International Thriller Writers.