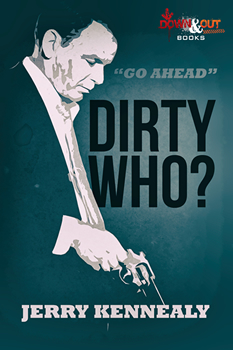 Rough and Tumble SFPD Inspector Johnny O’Rorke, the department’s Executive Protection Officer, has a new partner, Cosmo the Wonder Dog, a Lakeland terrier his sister has left in his care.

Pebble knows that O’Rorke has worked as a bodyguard for Sinatra. She hired Harly Walker, a local young artist and musician, to scout the city for locations that would appeal to Warner Brothers. Walker has disappeared and Pebble is desperate for O’Rorke to find him.

While searching for Walker, O’Rorke learns that several of Harly’s friends have been murdered in such a painful manner that even the medical examiner is shocked.

O’Rorke races to find the killer—and then comes the hard part: Telling Frank Sinatra that he is not right for the role of Dirty Harry.

Award-winning author Jerry Kennealy spent some time with The Big Thrill discussing the second installment of his Johnny O’Rorke series, DIRTY WHO?:

A feeling of the times and troubles of San Francisco in 1970.

How much the city has changed in 40 years and how much it has stayed the same.

Jerry Kennealy has worked as a San Francisco policeman and as a licensed private investigator in the City by the Bay. He has written twenty-two novels, including a series on private eye Nick Polo, two of which were nominated for a Shamus Award. His books have been published in England, France, Germany, Japan, Italy, and Spain. He is a member of Mystery Writers of America and Private Eye Writers of America.

He was the recipient of the 2017 Life Achievement Award by the Private Eye Writers of America.

Jerry lives in San Bruno, California, with his wife and in-house editor, Shirley. To learn more, please visit his website.

The Fifth to Die by J.D. Barker