A drowning in a local park is originally written off as suicide by the police until freelance journalist Hannah Weybridge is asked to investigate by the girl’s distraught aunt. Hannah discovers a pattern of Asian girls going missing and is convinced that Amalia was killed. But there seems to be no motive. And all the while Hannah is being stalked by her past, threatening her present.

The Big Thrill caught up with author Anne Coates to discuss the latest release in her Hannah Weybridge series, SONGS OF INNOCENCE:

So far I am delighted that readers have been swept along by the narrative and are engaged with Hannah and her life. There is cause for hope and optimism at the end which is more uplifting than the previous book, Death’s Silent Judgement.

The character Hannah Weybridge is a very different kind of investigator. A single mother and magazine journalist who is drawn into the world of newspapers. She’s not the hard-bitten, drunk PI or world weary cop common to crime friction. She can be naive and vulnerable but she always fights for justice even when that means her own life is in danger.

What always surprises me is how characters take on a life of their own and often lead me by the nose as I’m writing. Hannah’s world is dark and at times evil but so many of the crimes she investigates are prevalent today. 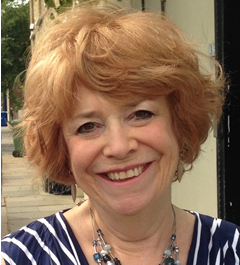 Prior to writing the Hannah Weybridge thrillers, Anne Coates was a freelance journalist and editor and short story writer. She draws on her own experiences as she portrays London set in the mid-1990s.

Anne lives in South East London – the backdrop for SONGS OF INNOCENCE – with three lazy cats who have yet to appear in her fiction. She loves film and theatre and sharing time with her family and friends.

To learn more about Anne, please visit her website.

Dirty Who? by Jerry Kennealy