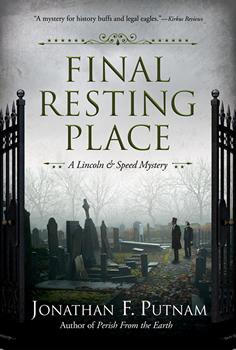 Twenty-nine year old Abraham Lincoln has spent his entire adult life running from his past — from the poverty of the dirt-floor log cabin where he was raised, from the dominion of his uneducated father, and from a failed early courtship. But now, in FINAL RESTING PLACE, the third book in the Lincoln & Speed Mystery series, Lincoln’s past is racing back to haunt him.

It is the summer of 1838 and Springfield is embroiled in a tumultuous, violent political season. When a prominent local politician is assassinated and his political rival is arrested, young lawyer Lincoln and his best friend Joshua Speed are on the case to investigate.

It’s no ordinary trial, however, as Lincoln and Speed soon face unwelcome complications. Lincoln’s ne’er-do-well father and stepbrother appear in town and threaten Lincoln’s good name and political future. And before long, anonymous letters start appearing in the local newspapers, with ominous threats that make Lincoln fear for himself and his loved ones. As the day of reckoning arrives, the threats against Lincoln continue to escalate. Lincoln and Speed must identify the culprit and fast, before Lincoln loses the race to outrun his past.

We think of today’s politics as nasty, but they are nothing compared to the politics on the American frontier of the 1830s. Back then, politicians routinely got into physical altercations with each other. In fact, FINAL RESTING PLACE is based on an actual political murder in 1838 that involved colleagues of the young Lincoln. One candidate for a key government position was accused of shooting his chief rival dead in the Gentlemen’s Smoking Room of Colonel Spotswood’s Rural Hotel. The accused man hired Lincoln to defend him.

In real life, and in my historical thriller, the two sides to the political murder case were represented by Abraham Lincoln, on the one hand, and Stephen Douglas on the other — the same Douglas who would make history two decades later as part of the famous Lincoln-Douglas Debates. So, 20 years before they debated the fate of the nation, Lincoln and Douglas squared off in a courtroom in Springfield, Ill. FINAL RESTING PLACE retells the story of their first battle.

I reveled in the historical worlds created by Caleb Carr in The Alienist and David Liss in The Coffee Trader.

I marveled at the puzzles created by Agatha Christie.

Robert Ludlum’s thrillers kept me up all night. After I read The Osterman Weekend (at age 12), I couldn’t sleep for days.

Jonathan F. Putnam is a writer and attorney. A graduate of Harvard College and Harvard Law School, he is a nationally renowned trial lawyer and recognized Lincoln scholar. He currently lives with his family in London, England. This is his third Lincoln & Speed mystery.

To learn more about Jonathan, please visit his website.