The Journey to Confidence 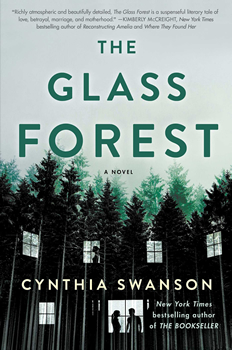 For writers, few fantasies are as alluring—or as misguided—as the idea that the terms “first novel” and “debut novel” are interchangeable. Cynthia Swanson, author of THE GLASS FOREST , knows a thing or two about the path that often stretches between the first book an author writes and the first one that finds its way into bookstores—a path that’s strewn with false starts, trial runs, and, well, books. Swanson had a couple of these so-called “trunk novels” under her belt before she received a pre-empt offer from HarperCollins for what would become her 2015 debut, The Bookseller, a 1950s-set alternate-reality tale about a bookshop owner who finds the lines blurring between the waking world and her literal dream life.

“The Bookseller was the third novel I wrote,” Swanson says. “The first one was strictly practice that I wrote when I was very young. The second one is something that I might go back to someday, but I would completely turn it around and tell it from the viewpoint of a different character. But that’s down the line a little bit. I’m working on a new one right now that doesn’t have anything to do with either of those.”

Since The Bookseller hit shelves in March 2015, it’s been translated into 18 languages and optioned as a big-screen vehicle for producer/star Julia Roberts. It’s an auspicious runway for Swanson’s follow-up release, which takes her back to The Bookseller’s mid-century setting but represents a marked departure in genre. THE GLASS FOREST trades The Bookseller’s alternate-reality fantasy for crackling domestic suspense with the story of a young wife and mother who slowly realizes that her new in-laws are harboring secrets that could burn her idyllic life to the ground. 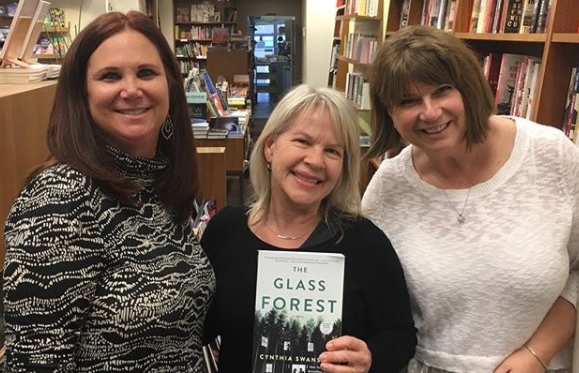 Swanson says the idea for THE GLASS FOREST actually predates The Bookseller, but the story, with its alternating points of view and a flashback-heavy timeline that stretches from the 1940s through 1960, was too ambitious to tackle right away.

“I knew it was really complicated and twisty plot-wise, and I just wasn’t at a place personally to work on something like that,” Swanson explains. “So I just sort of swallowed the idea and thought, Oh, I’m going to put that one aside and maybe get to it someday.”

“Someday” finally arrived, and THE GLASS FOREST grew from a simple but compelling idea: What would it be like to live in the house of a person who’d gone missing? Swanson eventually fleshed out the story of Angie Glass and her husband Paul, who receive news that Paul’s brother, Henry, has committed suicide after his wife, Silja, walked out on him, effectively orphaning Henry and Silja’s 17-year-old daughter, Ruby. With their own infant son in tow, Angie and Paul travel to Ruby’s insular hometown of Stonekill, N.Y., where they take up residence in the shattered family’s rural home—a foreboding, strikingly modern showplace tucked away in the forests of southern New York. The story unfolds in the alternating perspectives of its three female leads— naïve and idealistic Angie; worldly and secretive Silja; distant and cunning Ruby—as the Glass family’s tangle of secrets gradually unravels.

“I like stories where you have an ordinary character who gets put into a situation that’s outside of her realm of experience, and that’s what happens in this book with Angie,” Swanson says. “So it was that idea of, what would happen if you found yourself living in the home of a missing person? Wouldn’t you just be looking for clues around every corner and getting more and more suspicious? That was the beginning of the idea for the story, and I thought, Okay, where is that person? What happened to her? Who else is involved? Creating that three-way narrative between the three characters was something that came much later, after I stewed on the idea for years and years.”

While THE GLASS FOREST doesn’t bear many similarities to The Bookseller in tone or genre, it does have one major factor in common with Swanson’s debut: it once again finds the author mining the social turmoil of midcentury America. Swanson’s writerly preoccupation with the era began as a necessity of plot, but has since evolved into something deeper. 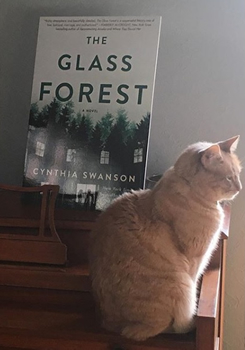 “When I started writing The Bookseller, it was initially set in the present day,” she says. “But the storyline of that book hinges on a missed moment that would not actually happen in the present day—because of technology, that moment just would not have happened, so I needed to bring that story back to an earlier time. The early 1950s became a really good fit. I just thought it would be fun—I like the music and the cars and the architecture [of the era]. But I started writing it and really got deeper into the social issues, particularly concerning women and work and family. When I finished that book, I felt like I wasn’t done exploring those topics. It was sort of a natural fit to go back and write another book, but one with an amped-up level of suspense that was set in that same time period.”

To bring those concerns into sharp focus, Swanson weaves in several historical incidents, including the Rosenberg executions, the rise of the John Birch Society, and the Peekskill riots of 1949. But those events are more than background color; they’re vividly rendered plot points that shape the lives of the book’s characters in dramatic, intensely personal ways.

“I think you need to do that anytime you set a book in a historical setting, particularly a near history like this,” Swanson notes, on the importance of weaving those cultural and historical touchstones into the fabric of her story. “It’s a time period that people remember, so it’s different than setting a book hundreds of years ago, where most people are just going to take your word for it. There are people who remember these incidents, so it’s important to get those pieces accurate. It really brings in the atmosphere of that time, especially that spooky unrest that was going on.”

Swanson happily acknowledges that THE GLASS FOREST, with its tale of a young wife haunted by the outsized reputation of a woman who inhabited a home before her, owes much to Daphne du Maurier’s 1938 gothic suspense milestone Rebecca. Readers might also notice shades of Shirley Jackson—a writer whose work highlighted the challenges faced by women in a society that often denied them control over their lives—lurking in the background. Swanson says it’s no accident that so many of the book’s characters, from the trio of women at its center to the secondary characters hovering at its perimeters, struggle with issues of agency and independence. 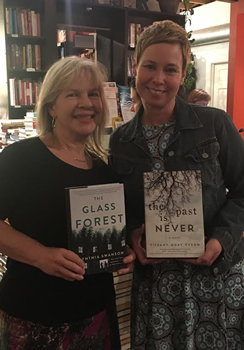 “I think a lot of this book, and the overall theme, is about confidence—gaining that confidence in yourself,” she says. “All of them do that in their own way. They start at a place and they don’t end up in that same place—they’ve covered a trajectory. We forget that, as a woman, you couldn’t just walk up to your husband and say, ‘I think I want a divorce, honey.’ Today, for most people, that’s what’s gonna happen if that’s what you want. But it wasn’t that simple back then. I think bringing in those historical [aspects] and seeing the places where we’ve made a lot of progress, and then realizing there are still so many places where we have a lot of progress to make—that contrast is interesting to me.”

Swanson aims to explore similar themes in her next novel, which she says will land somewhere between The Bookseller and THE GLASS FOREST in terms of tone and genre.

“It definitely has a level of suspense,” she says. “It’s set in the mid-’60s, so the social issues change a little. There are issues around Vietnam, civil rights, racial tensions, and other things that are going on there. It’s maybe got a little more heart than THE GLASS FOREST, but there are some elements that’ll keep you on the edge of your seat, for sure.”