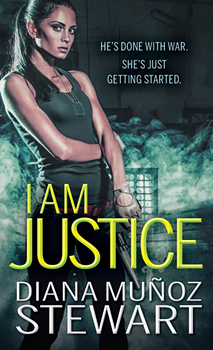 It’s hard to imagine a timelier hook than the one at the heart of Diana Muñoz Stewart’s Band of Sisters novels. Each installment will center on a different protagonist, but the characters are united by their allegiance to the League of Warrior Women, a covert sisterhood of vigilantes who tackle crimes against women all over the world.

The series kicked off in May with I AM JUSTICE, which has earned rave reviews in Publishers Weekly and BookPage. Stewart recently took time out of her busy schedule to talk with The Big Thrill about her latest book, her writing process, and the inspiration behind the fierce women who populate her new series.

Please tell us what your new book I AM JUSTICE is about.

The novel is about a secret group of female vigilantes that attempt to take out a sex-trafficking ring in the Middle East. More specifically, it’s about one of the members of this vigilante group, Justice Parish, and her quest to take vengeance on the men who killed her sister.

What links your books in this Band of Sisters series?

The books center around a family of female vigilantes that travel the world righting wrongs against women. Each of the three novels in the Band of Sisters series tackles issues of injustice and intrigue. So there are a few connections there, but more specifically, these three books are tied by an event that happens at the end of book one, I AM JUSTICE. Without giving too much away, during the ending there is a dynamic fight scene that has lasting repercussions for the family. It’s the fallout from this event that helps to shape the other two novels and the main characters. So not only is this scene referenced in the other two books, but it’s shown in the points of view of these other characters.

What inspired the overarching idea for this series?

Anger. Frustration. I’d been reading a lot of disturbing articles about the treatment of women globally. In particular, I remember reading about a small-town Mexican mayor, María Santos Gorrostieta Salazar. Despite threats to her life, being beaten, and [the murder of her husband], she boldly took on the Mexican drug cartels. Sadly, she was eventually killed herself. Her story was one of many that made me long for a kick-ass group of vigilantes that travel the globe righting wrongs against women.

I love the tagline on your website: “Romantic suspense for the strong of heart.” That can be taken several ways. Besides being action-packed, what in this new series tugs at the heart?

Having worked for a strong marriage, I would hope the romance between each of the couples in the series presents something honest and heartfelt about relationships, about learning who the other person is, and loving them even when faced with overwhelming hardships. In general, I think the Band of Sisters series is in a good position to examine relationships between men and women and how they can work together to create a better world.

You live a very active life: weight lifting, kayaking, running, flying. How much of your own activity spills over into your characters?

This is a great question. And the perseverance of being active does take shape in my characters, but funny enough, it also works the other way around. I started flying because one of my characters, Gracie Parish, flies. So the boldness of these kick-ass heroines is an inspiration to me to try new things and to challenge myself despite fear or uncertainty.

You are the product of an MFA program. How did that experience help you to write this series?

Stonecoast is a low-residency program taught at the University of Southern Maine. Not only did it introduce me to lifelong friends and critique buddies, it taught me how to step outside of myself, to examine my writing with a critical—less attached—mindset. It taught me technique and writing skills for sure, but I still think the most relevant part of the experience was recognizing the tunnel vision of my own writing. It helped me open up, question, and improve my storytelling abilities. That’s pretty important since I want my writing to be enjoyed by more than just myself.

It seems counterintuitive that The Little Mermaid is your favorite Disney movie. We each find inspiration in different, personal things. Can you explain why that movie spoke to you?

I think, deep down, every writer is looking for his or her voice. We want to share our experiences, connect with others, give voice to what is inside us. To me, that’s what The Little Mermaid is about. The movie deals with the very real issue of women giving away power, their voice, trading away what is most unique in the hopes of winning acceptance.

And maybe the charming prince.

But it’s not just about the prince for Ariel. In the movie, Ariel wants to be on land. She wants to “be where the people are” and experience the world too. In order for her to do this, she has to become acceptable to the land people. She has to silence her voice, use her looks instead. As Ursula says when she is trying to convince Ariel to give up her voice, “You’ll have your looks. Your pretty face. And don’t underestimate the importance of body language.”

That’s some big stuff. It’s that shut-up-and-look-pretty stuff. And as Ursula says, “It won’t cost much, just your voice.”

Wow. That sums it up right there. When you become someone else’s idea, an image rather than a fully fleshed out person, you give up your voice, you become less of yourself and have to work to get that back. And Ariel does. She discovers the truth. It’s those unique notes, the ones only she can give voice to, that make her song worth hearing.

Publishers Weekly’s review of I AM JUSTICE says, “…Stewart masterfully drags a series of red herrings into the tale before delivering a most unexpected traitor.” Can you give us an idea of how you plot and write?

Love that quote! I’m a somewhat reformed pantser. I’m not sure you can go into an MFA program a pantser and come out with exactly the same carefree attitude. (Does that go into the plus or minus column on reasons to get an MFA?) That being said, a lot of writing is organic for me. I can’t know every detail. My brain rejects that kind of strict discipline. So I start with an idea or theme and write out the beginning and end scenes. After that, I’ll do a character analysis, so I understand the players and basic motivations. And then I start writing and the story unfolds and evolves. Usually chronologically, but sometimes a sex scene or another powerful scene will nudge itself into my consciousness and demand to be written right away.

During the editing phase I wrestle everything down, smooth it out, and seed in or take out information to help strengthen the plot.

You obviously live a busy, demanding life. Any hints on how to balance real life with the writing life of the imagination?

Oh, boy. I’m writing the third book in the Band of Sister series and do not feel in any way qualified to answer this question. I guess the best I can do is to wrestle writing ideas down, making a note of them, when they try to interfere with my “real life.” And when that reality-based life tries to interfere with my writing… I’m still working on that. If you have any good books or articles on this subject, send them my way! 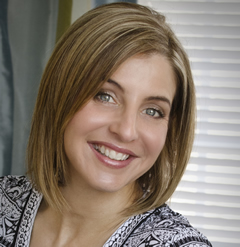 Diana Muñoz Stewart is the award-winning, romantic suspense author of the Band of Sisters series, which includes I Am Justice and I Am Grace and I Am Honor (Sourcebooks Publishing). She lives in eastern Pennsylvania in an often chaotic and always welcoming home that—depending on the day—can include husband, kids, extended family, friends, and a canine or two.

When not writing, Diana can be found kayaking, doing sprints up her long driveway—harder than it sounds–practicing yoga on her deck, or hiking with the man who’s had her heart since they were teens.