The Art of Being Ghoulish

“It’s hard to pinpoint the exact alchemy of color, design, smarts and emotion that leaps off the page when you encounter good pop art, but whatever it is, the work of Gary Pullin qualifies, with a visual punch that lingers in the mind.”

So begins Larry Fessenden’s introduction to GHOULISH, a riveting and beautiful expose written by April Snellings into the life and art of the iconic Gary Pullin, an artist whose work you have certainly seen—and by which you’ve no doubt been affected.

For Snellings, the true impact of his art dates back to 2009, when Pullin illustrated the cover of Rue Morgue’s Ray Harryhausen’s tribute issue.

“It’s a mash-up of some of Harryhausen’s most memorable creatures,” Snellings says. “The Cyclops from The Seventh Voyage of Sinbad, the skeletons from Jason and the Argonauts, the rhedosaurus from The Beast from 20,000 Fathoms, etc.—and it just leapt off the newsstand at me. I knew I had to write for Rue Morgue, got in touch, and had my first assignment by the end of that year.”

Snellings with the cast and crew of “Food Chain,” her episode of Tales from Beyond the Pale. From left to right: Jeremy Gardner, Larry Fessenden, Sean Young, Glenn McQuaid, Snellings, Drew Moerlein, and Jason Yachanin

The gig allowed her the opportunity to work with Pullin, who at the time was the magazine’s art director. They quickly formed a mutual admiration society, and when Pullin left a few years later to pursue his art full-time, Snellings followed his career as both a friend and fan.

The latter is evident from the very beginnings of GHOULISH—an ambitious text that encompasses hours of conversations between Snellings and Pullin, distilled into engaging bite-size Question and Answer segments that reveal the key artistic milestones in the artist’s formidable career.

“To me, Gary’s art strikes such a chord because he presents familiar, beloved genre properties in surprising, inventive ways,” Snellings says. “A great example is the Scream poster he did for Mondo a couple of years ago. By channeling Roy Lichtenstein, he’s giving pop art the same meta treatment that Scream gives slasher movies. Or his Monster Squad vinyl package art for Mondo’s soundtrack LP release—it’s all in the style of vintage monster magazine mail order ads, so it pulls you into the world of the movie. You want to sit down with that album and read every word, analyze every image, just like you did when you were a kid and you got a new record. Scream and The Monster Squad are two of my favorite movies, and Gary’s art let me experience them in new ways. That’s a rare, wonderful treat for genre fans.”

But with so much material to draw from, organizing it became a challenge.

Snellings wanted to create a cover-to-cover read that paid tribute to Pullin’s work as a whole, and still provide satisfaction for fans keyed into one style—such as the “poster” chapter, which holds special sentiment for Snellings.

As a collector, she was keen to pick the artist’s brain on the whole business of movie poster design, and in the process uncovered a few interesting gems.

“What really stands out is the degree to which an artist’s choices are influenced by practical matters such as likeness rights,” she says. “Many actors are sensitive about how their faces are drawn or painted, and some are reluctant to assign likeness rights at all, so it’s entirely possible that an artist could be officially licensed to create a movie poster without being allowed to use the faces of the principal actors.”

Pullin has some great stories about that, Snellings says, including an instance where Drew Barrymore—an actress famously protective of her likeness—immediately approved Pullin’s Scream poster, but there was another poster where the actor—who shall not be named—took issue with how their nose was represented.

“Gary kept getting detailed but rather bizarre notes about the anatomy of noses, even though he was working from photos and his image was accurate,” Snellings says. “Maybe it’s just me, but I live for stories like that.”

As a trained journalist—and contributing editor of The Big Thrill—Snellings was able to tease many of those kinds of stories from Pullin, admitting that her prepared questions often took the interviews “off-script” when interesting topics came up.

It’s an obvious labor of love, and one that resonates with fans of the genre. Official release isn’t until May, but 1984 Publishing released several pre-order options— two that come with 3D art prints and branded 3D glasses, and two that come with a limited edition, first-time-on-vinyl 12-inch record featuring music by legendary soundtrack artists Goblin [Dawn of the Dead, Suspiria]—which are already sold out, earning GHOULISH a coveted Amazon bestseller ribbon. 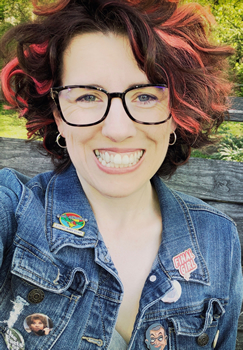 That kind of attention bodes well for Snellings, who is mid-pitch on a second project with the publisher—an art-focused, horror-themed book with cool extras. If everything falls into place, she hopes to announce that project this summer.

In the meantime, Snellings is working on her fist work of fiction, a young adult novel called The Electric Girls.

“It’s set in a fantastical version of 1930s America, and it’s about a teenage special effects wiz who finds that the devices she builds to create creepy illusions for dark rides and midnight spook shows really can reanimate the dead,” Snellings says.

Given Snellings’s love of the genre and mastery of the craft, it sounds like a slam dunk.