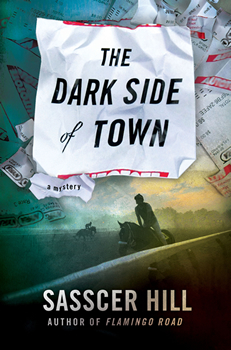 Fia McKee, now officially employed by the Thoroughbred Racing Protective Bureau (TPRB), is sent undercover to Saratoga Racetrack to investigate Mars Pizutti, a racehorse trainer whose horses’ wins are suspiciously lucky—and lucrative. Fia’s bosses believe Pizutti’s success is based on illegal drugs and deceitful methods, and they want Fia to work inside his barn to ferret out the truth.

But after witnessing the tragic and inexplicable suicide of a jockey, Fia discovers the rider’s death is only the tip on an iceberg involving the mob, a crooked racing hedge fund, and threats to the lives of another jockey and his young sister. Fia must find out who’s connected to who, and what shadowy forces are at play before someone else dies.

The Big Thrill caught up to author Sasscer Hill just in time to discuss her latest mystery, THE DARK SIDE OF TOWN:

It shows a picture of good against evil different from anything written about crime when only humans are involved. There are evil people who think nothing of drugging a horse so that it cannot feel pain and will run until it breaks. And there are people willing to give their lives to protect the animals they love.

The fascinating shenanigans allegedly behind Big Brown’s failed 2008 bid to win the Triple Crown. No one ever understood or explained why Jockey Kent Desormeaux eased the horse in the stretch of the 2008 Belmont. My research revealed a number of juicy clues, from a crooked trainer, to a shady hedge fund–all the elements for a great novel were there.

That it’s a sexy book. That Fia McKee’s relationship with Cuban American Calixto Coyune becomes more intense as she resists falling for an undercover agent who is a trained, professional liar. That a splendid resort destination like Saratoga might have a dark underbelly.

As a child Walter Farley was a huge influence because his detailed novels about the Black Stallion were suspenseful, and impossible to put down. Only recently did I learn that Farley’s brother was a horse trainer in New York and provided much of the accurate details of backstretch life that gave Farley’s books such authenticity. Since I graduated from Dick Francis and started writing my own novels, my main influences have been Michael Connelly, Lee Child, Robert Crais, and Steve Hamilton because they are all such damn good writers! 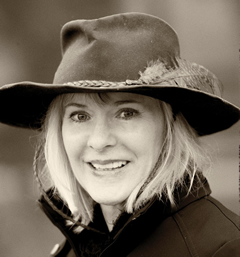 Author Sasscer Hill was involved in horse racing as an amateur jockey and racehorse breeder for most of her life. She sets her novels against a background of big money, gambling, and horse racing, and her mystery and suspense thrillers have received multiple award nominations, including both Agatha and Macavity Best First Book Awards, as well as a nomination for the Dr. Tony Ryan Best in Racing Literature award.

THE DARK SIDE OF TOWN, out April 2018, won the Carrie McCray 2015 Competition for First Chapter of a Novel, as well as a 2015 Claymore Award nomination for best unpublished mystery-thriller.

To learn more about Sasscer, please visit her website.