The first thing I noticed about Marty Wingate’s books was that they are very British. Reading her latest, FAREWELL, MY CUCKOO, I felt like I was strolling through the English countryside, meeting eccentric characters and soaking up the local ambience. These are the kind of charming books the word “cozy” was made for.

This newest book is part of the Birds of a Feather series, which follows Julia Lanchester, a bird lover who runs a tourist office in a Suffolk village. But one series isn’t enough for this bestselling author. She also writes the Potting Shed books, featuring Pru Parke, a middle-aged American gardener transplanted from Texas to England.

The Seattle native writes convincingly about Suffolk and other British locations. “England feels like a second home,” she explains. “My husband and I travel to Britain once or twice a year, and we’ve spent enough time that it’s easy for us to slip into the life. We stay with a friend in the Cotswolds and also spend time in Suffolk, in the village I’ve used as a model for Smeaton-under-Lyme, and where I’ve found inspiration not only for Hoggin Hall, but also Nuala’s Tea Room. Research is rewarding.”

Asked about her writing journey, Wingate says, “From writing stories in my room as a girl—and during recess when I should’ve been running and jumping—I wandered into other worlds and ended up with a degree in drama and then a graduate degree in speech therapy. Years passed, and I acquired yet another degree, this one in urban horticulture, after which I wrote how-to garden articles and books. I grew tired of non-fiction and with the slightest nudge from a friend, tumbled into writing mysteries—first, a series set in the garden and next, a series about birds.”

Wingate has taken to heart the adage “write what you know.” A member of the Royal Horticultural Society and the Royal Society for the Protection of Birds, she’s written five books on gardening and leads small-group garden tours to European destinations, including England, Scotland, Ireland, and France. These excursions are the antithesis of your typical tour—no rigidly scheduled events and one-night hotel stays. Instead, she emphasizes getting to know the area’s people, history, and culture. This means her schedule always leaves room for “a cup of tea, a pint of beer, or a glass of wine.”

Or a visit to the pubs.

We welcome Wingate to The Big Thrill.

I love the title of your new book. Where did FAREWELL, MY CUCKOO come from, and why did you choose it for this book?

Book titles and book covers, as my agent says, are committee decisions. Occasionally I’ve hit the mark, but more often I bow to the powers of my agent and publisher. I got lucky with The Rhyme of the Magpie, because there is an actual rhyme, but had no ideas for the next two books in the series. As I considered a storyline for this one, I read a piece from the Royal Society for the Protection of Birds about the decline in number of cuckoos. Without warning, FAREWELL, MY CUCKOO flew into my head and roosted. (Sorry, couldn’t help that.)

How do you handle the ongoing romance between Julia and Michael? What are the challenges of portraying the development of that romance over the course of a series?

As with most authors, I write what I like to read, and I enjoy a book that threads a romance through the main plot. I believe it increases my opportunity to both add danger and comfort to the storyline. When there’s a romantic interest, the protagonist has more at stake—she worries not only about those involved in the murder, but also about her relationship. Michael worries that Julia will put herself in danger (she never intends to, but …). I like the intimacy and the arguments and the eventual deepening of the relationship.

Tell us a little bit about Julia. What makes her the perfect heroine for a mystery series?

She’s quite detail-oriented and good at remembering mundane tasks, such as renting the right number of chairs for an event or making sure someone arrives early enough to put the coffee on. I believe this makes her pay attention to the details of an investigation. Also, she’s not afraid—either to speak her mind or go after a suspect. This can cause a problem or two, but she’s been assertive her whole life, something I like to show through conversations with her sister, Bianca.

Julia knows Michael is planning to pop the big question, but events keep conspiring to interfere with his “perfect moment.” How does this mutual frustration influence the plot and tone of the book?

I certainly hope it adds some humor through all that frustration. Poor Michael, he so wants this to be memorable. It causes home life to be uncomfortable, because they have no privacy with a houseguest in such a tiny cottage. Michael often takes his frustration out on his sister, and I love showing that brother-sister relationship—fighting one minute, laughing the next. Also, Michael finds Gavin Lecky an easy target. Julia is frustrated because she’s pretty much told everyone under the sun that the engagement was imminent and now family and friends expect a big announcement. The murder mystery becomes a good distraction for both Michael and Julia.

Of course, the reason for their frustration is the unexpected arrival of Michael’s sister. Pammy is a colorful yet believable character. Where did you get the inspiration for her, and what is her role in fulfilling the theme of the story?

I had no idea the impact Pammy would have on readers, but after both my agent and my editor told tales of their own Pammys moving in and overstaying their welcomes, I decided Pammy is rather the “everyperson” of this story. I suppose we have all known someone like her (or perhaps once been like her ourselves?) and so we can relate instantly. My goal was to turn that really annoying cuckoo in Julia and Michael’s nest into more of a human.

Cozy romantic mysteries are consistently popular. What’s the secret of their lasting appeal?

Cozy mysteries are comfort, danger, humor, excitement, more danger, and then comfort once again. Stories begin by moving out of the protagonist’s comfort zone to teeter on the edge of disaster, then slide headlong into a great mess. Often, while she inserts herself into the murder investigation, the protagonist also deals with love or home issues (the subplot!), which adds to the threat of impending disaster. But, like the Saturday afternoon serial at the movies, she pulls a solution out of her back of tricks at the last second! So, all in all, cozies are great fun. 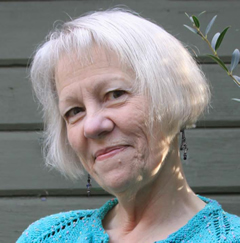 To learn more about Marty, please visit her website.