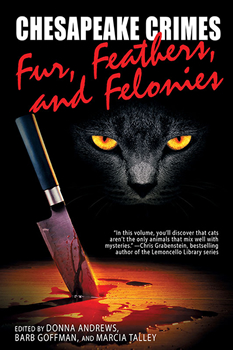 Editors Barb Goffman, Donna Andrews, and Marcia Talley have pulled together 13  authors from the Chesapeake Chapter of Sisters in Crime for FUR, FEATHERS, AND FELONIES, the wonderfully eclectic eighth volume of the award-winning Chesapeake Crimes anthology series.

The latest entry is all about critters of the furry, feathery, and even boneless kind. There’s nothing as macabre as “The Black Cat” or as frightening as that Baskervilles mutt, though—these entertaining stories are suspenseful and even filled with a spontaneous sense of humor. Where else can you build a murder around an octopus, have a crow solve a crime, or read a story told by a most unlikely bard? Looking for a dog and pony show? How about a dog, cat, bunny, crow, octopus, rat, and, oh yes, an exploding-cow show instead?

The stories are as diverse as the animals that drive their plots. The collection kicks off with Shari Randall’s “Pet,” about a dog groomer and her boyfriend who get mixed up with a rather unpleasant and wealthy client. Next up is Carla Coupe’s “As the Crow Flies,” which travels back to the mid-19th century for the tale of Hermes, a family crow who helps to solve a dastardly crime in the English countryside.

Despite the title, KM Rockwood’s entry, “Rasputin,” is not about a devilish mountebank; rather, Rockwood sheds some light on what Lassie and Rin Tin Tin were really thinking about: that when dogs aren’t helping to save lives, all they really want is to eat, sleep, and play. The next tale also features a canine theme: “Bark Simpson and the Scent of Death” sounds like the title of an Indiana Jones story, but author Alan Orloff subverts expectations by letting a Shih Tzu solve police cases.

The lineup continues with “A Snowball’s Chance,” where Eleanor Cawood Jones spins an intriguing cold case about a fish and a bunny named Snowball. In “Hunter’s Moon,” private investigator-turned-author Robin Templeton takes us on a walk through a story about an Irish setter named Rupert, while volume editor Barb Goffman has some bovine tips on how to relieve that bloated feeling in a surprising way in “Till Murder Do Us Part,” a whodunit about one hot cop and a crime of passion.

Marianne Wilski Strong takes us back in time to a bar in Scranton, Pennsylvania, with “Your Cheatin’ Heart,” which features a tot who solves the crime. It took Linda Lombardi eight slimy arms to wrangle “The Octopus Game,” a story about death and a fish tank. Josh Pachter’s study of military science in “The Supreme Art of War” uses emotions more than science, or perhaps a bit of both.

In “Killer,” Joanna Campbell Slan gives us a Chihuahua named Jonathan—a caregiver’s best friend in an otherwise miserable situation—while Cathy Wiley spins a tale of cats, rats, and a body in “Curiosity Killed the Cat Lady.” Finally, Karen Cantwell’s “Sunset Beauregard” reminds us that there’s more than one dog in Hollywood.

To learn more about Sisters in Crime’s Chesapeake Chapter and the authors featured in FUR, FEATHERS, AND FELONIES, visit chessiechapter.org