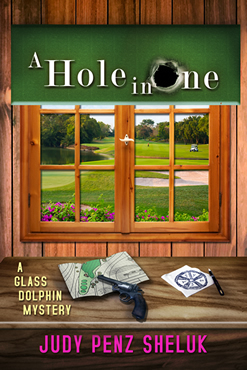 Hoping to promote the Glass Dolphin antiques shop, co-owners Arabella Carpenter and Emily Garland agree to sponsor a hole in one contest at a charity golf tournament. The publicity turns out to be anything but positive, however, when Arabella’s errant tee shot lands in the woods next to a corpse.

They soon learn that the victim is closely related to Arabella’s ex-husband, who had been acting as the Course Marshal. With means, opportunity, and more than enough motive, he soon becomes the police department’s prime suspect, leaving Arabella and Emily determined to clear his name—even if they’re not entirely convinced of his innocence.

Dogged by incriminating online posts from an anonymous blogger, they track down leads from Emily’s ex-fiancé (and the woman he left Emily for), an Elvis impersonator, and a retired antiques mall vendor with a secret of her own.

All trails lead to a mysterious cult that may have something to do with the murder. Can Arabella and Emily identify the killer before the murderer comes after them?

A HOLE IN ONE author, Judy Penz Sheluk, took some time out of her busy schedule to discuss her latest mystery with The Big Thrill:

The area is loosely based on towns/cities in Ontario, Canada, where I live. There’s no Lount’s Landing, though there is a Holland Landing (where I lived for many years). However, there is a Collingwood, complete with an annual Elvis Festival, which plays a part in the book. There’s also an indoor PATH in downtown Toronto, where I, like Emily Garland, always get hopelessly lost. And there really is s small town in Northern Ontario called Goulais River. So hopefully, they’ll learn a bit about Canada, and accept that great liberties have been taken. Also that you don’t have to know anything about golf to enjoy the book.

I like to think of my books as “amateur sleuth with an edge.” There’s the requisite small town, amateur sleuth, and no overt violence, bad language or sex, but there are also no cats, crafts or cookie recipes. I think most cozy readers will enjoy that distinction. I’ve tried to write a series I would want to read.

I learn something from every book, because I’m huge on research and I love antiques. In this book, I discovered quite a bit about Rebellion boxes. Prison inmates made them in 1837 and 1838, usually carved with a political message fighting colonial rule in Canada. Lount’s Landing is named after Samuel Lount, a real-life Canadian politician, hanged for treason in 1838. His last words were “Canada shall yet be free.”

Readers who read book one, The Hanged Man’s Noose, know that protagonist Arabella Carpenter has a complicated relationship with her ex-husband, Levon. It gets more complicated in A HOLE IN ONE. Let’s just say Arabella should avoid cognac.

So many. Nancy Drew. Agatha Christie. John D. MacDonald, Ed McBain, Dick Francis. All were early influences that taught me the importance of structure and story. Later, Sue Grafton, who improved with every book, A to Y, such a loss to our community. John Sandford, the master of pacing (I’m in awe of him). Most recently, Fiona Barton, for being brilliant. I’m a writer, but I’m a reader first and foremost. If I put a book down, not compelled to stay up another hour, I ask myself, “why?” If I can’t put it down, I ask myself, “How can I replicate that technique?” Reading is the best teacher. 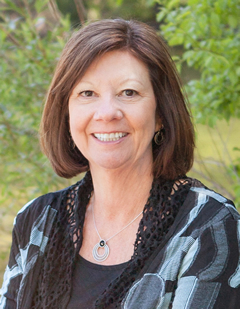 Judy Penz Sheluk is the author of two mystery series: The Glass Dolphin Mysteries (The Hanged Man’s Noose and A HOLE IN ONE) and The Marketville Mysteries (Skeletons in the Attic). Judy’s short crime fiction appears in several collections. She is a member of Sisters in Crime, International Thriller Writers, the Short Mystery Fiction Society, and Crime Writers of Canada, where she currently serves on the Board of Directors as the Regional Representative for Toronto/Southern Ontario.

Find Judy on her website/blog, where she interviews and showcases the works of other authors and blogs about the writing life.