No one takes down deranged killers like L.A. detective Brick Morris. But a crazed maniac is savagely murdering Hollywood starlets and sending Morris grisly calling cards. And that’s just the first phase of a fiendish “death machine” the relentless killer plans to unleash on Los Angeles. Every move Morris makes triggers another step in the psychopath’s doomsday scenario. Morris has only one choice to stop the killings: the one the killer never expected…

I’m hoping readers will find MALICIOUS an exciting and terrifying thriller that will keep them turning pages late into the night. MALICIOUS is the third Morris Brick thriller, and as such, readers will also get to revisit Morris, his charming wife Natalie, his bull terrier Parker, and the rest of the MBI (Morris Brick Investigations) team.

The killer in MALICIOUS has built an elaborate Rube Goldberg machine, and this forced me to construct an equally elaborate and intricate plot that I hope will keep readers guessing until the very end.

As the third Morris Brick thriller, it builds on the foundation laid out by Deranced and Crazed. The killer, his backstory, and motivations I think are unique for this genre, and the stakes are certainly higher than any serial killer thriller I’ve yet encountered.

Hammett’s Red Harvest made me want to be a writer, and Jim Thompson’s Hell of a Woman helped me find my voice by showing me you break every rule as long as you can make it work. 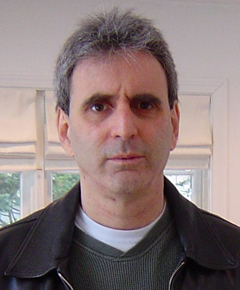 Jacob Stone is the pseudonym for award-winning author Dave Zeltserman. Dave’s crime and horror novels have been picked by NPR, the Washington Post, American Library Association, Booklist, and WBUR as best novels of the year, and his short mystery fiction has won a Shamus, Derringer and two Ellery Queen Readers Choice awards.

Dave’s crime noir novel, Small Crimes, has been made into a major motion picture starring Nikolaj Coster-Waldau, Molly Parker, Gary Cole, Robert Forster, and Jacki Weaver, and will be premiering April 28th on Netflix. Several of his other books are currently in film development.